The Golden-Tongued Beltsnake is a medium-sized snake, typically growing 3-4 feet in length, although specimens of over 6 feet have been observed.  The Beltsnake looks like its namesake - it is thin like a leather belt.  It is brown in color, with a patterned back that looks like fretted knots and diamonds.  Its scales are smooth to the touch, but break into sharp shards, like glass when damaged.  The scales surrounding the head of the Beltsnake are much thicker and tougher.   The Golden-Tongued Beltsnake does not actually have a golden colored tongue, but instead has a long prehensile tongue ending in a barbed bone fang scholars call the snake's "harpoon".  The harpoon is hollow and dispenses a poison which causes most animals to feel extreme fear and floods them with adrenaline.  This poison is a defense mechanism for the beltsnake against larger opponents; they do not use the poison when hunting prey for food.   The Gold-Tongued Beltsnake does not have regular fangs or teeth in its mouth, but instead has a bony upper jaw plate with toothlike extensions.

Golden-Tongued Beltsnakes are egg layers.  They typically only lay 1-3 eggs at a time.  Beltsnakes have a hollow "pocket" under their chin where they will carry their eggs until they harden enough to hatch.  Gestation of a beltsnake egg typically takes about one month.    Beltsnakes have a year-round reproductive period.

Golden-Tongued Beltsnakes prefer temperate climates, especially forests.  While not skilled climbers, they can hide in the fallen brown leaves in the forest floor.  Fruit orchards in particular can should watch out for nests of beltsnakes.

Unlike typical snakes, when beltsnakes do not molt and shed their skins.  Instead, as individual scales get damaged or old, they will fall away and be replaced with a new scale growing just beneath it.   While beltsnakes in their preferred environment are active year-round, in much colder climes they will hibernate.

Although some are still foolish enough to hunt the Golden-Tongued Beltsnake, thinking that its tongue is made of solid gold (a myth that still crops up among the ignorant), most beltsnake hunters seek them out for one of two reasons. First, the scales and leather skin of a beltsnake is prized for belts, particularly sword belts and baldrics, as the scales provide a protection to the belt against enemy blows. for a time, having a Golden-Tongued Beltsnake-skin belt was a status symbol among certain nobility.   Other hunters look to collect beltsnake poison. These persons may attempt to trap live beltsnakes to milk the poison from the harpoon, but unscrupulous hunters have been known to simply kill the snake and harvest the poison producing organ from its location in the back of the throat behind the base of the tongue.

Unlike other snakes that use their forked tongues to smell their surroundings, beltsnakes have their olfactory senses in their nostrils.  Golden-Tongued Beltsnakes can also see beyond the visual range to see heat signatures.  Their vision is sensitive enough that they can see trails where warm-blooded creatures have passed recently. 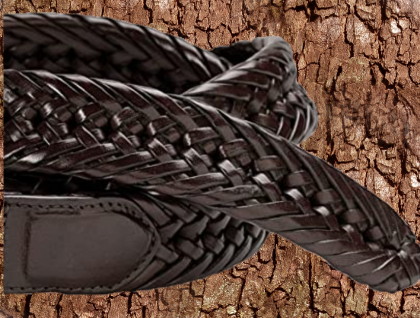