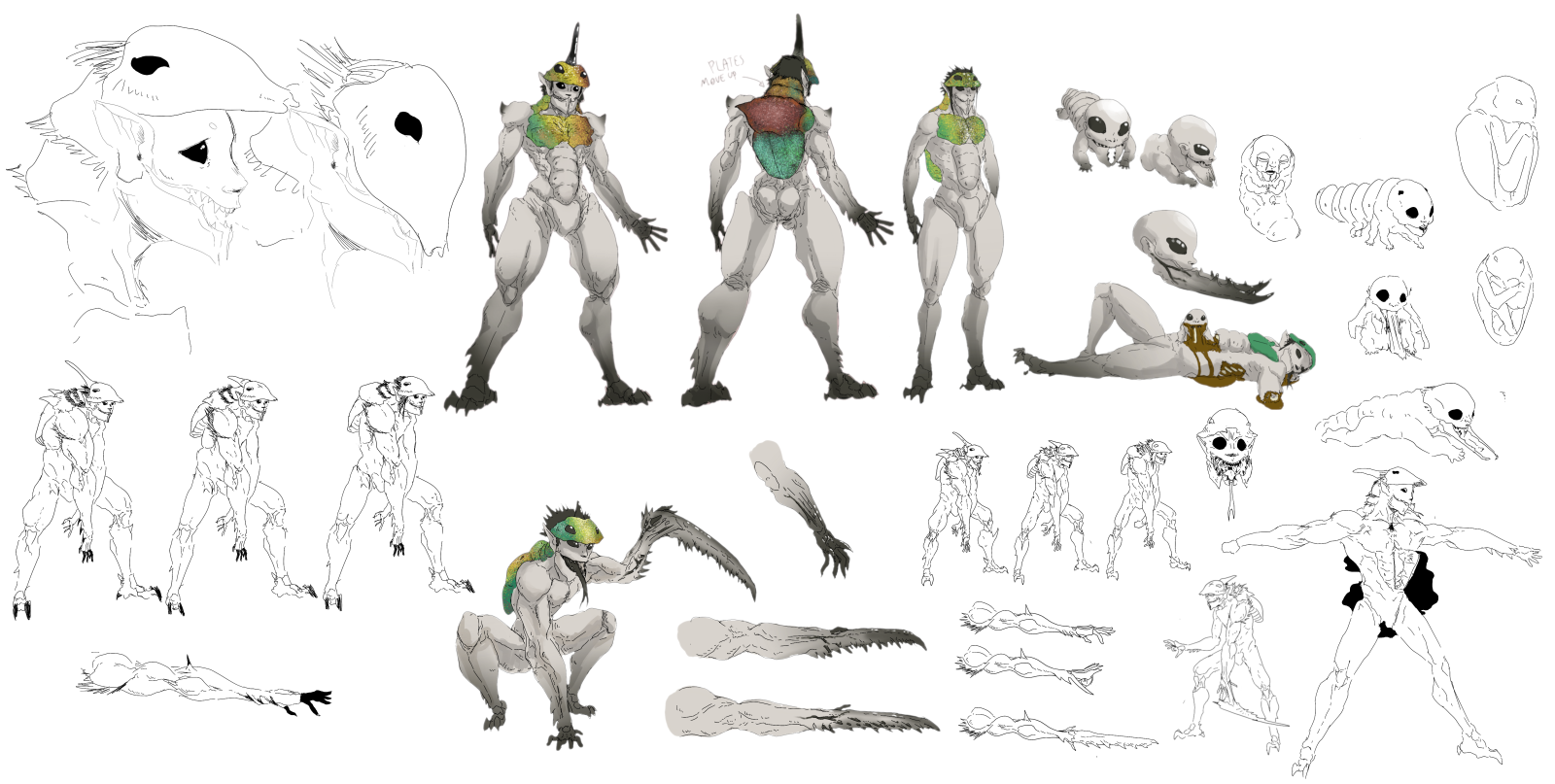 Borne of the Scarab with the Allmother's Luck

As seen in
The Land of Rain and Castles
The Tychenine are the first of the four Races,
created by Er'yn after Yati presented to her a Scarab.
Their Souls are gifted with the Allmother's Luck. 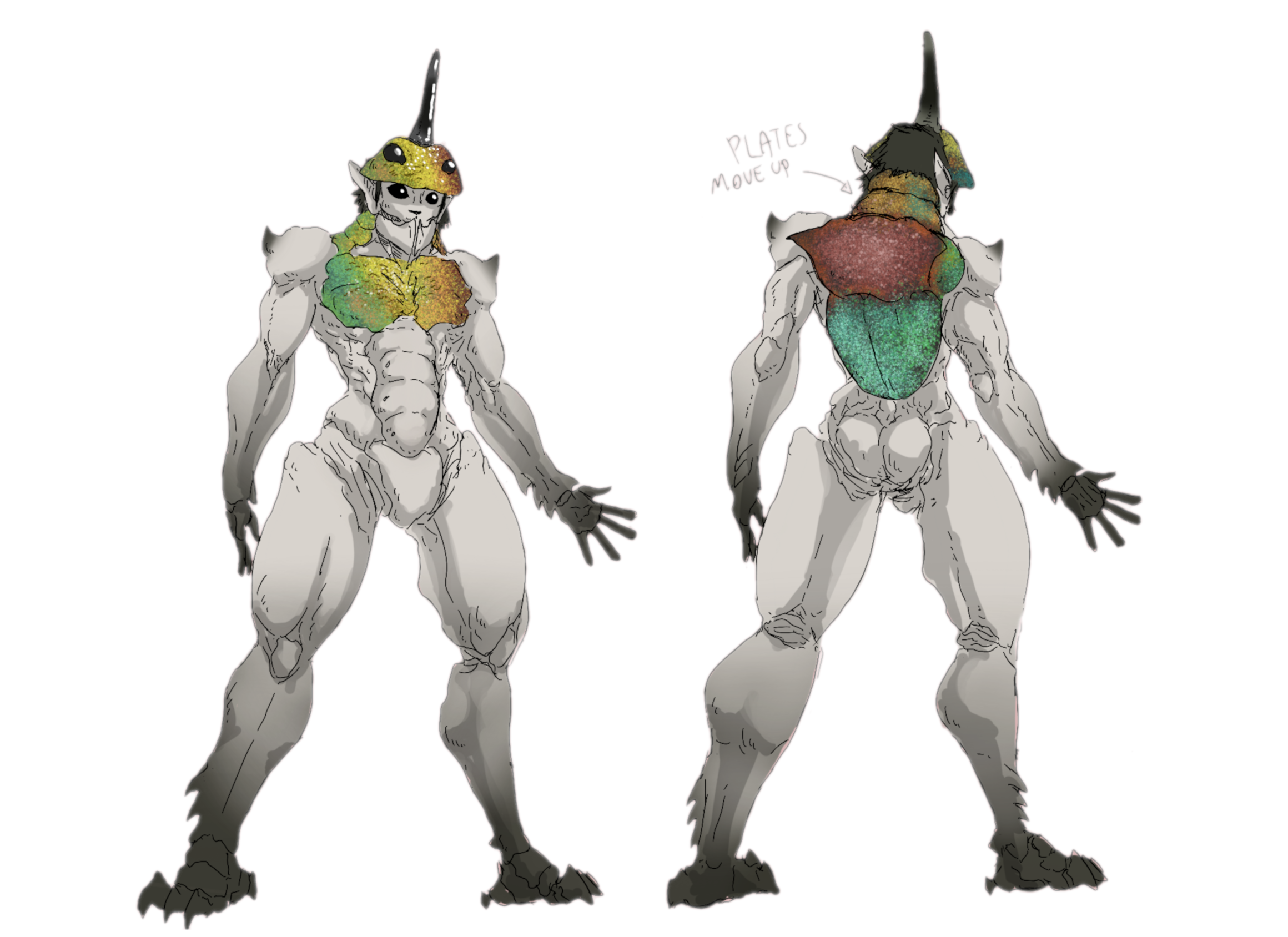 by Paul0tron
Anterior and Posterior presentations of a Major Male Tychenine in Neutral Posing and without Transmutations.


Tychenine are metanocoleopterinoids with highly specialized pseudocoelomate anatomy. The integumen is divided at the metathorax, above which is an exoskeletal shell, and below which is an endoskeletal abdomen. The shell is fundamentally scarabaeoideal, with the various tergites and elytrum in structurally metallic colors. The abdomen incorporates all major organ systems inside of a muscularly dense sensory-motor system possessing opposable anterior forelimb-appendages and capable of biomechanic plantigrade-bipedalism. Furthermore, the neural structures specifically within the head extend underneath to this specialized abdominal body, and the first set of legs has been fused to the pronotum above the head with limited mobility. The remaining mid- and hind legs have minimal epidermal sclerotization like the rest of the abdomen as a result of the aforementioned endoskeletal features, but produce a thicker epicuticle distally at the pentadactyl tarsal pseudoclaw. The hind-legs are oligodactyl, and posses 3 tarsal segments, partially fused for improved upright posture, and anisodactyl tarsal claws. They do possess wings and are capable of unsteady flight.

By influence of Silt magic, Tychenine are capable of transmuting the form and function of their bodies to an almost unlimited degree. Most easily altered is their endoskeletal body components due to their pliability, but even the exoskeletal plating can be changed, given time. The forelimbs are frequently altered to produce spines, raptorial claws, bludgeons, and even edged blade-like extensions. 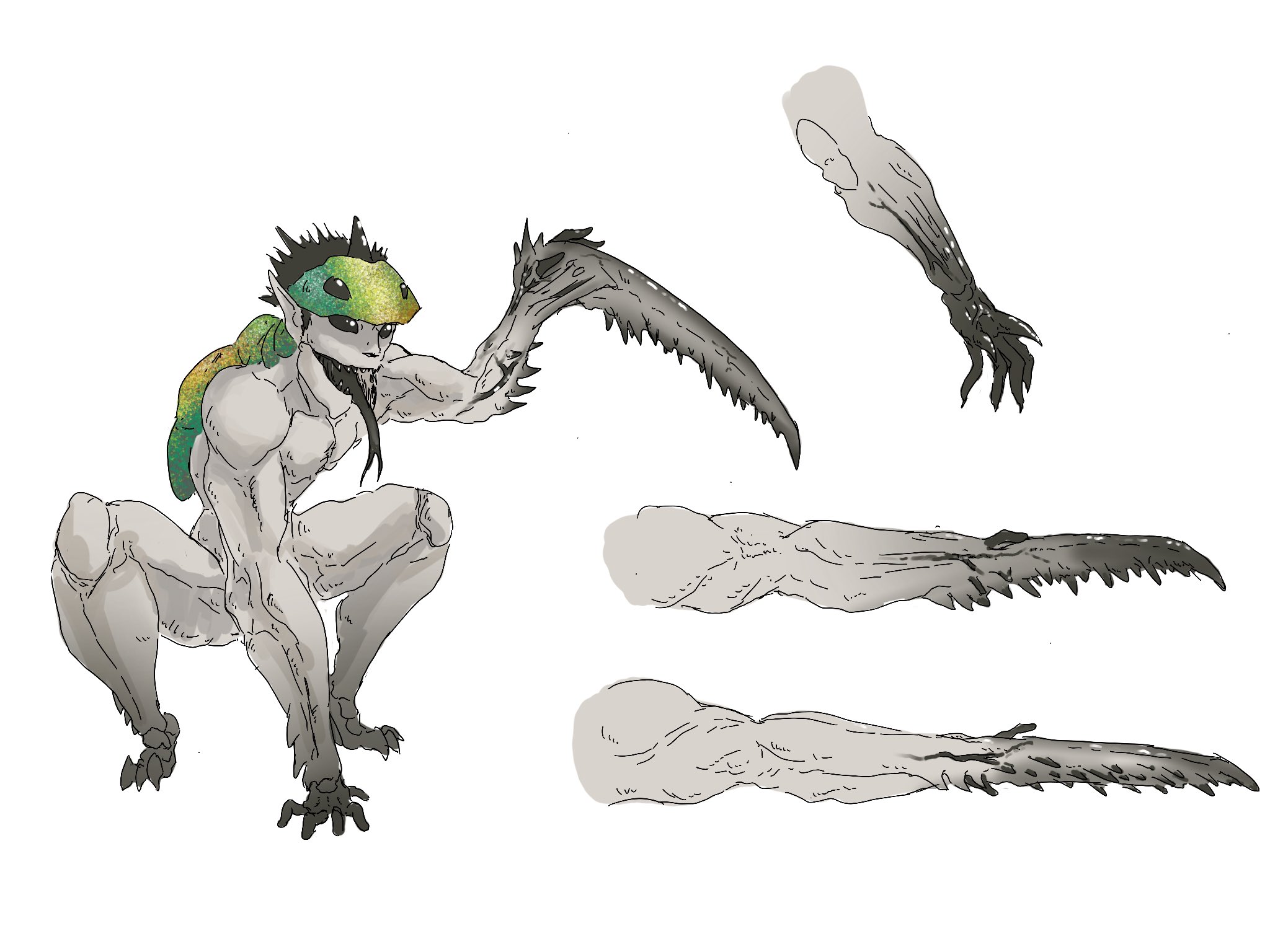 by Paul0tron
Anterior presetnation of Minor Male Tychenine in Crouched Striking Posture and Forelimb Transmuted into Raptorial Blade (plus details).


Additionally, the Tychenine have some particular attunement to higher ranks of magic to impact their circumstances and surroundings to their benefit. One could simply call them lucky: avoiding the footfalls of megafauna, landing unharmed from a haphazard flight, or eating only the non-poisonous organs of a slain isopod.

Following mating, the fertilized eggs within the female's oviducts quickly begin a proto-molting process into the first instar, a grub. As many as 15 eggs may begin this development after fertilization, and due to the limited internal body space within the mother, will immediately begin to cannabalize their siblings. This provides the necessary nutrition to procede through the second and third instars, reducing the number of grubs to a single offspring (though undocumented reporting suggests a pair of grubs could survive. By this point, the body cavity of the mother strains to contain the grub, and with no other siblings to eat, it will begin to cannabalize the mother from the inside. This matriphagy enables the 4th and potentially 5th instar molt, which inevitably ends in rupture and death of the mother. The body is subsequently consumed by the precocious grub, at which point the colony will begin its indoctrination process. 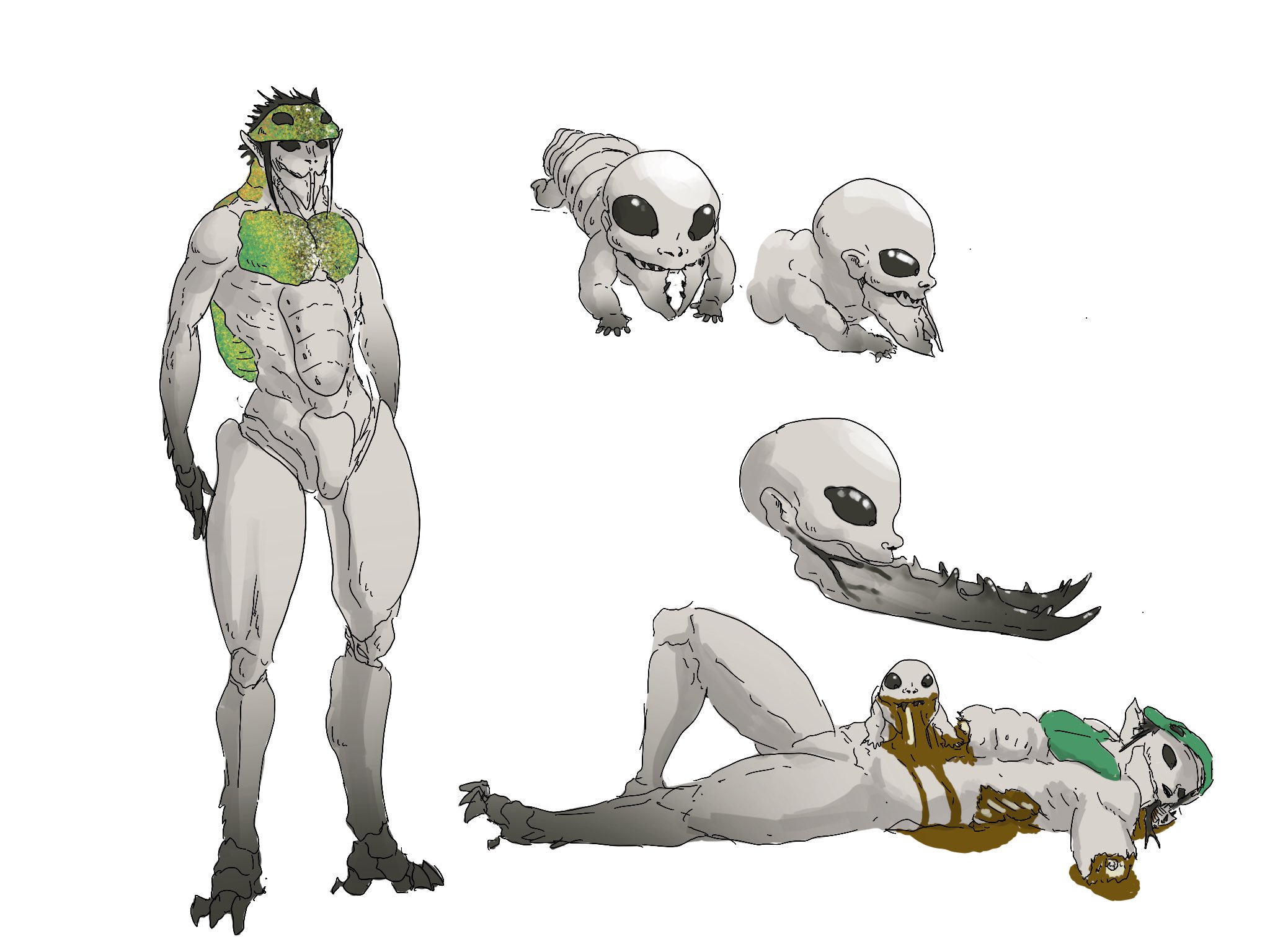 Tychenine in The Land of Rain and Castles

The Race of Pundits