The locals were unable to provide me with any decent amount of information regarding those massive, brilliantly-coloured birds dwelling within the southern rainforest. Determined to learn what i could from them despite the pointed lack of existing data, i embarked on expedition into the wild and untamed Sagewood. It was not very long at all before one of the creatures found me— it fell from the looming canopy, landing on its peculiarly shaped feet before sizing me up with a pair of inscrutable eyes...
I stepped backward reflexively but immediately began scribbling furiously in my notebook, sketch mingling with script in my haste. I could only be frightened and shocked when the creature's beak fell ajar and it began to speak to me, in my native tongue no less.
It asked why i had wandered into its domain, and i answered honestly— "In pursuit of scholarship, and understanding." The creature seemed pleased with this answer, wishing me good luck before bidding me farewell and disappearing again into the thicket overhead...
— from Jaziel's notes

The Wisebird is a species and primitive civilisation of sapient macaws about the size of an adult man, dwelling in the canopy of Kralle's Sagewood. Legendary for their immense wisdom and intellect, they're a mysterious and isolationist kind that interacts with humans only on rare occasion. They are capable of speaking the human tongue.

They stand about the size of a man. Their feet possess four digits in an H-shaped configuration for optimised grasping. Their plumage is greatly various in colour from individual to individual, and is typically very bright and ornate. Their bills are large and round, like a macaw's.

They reproduce by egg, as all birds do. A hen may give birth to a single young approximately once every thirty years. Parenthood is rigorous and young are cared for in every way until about ten years of age.

The Wisebirds' natural distribution is limited to the Sagewood of Kralle. They dwell in the canopy and may construct large nests during mating season. It's unknown what they spend most of their time doing; they seem only to come forward when prompted, and cannot be found when idly sought.

It's thought that they feed on the fruit and seeds of the Sagewood's ancient trees, in addition to honey and smaller organisms from time to time, though they are not active hunters.

Very high, arguably trumping that even of humankind

The Wisebird's capable mind and great lifespan has endowed the species with legendary wisdom and intellect. They are natural philosophers and logicians, and also fairly adept at voice mimicry.

It is thought that the Wisebird lives symbiotically with the thornheart tree of the Sagewood. The Wisebird protects the tree from ants and termites that might seek to turn the tree's base into a colony or shelter, and in exchange the Wisebird eats of the tree's massive and otherwise poisonous fruit without adverse effect.

Wisebirds speak of one another in their native warbling tongue, which is incomprehensible to humans.

Wisebird government is limited, and they speak of it seldom, even when prodded. "Leaders" are uncommon if present at all. Rather, most decisions are reached by consensus. Most Wisebirds live simple, independent lives, without much regard for the wellbeing of the race as a whole as long as their personal and familial safety is ensured.

Though they attempt to see beyond the trappings of physical attraction, it still remains a potent force in the Wisebird mating dynamic. Size matters in this society— males with larger talons, mass, and wingspan are viewed as more attractive, whereas females with longer feathers, particularly in the tail, are thought to be desirable. Feather maintenance is of utmost importance— ruffled, unkempt plumage is to a Wisebird as skin covered in sores and scabs is to humanity.

Wisebird mating is a glorious event, public to all members of a tribe, though humans are rarely granted the privilege of viewing. It's fabled that a pair of mates will engage in a splendid, vigorous aerial dance for a full day, talons intertwined all the time, before settling. Wisebirds mate for life with a few exceptions.

The Wisebirds speak with pristine grammar and courtesy, never allowing their passion to take hold of them. To lose one's temper is a great shame in Wisebird society and is matched with cold scorn.

In the deep of the night, when the rains come down and deafen those surrounding by the dull roar of water upon leaves, the Wisebirds are said to chant nervously of an evil dragon, roosting deep underground to the east...

Wisebirds regard humanity with light amusement and adopt a cryptic, mentorly tone when they speak. They treat men like lower creatures in a way, as an adult might regard a child. Conversely, they regard the Ringbirds with disgust. Refusing to associate themselves with their "fallen cousins," they will act most impolitely to those who relate the two. 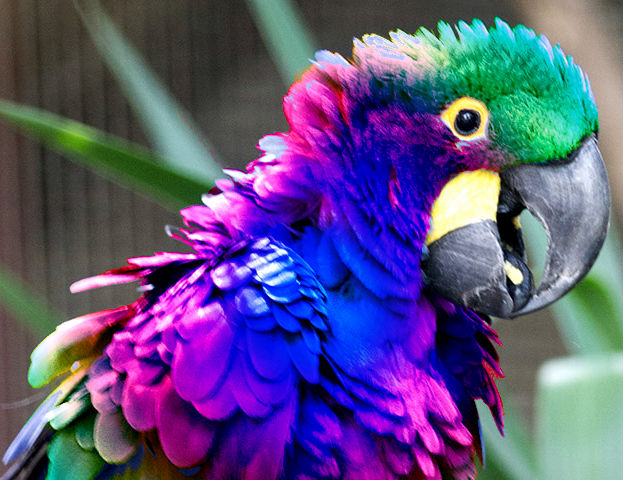 Scientific Name
Ara major sapiens
Origin/Ancestry
Greatbird
Lifespan
Unknown, possibly upward of 700 years
Average Height
1.65m
Body Tint, Colouring and Marking
Plumage colouration is consistently brilliant and seems to be derived from the parents, though colouration does not necessarily mix. For example, the offspring of a scarlet and green Wisebird will not be brown, but either scarlet or green, meanwhile adopting some of the secondary colouration elements of the second parent.