The most ancient people of Kralle are the Walkers, ancestors of the Sifa. The aptly-name race of nomads wanders the desert, practicing an obscure arcane art, the mechanics and purpose of which have been lost to time... Their lifestyle makes it quite difficult for them to breed, and as a result their time remaining as a people is sorely limited. Stories tell of a once-great race, but they are sorrowful shadows now of what they once were...
— from Jaziel's notes

The Walkers are a desert-dwelling people who wander the Desert of Bone, following a strict and ancient code preserved from times of yore. Harshly critical of their sedentary cousins, the Sifa, they refuse to compromise their way of life and as a result are rapidly dying out.

Traditionally, family names were based upon the clan one belonged to— most priesthoods had fairly large caravans, and all members of a clan shared the same surname that was derived from the priest leading it. Remaining Walkers retain the surnames of their ancestors.

Modern Walkers speak an archaic dialect of Sifa, though it’s mutually intelligible with modern Sifa. However, many Walkers— particularly men— are fluent or semi-fluent in Old Sifa as well, or Sifaahi. Old Sifa is considered a holy language among the Walkers, though its vocabulary is sometimes used for emphasis in modern Sifa, which Walkers find vulgar and profane.

The Walkers are the remnant of an ancient order, and the original people of Kralle. They serve the Unspoken Gods that allegedly reside at the centre of the Qahn, and unlike the benevolent god worshipped by the Derish, the Unspoken Gods are wrathful and served in order to lessen their anger. The ancient Walkers, then, consisted of travelling priestly clans that laid offerings in the path of the Qahn, which were swept away by the storm and were believed to sate the appetite of the angry gods at its core.   This practice evolved into what is now known by scholars as arigation, or the channelling or control of the weather. Ancient devices constructed by the old Walkers were able to influence the trajectory of the storm, and they are still maintained by modern Walkers millennia later. Even still, after many of the old ways have eroded away, they roam the desert in order to maintain these ancient devices, keeping the consistent and traditional cycle of the Qahn in order. Why arigation works and whether it truly is divine remains a mystery, but it is the duty of the few remaining Walkers to maintain the ancient practice and religion.

The Walkers are the last practitioners of Arigation, and are typically highly conservative, devout, honour-bound, and proud of their significant heritage. They view the sedentary lifestyle scornfully and view themselves as the last vestiges of the old virtuous ways, though even clans within the race rarely play nicely. They value strict adherence to tradition, as well as spiritual knowledge and arigative ability.

Despite access to superior technology, the Walkers are more or less trapped in the stone age. They roam the desert on a predictable, consistent path, storing their grains and water in primitive pottery that's tied to their @Drake mounts by twine.   Nonetheless, they are the sole remaining masters of the long-forgotten art of arigation.

The traditional Walker hairstyle is a simple bun tied onto the back of the head in a particular knot. It’s adopted by both genders and is common among contemporary Sifa as well, though it’s traditionally Walker.   When a mother becomes pregnant, she immediately begins work on a very large scarf called a "shash." An individual keeps the same shash they receive at birth for their whole lives, though its role changes as their body does. They're swaddled in it until walking age, at which point the shash is wrapped around the body to create a rudimentary outfit consisting entirely of the shash. After adolescence, the shash is then used as a shawl to protect the head and neck from sand.   Both men and women wear a single garment covering the entire body. It's flowing, typically crafted from breathable material, and has separate provisions for each limb. This enables them to both move and ride freely without growing too stuffy.

The Walkers find common usage of the Old Sifa language to be profane. They'll become very offended when they hear its words used in casual conversation, even if it's done innocuously. This is because they view the language as a divine tongue reserved only for the priesthood, whereas the common Sifa view it as a unique vocabulary that's gradually re-entering mainstream. The two viewpoints do not mesh nicely.

The Walkers tell of destructive gods that rage from the centre of the Qahn. These "Unspoken Gods," so called because they cannot be seen or interacted with, can only be prevented from destroying the known world through the activation of ancient Walker pedestals called the serrah. Walker lore acknowledges the Wispfather, but as a separate, non-divine entity.

Women are responsible for nourishment and sustenance. They may gather cactus fruit or hunt small drakes for fresh meat, though more typically they prepare taguella from potted grain. They’re also charged with establishing shelter, which often means pitching and dismantling the tent on a daily basis and picking an ideal spot for nightly camp. They take care of their children insofar as feeding and physical care, though education is typically relegated to the father.   Men are the spiritual leaders of the clan. The priesthood is male-exclusive, and Walker men in the modern world are responsible for the arigative duties during travel. They are also the supreme navigators and resource managers. Walker society is typically patriarchial.

In the ancient past, courtship outside of clans was discouraged. However, modern Walkers are rarely able to marry within their clan, as modern "clans" are typically small familial groups rarely exceeding a dozen in number. This is one reason for the rapid downward spiral in their number.   It's increasingly common for Walkers to marry off into sedentary communities, a practice that was once denounced as heretical. This is often done in desperation with little to no courtship, as Walkers are typically quite wealthy by Sifa standards and are therefore highly shought after.   Due to their nomadic and reclusive lifestyles, Walker clans rarely meet, and when they do, it is not for long enough for a legitimate romantic connection to be established. When meetings do occur, eligible partnerships are often officiated immediately. The newlywed couple may either form a new caravan or pick one to remain with— usually the bride’s. 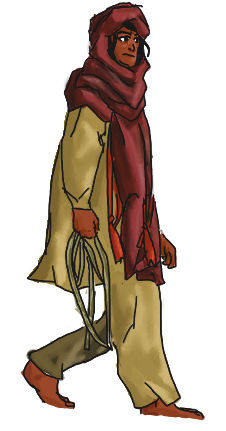