The saberbill, also known as the lancebill, is a species of brave bird of the family Cathartidae. Found in virtually all of Kralle's coastal regions (but particularly near the equator), the saberbill is the largest flying bird in Kralle, though its wingspan is exceeded by some brave seabirds. It feeds primarily on large fish, especially tuna, though it also eats carrion when it can find it.

The saberbill is the most massive flying bird in Kralle. Its total length can reach upwards of fifteen feet, and its height approaches eleven feet. Its wingspan is truly massive, approximately fifty feet in total, and it averages between four and five hundred pounds in weight. Its plumage is entirely black, save for its greyish flight feathers and a collar of white around its neck. The skin above the collar, including about half the neck and the head, is deep red and featherless. Unlike most other birds of prey, the talons of the saberbill are fairly undeveloped, and its feet are almost entirely webbed. Its webbed feet are an adaptation for its marine lifestyle. The feathers of the saberbill are partially wettable. Its eyes are a cool white, and males possess a small comb on the crown of the head. The beak of the saberbill is one of the largest of all birds, sometimes exceeding five feet in length, though it's relatively narrow and has a slightly curved shape that gives the species its name.

Saberbill courting is relatively unspectacular. When mating season approaches in the spring, the neck skin of the male flushes to a bright golden color. He then approaches the desired female and dances with his wings extended, occasionally cawing. Saberbills mate for life. They prefer to nest in seaside crags, or seacaves if they're available, and lay only a single egg at a time. Incubation takes about five months. Young take approximately a year to mature, and until they do, they are covered in fluffy grey down that precludes flight. Saberbills may produce up to a dozen young in their lifetime, though the average is closer to half that.

Young are born with fluffy grey down and cannot fly until they reach about a year in age. As a result, they are fully reliant on their parents until they gain the ability to fly. Saberbills often stay with their parents until new offspring is produced, at which point they leave the nest and begin their adult lives. Saberbills are mostly solitary and interact with others of their own kind almost exclusively during the spring, for mating.

Saberbills inhabit coastal regions, and most of their diet is based around fishing, which they perform with their long, nominal beaks. When they're on shore, they can be found preying on mollusks and crustaceans. However, they are often at sea instead, and are skilled fishers. Despite their great mass, they're capable of remaining afloat with their exceptionally large webbed feet, and are somewhat capable divers though they prefer to remain above the surface. Saberbills also have relatively powerful gut flora, and often follow other brave birds in order to scavenge their killings. The immense size of the saberbill makes it relatively safe from predation, though it occasionally falls into circumstantial dispute with Sea drakes while at sea, and may be overpowered in these fights.

Despite their great size, saberbills are not very favorable food products. However, their fish-based diet makes them fairly reliable indicators for good fishing areas, so experienced fisherman often follow saberbills to their fishing spots for optimal yields.

The saberbill has a superior sense of smell, likely residual from its scavenger ancestors. Their vision is average, but not particularly adapted for underwater sight. 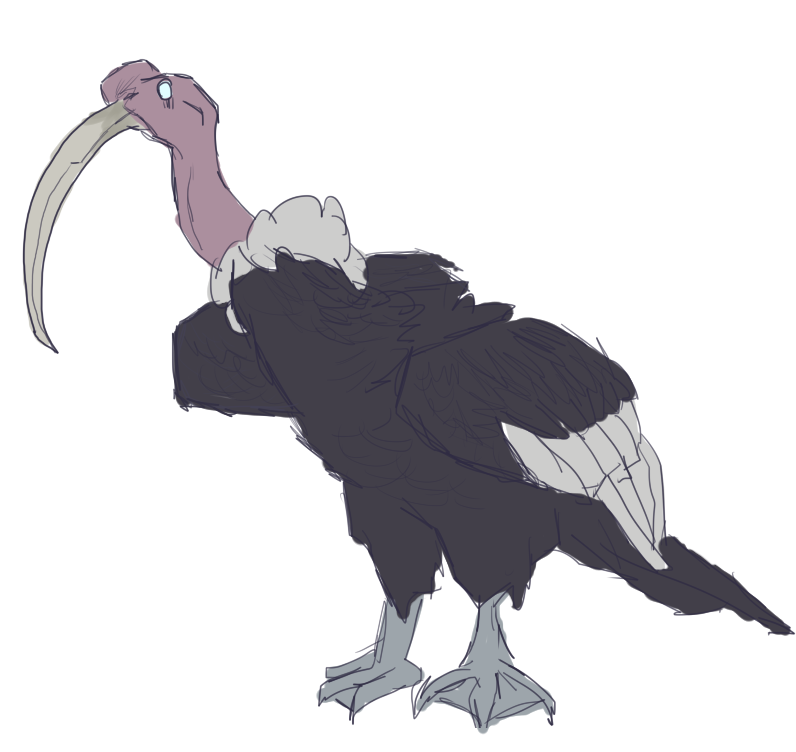