The great rook, alternately known as the giant raven, is a corvid species of brave bird endemic to the Ring . They are highly intelligent scavengers, and have even been reported practicing limited mimicry, though generally they are relatively asocial.

The great rook is about five feet at the shoulder, and eight feet in length. It is significantly stockier than its smaller relatives, with very thick legs and wide shoulders— its wingspan is also immense, over fifteen feet. Its beak is quite large, even proportionally, and its pointed end is used for crushing prey. Its large talons are used for gripping and slashing prey, and for that matter its grip strength is quite strong— it's capable of carrying at least its body weight into flight, if not more.

Great rooks begin courting fairly young, but finding their true match can take up to ten years. Aerial maneuvers are a part of the courting process as with all other bird species, but great rooks are unique in that their courting involves an intellectual aspect. Tool construction is used to woo would-be mates, and they're often observed building structures that might be described as art in order to prove their wit. Once mated, great rooks typically stay with their partners for life... though, interestingly and somewhat amusingly, they have been observed to "cheat" on their mates on time to time, particularly when one is out gathering food. Great rooks nest in the peaks of the Ring, preferring to nest on the ground. Eggs are laid in clutches of two to three, and take approximately three years to incubate.

It takes great rook hatchlings approximately two months to fledge, though they stay under the guidance of their parents for approximately two years before leaving the nest to begin courtship. During this time, the parents impart their knowledge through training— and, some researchers speculate, even verbally. They spend their time with the parents improving their hunting and fighting tactics, as well as perfecting their flight. After this, they go on to court, before settling down and raising families of their own. Great rooks may breed upwards of ten times before exceeding breeding age; however, they rarely do. Like all brave birds, great rooks have extremely long lifespans. As they grow in age, they become increasingly large and heavy, and may eventually lose the ability to fly. When this occurs, it's not uncommon for the rook to die of starvation as its hunting tactics are rendered ineffective, although they may survive indefinitely if their vassalage is large enough to maintain their ever-growing hunger without any hunting of their own.

The great rook inhabits the majority of the Ring. It is a ground-dweller at home, though it is a skilled flier otherwise and often fly into the Ring's bowl for hunting. Because they live on the ground, they are often "officially" treated as vassals of most other birds who perch in the trees, though their large size and formidable combat ability allows them to lead relatively solitary lives despite this.

As massive and active as they are, great rooks have appropriately great dietary needs. Most of their diet is fulfilled by preying upon Sandfowl, though they're also known to eat apples and other fruits to hold them over. They prefer carrion where they can find it, and are not above cannibalism in a pinch.

Great rooks are fairly asocial, though they do have extremely loose family clans that interact occasionally. Though they fit into the feudal brave bird hierarchy like all other brave birds, their position near the bottom combined with their strength makes them more or less immune to the regular pressures of vassalship. Romantic relationships between great rooks are very human-like in nature, and involve dating and even adultery.

Because of their high intelligence, great rooks have evaded traditional domestication. However, they can and do build relationships with humans in a way few other birds do, and are useful for hunting and scouting, although they are subpar for riding.

Great rook are for the most part limited to the Ring, though they are sometimes found in northern Frith or southern Sefia.

Great rooks are highly intelligent. They've been shown to exhibit theory of mind, are thought to have their own basic language, and have exhibited tool use and even art production in the wild.

Being a diurnal species, the great rook has relatively poor night vision, though during the day its depth perception is quite sharp. Its hearing is slightly above average, but more importantly it's highly nuanced— great rooks are the only birds aside from parrots that have been noted to understand and comprehend human speech to the point of replicating it accurately. 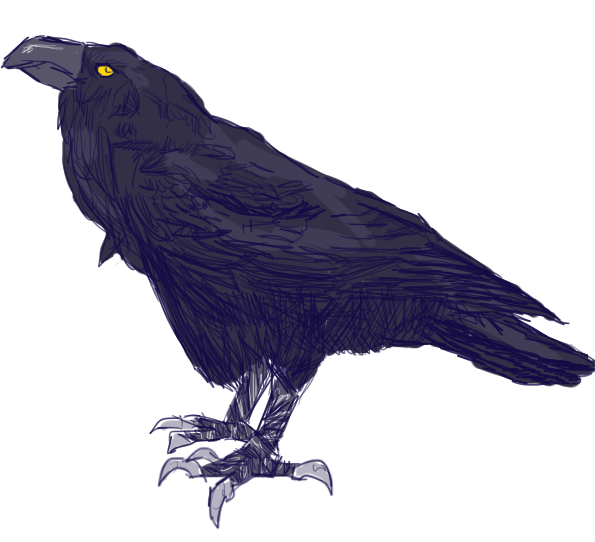 Scientific Name
Corvus giganteus
Origin/Ancestry
Corvid
Lifespan
Unknown
Average Height
155cm
Average Length
260cm
Body Tint, Colouring and Marking
Like most corvids, the great rook is black in color, though they are iridescent and appear bluish in the sunlight.

Cover image: One of my favorite sunrises from last fall. North Cascades, WA by thrillhousevanhouten