The expansive desert stretching to the north of the human mountain villages of Kralle, called the White Steppe by the locals, is home to as peculiar a strain of creature as i have ever seen. Covered in brownish feathers and equipped with razor teeth and claws, the drakes are a various family of flightless avian predators, adapted to the harsh life of the white sands and the fast-paced life of a ferocious hunter in every way... I have seldom seen so terrifying a band of monsters in all my days. Yet the denizens of this desert live among them and train them as one might a loyal dog.
— from Jaziel's notes

Drake is the common name for a family of avian predators native to the White Steppe. The group is extremely various, with dozens if not hundreds of subspecies, but they are all fairly similar in morphology if not size.

With small, clawed wings and large and muscular legs equipped with wicked talons and built for running, the drakes more closely resemble their ancient draconic ancestors than they do the birds to the south. Their heads are large and fitted with pointed teeth for tearing, and their bodies are stocky, robust, and tipped with long and slender tails. Lithe and thin, they're slender predators that rarely exceed two metres in height, averaging closer to one. They're covered in short, fluffy down, usually of dull colouration. They resemble the dromaeosaurids of Earth.

The drakes are a large and various family of birds closely resembling dinosaurs. Commonalities are their sharp claws, one of which per foot is typically elevated; their lean, speed-oriented frames; and their predatory, pack-based lifestyles. They vary greatly in shape and dimension, from the diminutive size of a small hen all the way up to hulking, twelve-foot behemoths, though such extremes are rare and the majority of organisms sit at around the average of one metre.

Unlike other birds, the drakes are viviparous, probably because eggs would be at risk due to the harsh sandstorms and geography of the White Steppe. They can give birth to a clutch of about three once every ten years or so.

Most drakes are native to the White Steppe, meaning they are adapted to the rough desert life. They're warmblooded to overcome the freezing nights, and their hides are tough to resist the furious sandstorms. Their feet are highly flexible, enabling to sprint across the fluid sands with ease.

Most of the drakes are carnivorous, and hunt in packs. They snack on smaller organisms, including other drakes, but may occasionally take down larger prey such as sandhens, which can sustain an entire pack for months.

Indigenous and all but limited to the White Steppe

Drakes have remarkable hearing and smell, which allows them to navigate effectively even despite the raging sandstorms characteristic of their habitats. It's said that they can smell fresh blood from a mile away. Their sight, however, is somewhat poor, though they do possess some limited night vision. 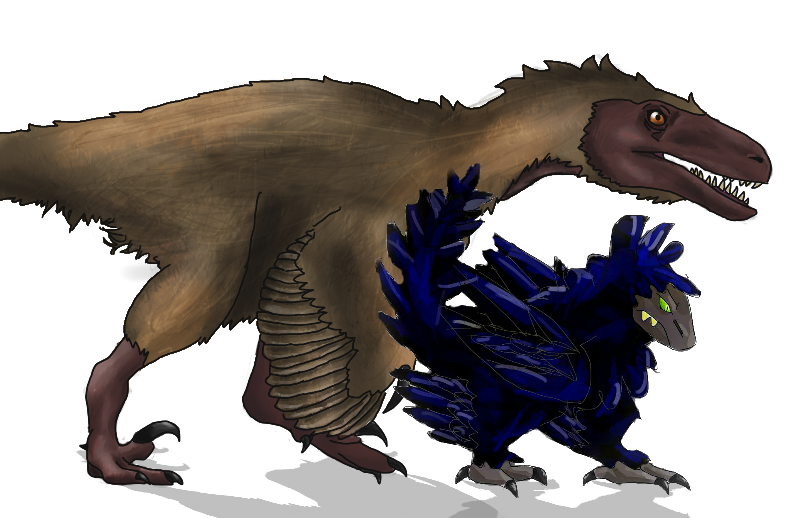 Genetic Descendants
Scientific Name
Ornithosaurus (family)
Lifespan
45 years
Average Physique
Thin, lithe, lean, covered in dully-coloured down. Claws are sharp and thick with a single elevated claw. Some species may sport a collapsible sail on their back.

Very beautiful work. I love the idea that the locals called them all "Drake"