"Today's lecture is about the unluckiest arcadian species on Prius.
The sad tale of the Dragos.
Quite ironic considering these giants having it all. Power, true flight, unparallel abilities; the perfect defence and offensive abilities merged in one.
Some compare these beautiful ladies of the sky even to being the true reincarnation of the mythical legends of the past: Dragons!
Heh...
You might wonder, why nobody here in this university has ever seen one of these Dragos. And that is good because that means that you all are upstanding citizens.
Yeah, it has been suspected that Dragos are quite popular in the so-called Underground.
Due to their exclusive rarity they are considered to be prestigious symbols of power.
...
Why I am aware of that? I am monitoring the politics in Squa'osa and have noticed a slip-up in a paper from governor Rearrock, who is suspected to have ties to the mysterious Underground.
A package from Etherium, containing 'livestock'.
Protected like one would protect something invaluable.
Also transported in a blastproof container.
Not to mention, that this lizard is an eccentric collector...his nickname...'Zookeeper'."
...
Mauze Tung 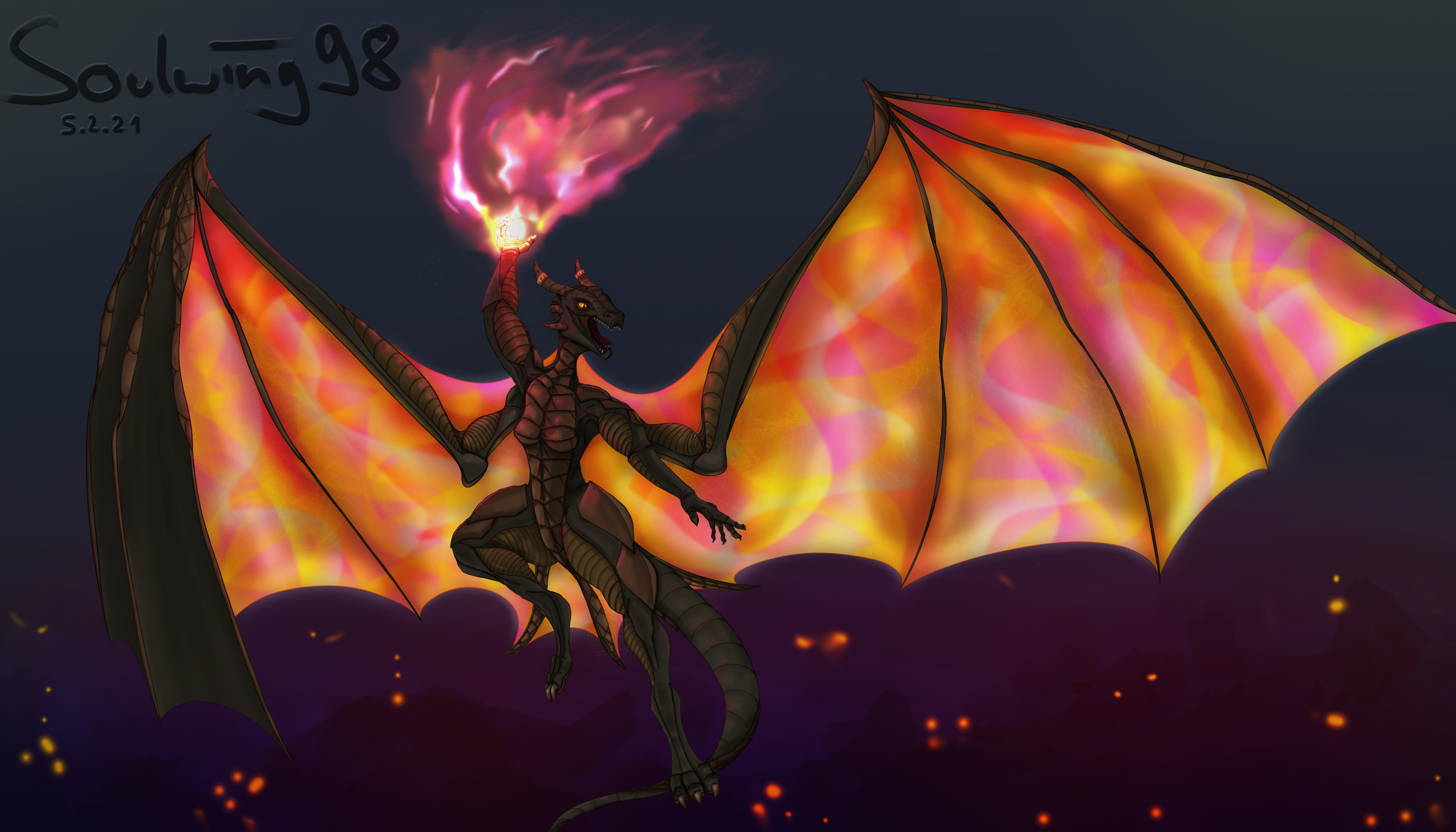 Arasa / #17 by Soulwing98
Dragos are quite similar in anatomy to the Lizardkins, but several sizes larger.
They are bipedal cold-blooded humanoids with scales and plates decorating their sturdy leathery skin.
Dragos are beings capable of true flight and therefore possess wings wearing proudly a fiery pattern of red, yellow, green and violet giving them their nickname "Fiery Aurora".
That name originates from the ability of these wings to emit a steel-melting plasma trail when flying top-speed.
Looking closer this majestic creature actually possesses four arms and legs and two tails, but the additional legs and tail regressed to support the wing-turned arms creating a bendable kite-like construct allowing superior mobility and quick aerial manoeuvres.

As it is true with most of their abilities, their sensory capabilities are through the roof as well. Their senses are so sharp, that they can still focus their targets sharply after breaking the sound barrier flying at Mach 2 through the sky. Additionally, Dragos possess advanced detection powers regarding the arcane to keep innocent bystanders safe and sound.

"How I managed to capture slave #17?
No, the legends are true, they are ridiculously fast and powerful and anticipated the attacks of my reavers over multiple months.
But even this outstanding showpiece was no match for my superior intellect.
What you cant catch you have to outwit.
And for some reason had #17 something against us massacring a nearby village for fun and giggles and gave herself up in exchange for us disarming the hidden bombs. Well, our massive foolish savior will now get sold to the highest bidder into a life of servitude.
Was it worth it, you gorgeous fool?
Newsflash! It was, but for me.
You will bring in a true fortune.
Ettora, automaton headslaver

The name of a Drago is the name of their birthing place altered slightly for convenience.
So had for example the underwater Volcano Arasatolla given birth to the Arcadian
Drago Arasa 50 years ago.

Due to their high intelligence and unparallel learning abilities Dragos can learn new languages in a flash...if their teacher is able to keep up.

Relations of Dragos with other Species are overwhelmingly negative.
Getting treated like nothing more than trophies and slaves for labour, transportation and sometimes just as a display of influence, it is quite obvious why they dislike every sapient being on Prius. Still...they would never harm an innocent being as it would break a code long forgotten but still affecting them in the back of their head.
To protect themselves from the vengeful wrath of a Drago, their owners never approach them completely alone. Having an innocent being in the same room generally incapacitates the Arcadian from fighting back.


"You cowardly spineless excuse of a cold-blooded dimwit.
Having not even the balls to oppose your ownership face to face alone.
Always dragging around this poor innocent Kobold with you to shield yourself from my wrath.
I don't care for the explosives nor the shackles; I would gladly give my life to end yours...Master Rearrock.
You will never break my spirit!"
Arasa / #17

Origin/Ancestry
Manifestation of massive amounts of wild arcane fire magic.
Lifespan
150 - 300 years
Average Height
7 - 9 meter
Average Weight
900 - 1200 kg
Average Length
Wingspan: 18 - 26 meter
Body Tint, Colouring and Marking
The main body of a Drago is usually coloured in a mixture of earthy hues reaching from deep brown to a clayish grey.
With the help of these unimpressive colours, the colourful shining wing-leather has a truly mesmerizing and dazzling effect on its surroundings.

"Meeting that hunted Drago in the wilderness of Stiria had a bigger effect on me than I am ready to admit.
I was sketching continuously for days trying to harness every ever so tiny memory I captured of her printing it into my diary.
A tragic beauty.
I hope I will be one day able to talk with her from face to face."
Diary entry of Dross Hegraven

No matter what, but enormous amounts of it. Preferable meat, but beggars can't be choosers.
Their flaming maw allows them to consume even raw matter by simply cooking it on the way down their throat.

Dragos need massive amounts of dense fire arcane to allow the veil to kickstart their birth.
Only the most massive volcano eruptions are able to produce enough Arcana, which limits the overall Exemplar counts in the double digits.
While it is impossible to count the exact number, it is suspected based on the rarity of eruptions of eligible volcanos, that only twenty exemplars are able to be concurrently alive.

Essentially being the representatives of a Volcano, born entirely through its eruption's might, their intrinsic abilities couldn't be more potent.
Breathing fire, casting enormous balls of plasma; Erupting the sky itself letting it rain fire and destruction hotter than anything imaginable. One of these peaceful behemoths could obliterate the army of Etherium in less than an hour if they would be able to act unhinged and without restrictions.

"Take the most powerful pyromancer you know and multiply their abilities by infinity. Thats how powerful a Drago 'could' be, if not for their brain.
I am not sure, but as it seems to be the case with most Arcadians, there seems to be a purpose missing; a part of their self got lost in time rendering their existence incomplete.
Mauze Tung

"Why are you even asking me that?
I have no clue?
But even if we assume perfect conditions I highly doubt that there are any mating partners around who even remotely match in their size.
Bother someone else with your fantasies, I have lectures to prepare.
Mauze Tung

That last quote is the best. :x