“If you ever happen to encounter an arachnid, dear students, are there two possible outcomes depending on their way of life.
You can easily spot the difference between a social spider girl and a feral hunter … however I wouldn’t advise risking even that.
The main difference between feral and social is how they treat their eighth eye set in the centre of their chest. If that eye is covered by a makeshift bra of spider silk, they at least don‘t want to devour you on sight.
You have to know, that the gaze of the gem-like eye turns every organic matter into a poisonous sludge so that they can feast on it.
In conclusion: Pray to the counsel, the Tribunal or whoever you believe in, that the skittering visitor will be a friendly one because one false glimpse and you will be at their mercy feeling your insides getting intoxicated.“

Arcadian Arachnids can be easily distinguished from other sapient beings from their silhouette alone. While covered fully in a chitinous outer shell, their upper body appears nearly humanoid their lower body is vastly different. With a thorax with six legs and two grabbing arms, their total number of limbs would be ten when adding the pair of five-fingered arms. (…)

Body: Covered fully and nearly entirely in smooth and hard yet malleable chitin, only a few parts of an Arachid‘s body do feel squishy. Their throat and lower belly are made of a rubbery highly sensitive substance and therefore their weak points. It is a symbol of trust if they willingly let one touch these spots. A similar deal is the abdomen of these insect people. Being slightly tougher than their rubbery parts, but not as tough as their chitin armour, arachnids only show their colourful backside to those they trust (or those they desire to weave into a silk package)

(…) As it is usual for members of the arachnid family, Arcadian Arachnids also possess eight eyes. But only seven of those reside on their head. The eighth is a special case. A hard gem-like oversized eye resides in the centre of the upper chests of every arachnid; the only eye of them with special powers. The ever-present gaze of the true eye is slightly toxic and becomes a dangerous weapon if they decide to look closer. (…)

Eyes: Arachnids have seven pupil-less button eyes placed symmetrically on their head in a for each arachnid unique constellation. The eighth eye however can not be found on the head, but rather in between two slightly elevated chitinous plates on their chest. A giant static eye, that is not connected to the sensory system and has therefore no nerves being a simple eye-like gem-shaped accessory with roughly the same density. That ‚eye‘ however serves a different purpose; it is part of the arachnids digestive system, the very first instance. The eye that never closes is linked directly to the veil, continuously radiating an acidic gaze poisoning anybody foolishly enough to get seen by the arcane glance. It doesn’t matter if the target even notices the view, they will soon notice feeling them turning slowly to toxic sludge from the inside out.

(…) And that is why you should always ask soundly when you hear them skittering around if they are covering themselves up. Because their own silk is strong enough to keep the radiating gaze at bay rendering them able to interact normally with us. Their true eye is beautiful, I saw it in pictures, but it is a deadly pleasure seeing it in person. (…)

Hair: Arachnids are always bald, having no hair but tiny sensory hairs on their skull. Non-feral arachnids however developed a certain self consciousness about their baldness creating elaborate wigs out of their spider silk.

„It hugely depends of a simple question if you should advance one of these arcadians. Do they live under people? If yes, then they are harmless. If not, pray they have their 8th eye covered or at least care enough to grant you their antivenom. … Just try to stay away from wild arachnids and you will live longer.“
Survivalist

Feral Arachnids: Born out of toxic wastes, sewers, infested forests or else, most arachnids start their life as feral survivors with only limited social capabilities. They do prefer to hunt in small packs but stay hidden from those able to communicate. Humanoids are usually not on their menu. If one ever happens to fall prey to their gaze, the pack debates democratically if they should save the poor person‘s life or let the toxins do their job. Most social arachnids started that way. Accidentally poisoned an unsuspecting bystander, helping them and getting curious about them. Most leave the healed victim alone, but few try to communicate with the stranger offering undergoing a link to allow the arachnid to become whole. Social Arachnids: It highly depends on the influence of their linked partner, but most socially integrated arachnids try their best to appear as normal and friendly as possible to their surroundings. They suffer greatly from the many looks of disgust seeing an oversized bug walking amongst them, but if someone decides to open themselves up to these ladies, they will be rewarded with a new friend trying her best to be worth the given trust. 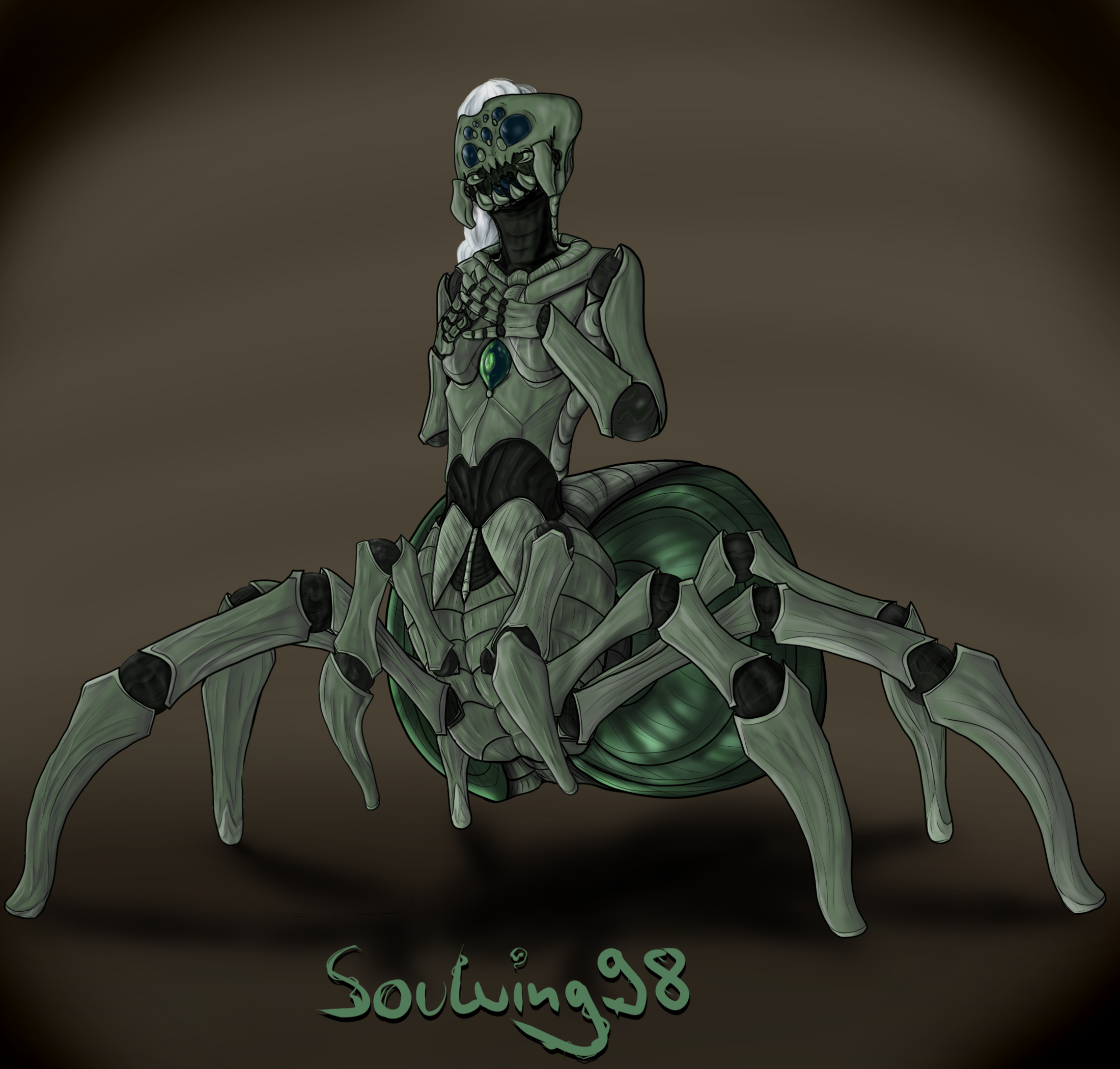 Natural catastrophes of toxic natures? Old or still active sewers? A chemical waste dump? Or even only an infested deep forest. All these locations could be the birthing pod for the scattering envoy of the gate of devastation. Binding these radioactive or toxic fumes they condense into an arcane being of pure poison, with an acidic tongue and a radioactive personality. The Veil cleans up the mess by turning it into humanoid-like spiders with an undying hunger for toxins. The young arachnid grows up rapidly utilizing the abundance of energy to turn it into growth hormones speeding up childhood and the teenage years to mere days. When the arachnid is matured, the place of their birth got turned serene, to be habitable for others once more.

„I appreciate that you cooked me this tasty smelling meal, friend, but I wonder. Is it ignorance or malicious intend trying to present something the opposite cant eat under any means? Healthy food is poison for me.“
Szeda

Arachnids have a rather unique diet, consisting in its entirety of poisons, venoms, acids and toxins. To make their prey or meal digestible, they possess unique means of turning any organic matter into toxins; their eighth eye. But even they are not fully acidproof; they need to eat poisons, but it shouldn’t be poisonous anymore in their digestive tract. To render poisons harmless, the saliva, as well as secrets within their fangs, produce a strong neutralizer preventing mishaps.   Normal food on the other hand is extremely harmful to an arachnid. Lacking the enzymes to translate the food into energy or even dissolve it, this non-dissolvable matter will clog up the spider's digestive tract, rendering a necessary medical intervention to prevent bad consequences.

No matter if they have undergone a link or not, their matters of speaking are fairly limited. To articulate correctly they have to speak slow and precise or they lose themself in an intelligible scratching voice cursing helplessly being angry at themselves.

As is the case with all Arcadian species, Arachnids, being a female exclusive species, cannot reproduce by normal means. Under the twisted influence of the Veil in the Squa'osa Archipelago as well as Sepernius, they are however able to mate through arcane support with other humanoids. Offspring will remain to be Arachnids, but similar to the influence of humanoids mating with Arcadian Carbunclos, the species will alter greatly the basic composition of the offspring. Based on the mate the offspring can be a child of any of the nine gates of the Veil.
Arcadian Automaton
Species
Arcadian Banshee
All Content, including Artwork and Music, © ℗ 2019-2021 Copyright Soulwing98, unless stated otherwise. All Rights Reserved.
Cover image: by Vertixico 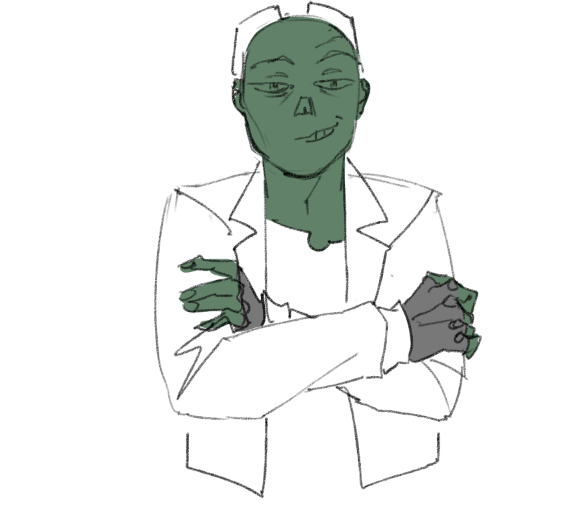