Snakke Hith is a wood elf and one of the Representatives of the Communes, on behalf of the commune Yhaoltum. She is an accomplished sailor and captain and a devout woman. Politically speaking, Snakke is a loyalist -- she believes in the integrity of the Kingdom of Laeryll -- who advocates for reconquering Silimanis, where she was born.

Snakke is a healthy wood elf, with a strong constitution. She is fit and clearly keeps herself active.

Snakke has broad shoulders and muscular arms. She has a short build.

Snakke is always a bit agitated -- she hardly ever sits still and during conversation can be seen scanning the area as if she's always seeking situational awareness (which she is). She has the habit of nodding quickly if she understand something.

Snakke was born in Nossed, Silimanis. At age 96, after the Invasion of Silimanis, she and her father Kradok Hith moved to Qosid, where they joined the lakeside commune Oltumur. Her father, well-known for his sharp mind and tactical insight, worked his way up the voluntary guard there. Snakke, who had grown up on the Central Sea and loved sailing, followed in his footsteps and joined the maritime guard.   Meanwhile, a new commune had emerged just east of Oltumur. Founded by naval guards from Nossed, this new commune Yhaoltum developed the Qosidian Fleet and started building and buying ships. Snakke enjoyed the company of the Fleet members and could impress them with her sailing proficiency. In due time, the Fleet became the de facto security force of Lake Olt and Snakke transitioned into joining them. Renowned for her capacity to commandeer any ship, she became captain and in 895 LC she was voted to become the Representative of Yhaoltum, too.

Snakke loves the water and nature. For her, being on the water is enjoying the beauty of Qosid. In her heart, she does not want the world to change and she does her best to maintain the existing way of life. The fact that Oltumur, where she grew up, is changing rapidly is concerning to her. She accepted the role of Representative partly to get a better idea of wood elf politics and to be able to foresee the changes that are coming.

Like all wood elves, Snakke can appreciate good food and drinks. However, for her such things should be in moderation and she dislikes the bacchanals that are all too common among the Qosidian Fleet. The one exception she makes is chocolate, but in Qosid this is hardly ever available.   Besides this, Snakke has a weakness for human music, most notably the simmies from Silimanis.

Snakke believes in justice and will always honor an agreement. She is loyal and puts the collective interests above her own.

Often a bit too trusting, Snakke can be duped by fast talkers and charlatans.

Snakke worships the gods of the Pantheon of Twelve. She has been influenced greatly by the tenets of Ush and subscribes to the idea that the Northern Church of Ush should harmonize the principles of justice. 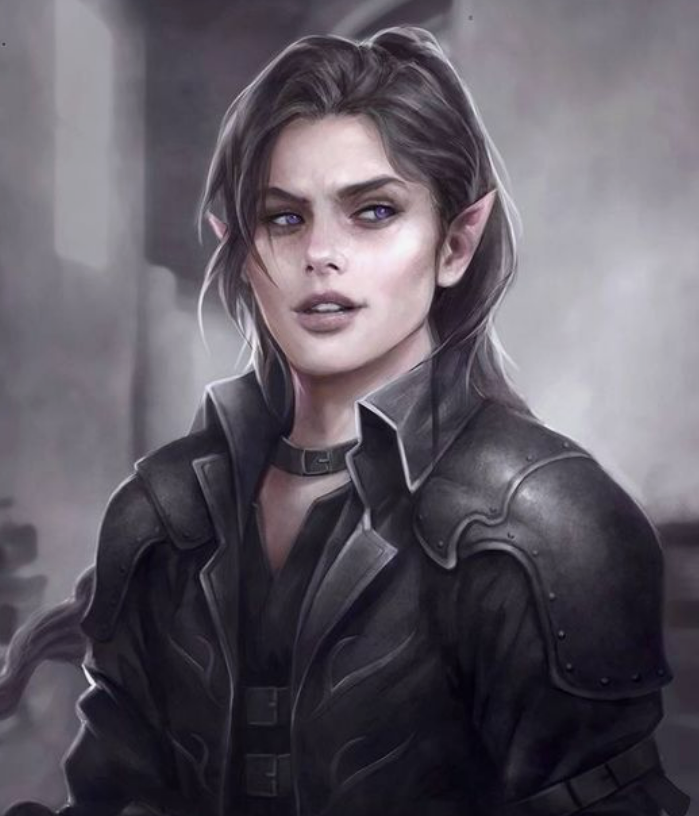