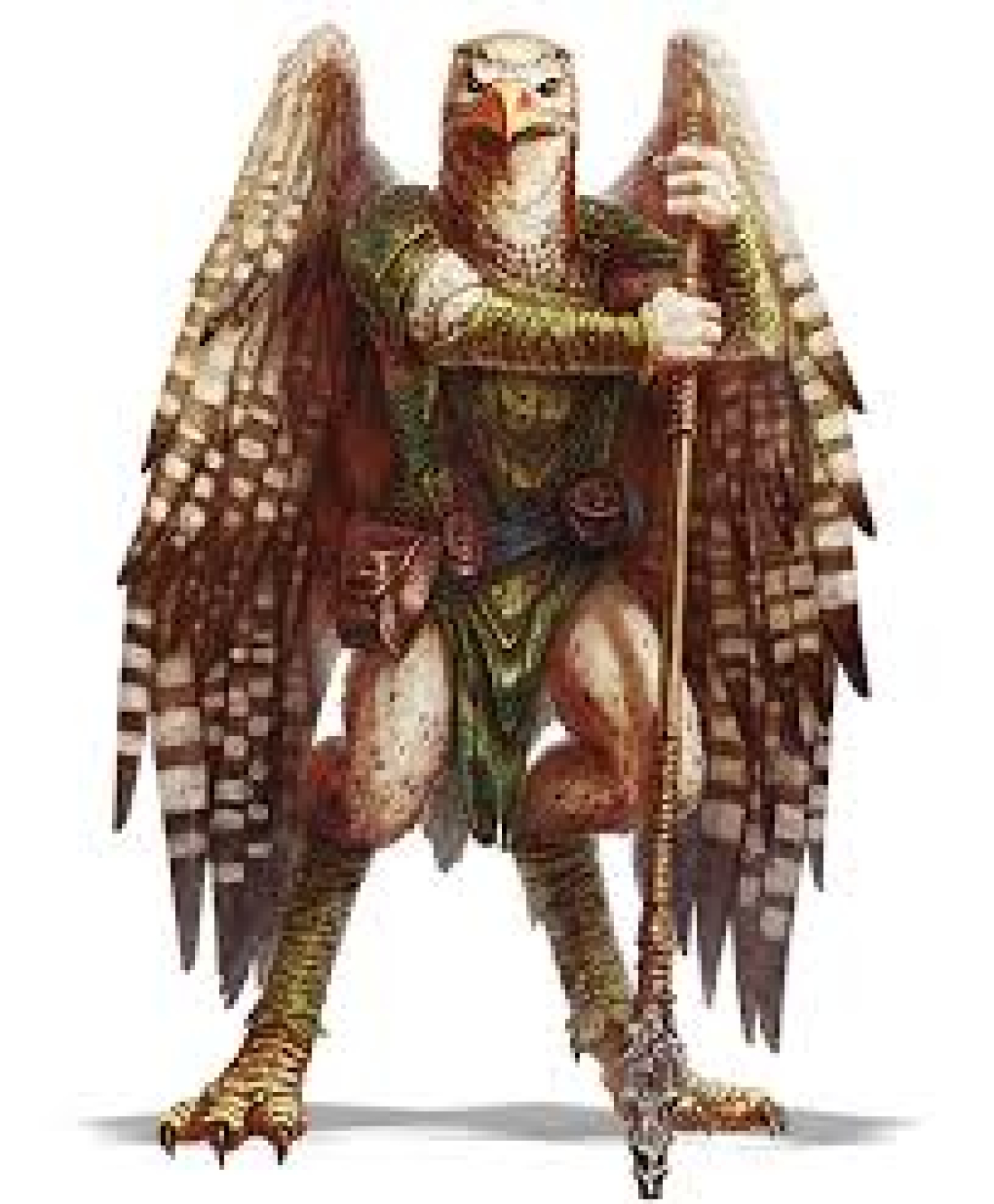 Aarakocra range the Howling Gyre,an endless storm of mighty winds and lashing rains that surrounds the tranquil realm of Aaqa in the Elemental Plane of Air.Making aerial patrols,these birdlike humanoids guard the windy borders of their home against invaders from the Elemental Plane of Earth,such as a GARGOYLE ,their sworn enemies.

In service to the Wind Dukes of Aaqa,Aarakocra scout the planes in search of Temples of Elemental Evil.They spy on malign elemental creatures and then either take the fight to those creatures or report back to the Wind Dukes.   On the Material Plane,Aarakocra create aeries atop the highest mountains,especially peaks near portals to the Elemental Plane of Air.From such heights,Aarakocra watch for signs of elemental incursions,as well as for nascent threats to their home plane. Aarakocra prefer to live their lives like the wind-unburdened and ever moving-yet they watch over a region for years if that's what it takes to guard against the incursions of Elemental Evil.   Aarakocra have no concept of political borders or property ownership,and they value gems,gold,and other precious materials means little to Aarakocra.In their eyes,a creature should use what is necessary and then cast what is left on the wind for others to use.

Search for the Seven Shards

The Wind Dukes of Aaqa come from a race of elemental beings called the Vaati,which once ruled many worlds.A creature known as the Queen of Chaos arose and initiated an interplanar war against Vaati rule.To combat the threat,seven Vaati heroes combined their powers to create the Mighty Rod of Law.In a battle against the Queen's greatest general,Miska the Wolf Spider,a Vaati killed Miska by thrusting the Rod into him like a spear.The Rod shattered into Seven Shards that scattered across the multiverse. Aarakocra seek signs of the pieces of the Rod's location in order to rebuild what is now known as THE ROD OF SEVEN PARTS.

Five Aarakocra within 30 feet of each other can magically summon an AIR ELEMENTAL.Each of the five must use its action and movement on three consecutive turns to perform an aerial dance and must maintain concentration while doing so (as if concentrating on a spell).When all five have finished their third turn of the dance,the elemental appears in an unoccupied space within 60 feet of them.It is friendly toward them and obeys their spoken commands.It remains for 1 hour,until it or all its summoners die,or until any of its summoners dismisses it as a bonus action.A summoner can't perform the dance again until it finishes a short rest.When the elemental returns to the Elemental Plane of Air,any Aarakocra within 5 feet of it can return with it.

Humanoid and Bird-like,With a head,beak and torso of a bird,Arms ending with claws and legs ending with talons,Large wings protrude from the shoulders.

Bird-Like (Eagle),Aarakocra do have varied eye colours of Yellow,Blue,Brown,Green and Black 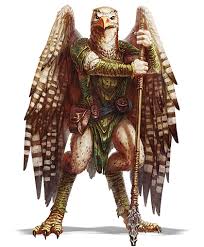 An Aarakocra Guardian by dndbeyond
Origin/Ancestry
Humanoid (Aarakocra)
Lifespan
40-80 Years Old (60 Years Old Average)
Average Height
5ft 6" to 7ft Tall (Averaging 6ft 6")
Average Physique
The Aarakocra looks much more bulky than it actually is because of its feathers
Body Tint, Colouring and Marking
All Aarakocra look identical to other Humanoid types,but to their own kind they see the subtle differences.Ranging in Colour from Golden Browns to Yellowish-White and Brown tones 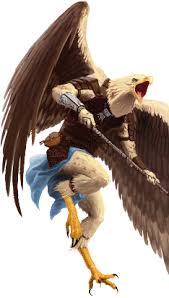 Aarakocra by Wizards of the Coast (WotC)D&D 5e


DIVE ATTACK: IF THE AARAKOCRA IS FLYING AND DIVES AT LEAST 30 FEET STRAIGHT TOWARD A TARGET AND THEN HITS WITH A MELEE WEAPON ATTACK, THE ATTACK DEALS AN EXTRA 3 (1D6) DAMAGE TO THE TARGET.