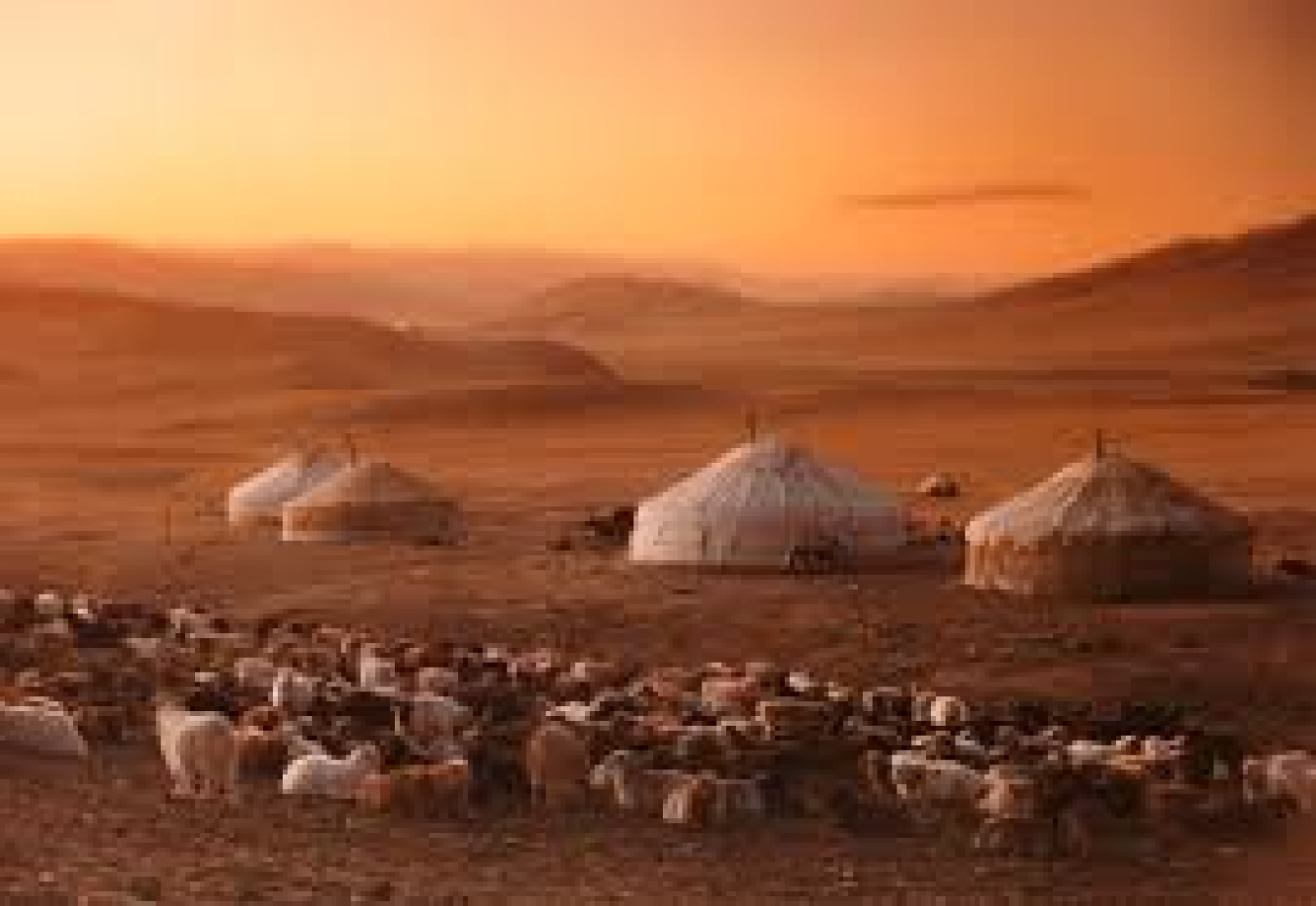 A Yurt is a portable,round tent covered with skins or felt (made from pressed Wool) and used as a dwelling by several Nomadic groups in The Northern Wastes,The Desert Regions of the Talosian Empire,The Great Eastern steppes and Beyond the Eastern Frontier .The structure comprises of a latticework of pieces of wood,(bamboo in some areas) for walls, a door frame, ribs (poles,rafters),and a wheel (crown).The roof structure is often self-supporting,but large Yurts may have interior posts supporting the crown.The walls of self-supporting Yurts are prevented from spreading by means of tension bands,one half-way up from the ground,the other just below the roof line,these help support both the walls and the roof ribs.A Yurt can be built on a wooden platform if the tribe has decided on staying in an area for longer than a week.During the Winter Moons a Yurt would be built upon a platform.

Yurts have been a distinctive feature of life in The Northern Wastes and The Great Eastern Steppes since Man started to migrate towards the end of the First Age.Nomadic Tribes migrating from Amoria were the first that used yurts and similar tent structures.The first written description of a yurt used as a dwelling was recorded by the ancient Thentian historian,Monk and Scholar,Brother Aldophus.He described yurt-like tents as the dwelling place of these Amorians ,a horse riding-Nomadic Tribe who lived in The Northern Wastes and Northern Pelosia region from around 14840KR/240TR.

Traditional Yurts consist of an expanding wooden circular frame carrying skins or a felt cover.The felt is made from the wool of the flocks of sheep that accompany the Tribe.The timber to make the external structure is not to be found on the treeless Steppes or the Desert sands of The Talosian Empire ,and would have been obtained by trade in these areas.Most timber frames would have been used for generations and only replaced when split or broken.In The Northern Wastes the Tribes use animal skins more than felt and they have surplus timber because of the dense heavy woodlands.

The frame consists of one or more expanding lattice wall-sections,a door-frame,bent roof poles and a crown.The (self-supporting) wood frame is covered with pieces of felt.Depending on availability,felt is additionally covered with canvas and/or sun-covers.The frame is held together with one or more ropes or sinew.The structure is kept under compression by the weight of the covers,sometimes by a heavy weight hung from the center of the roof.They vary with different sizes, and weight.They provide a surprisingly large amount of insulation and protection from the outside cold of winters,and they are easily changed to keep the Yurts cool for the summertime.

A Yurt is designed to be dismantled and the parts carried compactly on Camels,Horses,Mules or Oxen to be rebuilt on another site.Complete construction takes around Two to Four hours (Not including a Wooden platform).

The traditional decoration within a yurt is primarily pattern-based.These patterns are generally Symbols representing strength and protection,Strength being the most common.In The Great Eastern Steppes and Beyond the Eastern Frontier the Symbols would include four powerful beasts Lion,Tiger,Eagle, and Dragon.In The Northern Wastes the Tribes depict there Totem(Sacred) Animal,the most powerful Tribes being Horse,Cave Bear,Mountain Lion,Wolf,Snow Leopard,Mountain Bear,White Bear,White Tiger and the Boar .Most Tribes would also have stylized representations of the six elements Fire,Water,Earth,Air,Metal,and Wood ,considered to be the unchanging elements of the Heavens.Such patterns are commonly used in the home with the belief that they will bring strength and offer protection.All patterns can be found among not only the Yurts themselves,but also on Embroidery,Furniture, Books,Clothing,Doors,and other Objects . 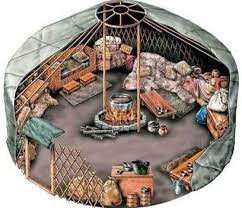 A Yurt Interior by Patrick Schneider

Most are of Circular Design and can vary in size.Can comfortably house 4-20 people depending on the size.

Usually a front entrance and a rear entrance.Huge Yurts can have as many as six entrances/exits.

A Yurt is usually separated into many rooms,A Common/Living room,Sleeping rooms,storage room for foodstuff and tools and an entry room.
Type
Hut 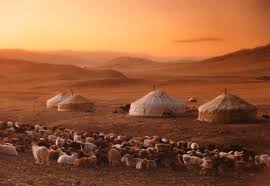 A Yurt by Wouter Naert

Answering: "Write about a typical house or dwelling in one of your cultures or countries."
Visit Loremaster Aemon's Competition Page Check all other answers to this prompt Competition Homepage