The lightwood tree appears in groves dispersed throughout the known world of Karenth.   During the day, the lightwood tree appears like a number of other deciduous trees. As the sun goes down, the bio-luminescence of the tree increases until the early hours of morning when it is at is peak, a single tree providing enough light to read by at 5 meters away. From this point the light tapers off until mid morning when it is now longer giving off any discernible light.   Processed wood continues this pattern of light and does not decrease in illuminance throughout its existence.   Its wide lance shaped leaf is about 20 cm long and slightly serrated although not sharp. The veins of the leaf are alternating and are slightly offset. The trunk of the tree is rough like a cottonwood, vertically ridged allowing water to flow down the trunk to the immediate roots.   Lightwood trees grow to a height of about 20-25 meters and can get as large as 80 cm in diameter if there is sufficient room to grow. Fey creatures have been known to be found near groves at night, reading or working crafts. During the dark hours, animals rarely venture near the groves, but a few of the herbivores, such as deer, will sometimes be found there at night.   East of Grayton's Lot, there is lumber village which is actively harvesting lightwood, and also working to improve the groves allowing for sustainable harvesting. However, the trees are difficult to cultivate, and the process of reproduction is not fully understood. The camp is hidden and a closely guarded secret. The wood from this camp is milled and sold to sign makers and other people.   As the trees are fairly rare and only exist in small groves, few of them have ever been found in the last 400 years since the Displaced arrived in Karenth. The few magic users who have examined the trees note that the trees have magical properties, but the light is only partially magical, and partially natural.   A handful of signs exist in Grayton's Lot made of lightwood, but much of the wood is sold to ship makers who use it for the railings of ships. Ownership of furniture made of lightwood is a status symbol as the wood is exceedingly expensive. There are rumors that one aristocrat had a bed made for his son who was afraid of the dark.
Plants

Nice article :) I like the idea of a bioluminescent tree and wood! Glowing road signs and ship railing sounds very useful :D   Would the wood also be a status symbol? "Look at my nice glowing table, see how rich I am" :D It could also make great bed for the children of the nobility if they are afraid of the dark…   I'm also wondering how this constant light as affected the wildlife around the trees. If it's a whole forest like that, it means constant light for the wildlife living around the trees, so it must be quite different. 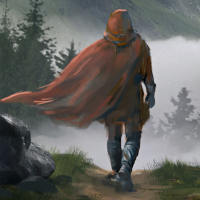 Those are excellent points! I have integrated them into the article and really appreciate the ideas and comment. I will try and flesh out the ecological impact a bit more too. Thank you, Amelie!

Very interesting tree! I especially like how the wood retains it luminescent properties even after being cut. The aristocrat making a bed out of it for his son was quite a nice addition :) Is there a certain color for the light or can this also vary depending on the tree?

That aristocrat is so sweet! But seriously just get the kid a lantern or something... -_- I swear, rich people. >_>

Hi Scott!   Nice plant article - I find the behaviour that the wood retains its bioluminescent properties post-harvest. I would probably use it to make arrow shafts that could potentially be used as a flares or to track a 'hit target'. Well done!

xtremepsy | Ölütanrı
Checkout my other favourite entries to the 2021 Peculiar Plant HERE!
Feel free to read, favourite, and comment on my entry, Digivine.
Powered by World Anvil