This is our home, and we will protect it... Goldbrick Euronglimmer, master Illusionist       The River Grandiath is known as a slow, large and gentle river, surrounded by forests with sweet birdsong, beautiful mountains, and its nights are full of glimmerbugs and a strange eerie music that can be barely heard.   But, despite its wondrous beauty, the place does have its secrets: Strange light in the night, rumors of faerie troops marching in the forest, and the occasional giant turtle sighting that sometimes scares visitors when they travel up the Grandiath; and then there are the more common occurrences, such as the occasional bandit, or the group of gnolls that sometimes travel from the Unconquered Grasslands to raid the gnome villages.   In the Old Days, the River Kingdom was once the preferred location of many of the Elven garden-towns; many a grotto and parts of the river are decorated with elven statues and architecture, now covered in moss, mud and patina. Though today the Gnomes and Kobolds have begun to unearth many of the sculptures and ruins that dot the landscape, even going so far as to activate some of the old constructs (such as the Weeping Angels) for experimentation, or repurposing such creations.   Today, there are three cities are that are important for the Gnomes and Kobolds of the River Kingdom:

The River Kingdom is, much like the The Valley Princes up North, surrounded un the large part by mountains, particularly the Mistveil Mountains, which many travelers avoid due to the inherited dangers of the pass itself; however, once going east, the Hunting Hills are a welcome sight due to the large quantity of game found there.   In the South, However, the climate begins to change: The placid grasslands and forests are replaced by Savannah, and strange pillar-like columns of the Stonewood Forest, but life still flourishes here.   In the East, however, the Rockneedle Valley is another thing entirely; it is a rugged desert, with a harsh climate and flat terrain, only broken by the strange monolithic Obelisk that dot the landscape, sometimes there are standing, oftentimes they have collapsed with the passing times, but their design resembles the floating towers in Twelve-Tower City.

The River Kingdom has some of the most interesting flora and fauna in the Karash, and though it lacks many of the gargantuan beast that live in Axalan, the River Kingdoms does have a few ripper claw gargantuans, as well as an array of river crocodiles and enormous fish the live in the river itself.   South the River Kingdom, where the Savannah begins and the Vale fades, the tall grasslands and hardy bushes and trees dot the landscape, with animals such as baboons and hyenas, as well as gazelles and zebras living in the area.   In the Rockneedle Valley, the vegetation is scarce and harsh: Plenty of thorny bushes and strong plants that are hardy enough to last months without water, and a good number of giant vermin and carrion creatures live in there.

Much of the River Kingdom's main resources lie on the Grandiath itself: Plenty of fish, plants for a myriad of uses, strong trees for lumber, and the mountains in Cogkeep provide the Kingdom with plenty of copper and iron for use and for trade. 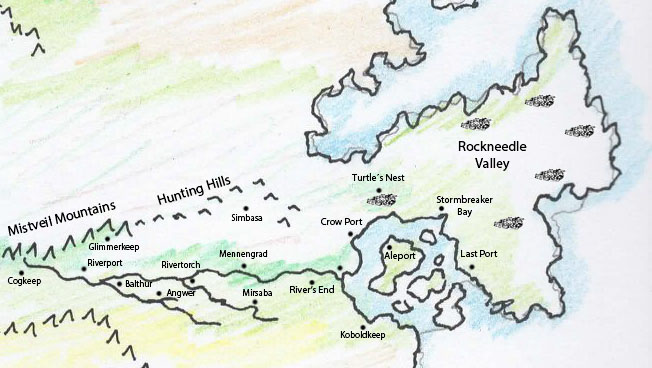 The Rout-Valley, the Vale, Valley of the Turtles
Type
Vale
Included Locations