"I no longer what day, or month are we in... Dante went insane and began to drink sea-water, I had to throw him overboard... I'm alone, I miss the pirate attacks we had in days past, at least there was something to do, something to eat afterwards... The sun has stayed in the sky for... Who knows... I can't sleep, can't think, can't eat voices voices in the sea, I see ships of dreams in the fog, I seemermaidshelpme..." Diary of captain Raig Altamira, found in the wrecked ship Dauntless.     Nothing but calm open waters, fog, and no wind, no even ships, and the glaring sun always in the midday; then laughs and ghost-ships sailing in the horizon, then sudden thunderstorms and reavers... Only to find that you have sailed for months and have only left the coast, or sailed for a few minutes and you have already traveled to unknown lands, such are the dangers of the Mistfae: A Strange part of Kasash that has a link to the strange realm of the Fey, but not the shy Dryads or the rambunctious Satyr, but the eldest of the Fey: Beings of such Beauty, Awe and Terror that can bring empires to their knees, or simply make your life slightly more interesting.   Even magic works differently here. In the Mistfae, magic is more temperamental, more raw and chaotic. Divinations don't work properly, and illusions can backfire or even come to life.   The Fae Coast, along the Grasslands of Ikele share the same connection to the Feywild, effectively making transportation from the North and South of Karash difficult, if not impossible, unless one braves the eastern seas or the winds, which also have their complications due to the The Great Waste.   However, despite this, the Fae Coast is not uninhabited: Pirates, reavers, madmen, and exiles from other parts of the continent make homes in the several islands of the coast, as well as other places have been used a staging point for more civilized ventures:

Due to the strange nature of the Fae Coast, time itself sometimes warps in the misty fog that surrounds the seas and some of the islands, so one can sail a hundred days and go forward a few inches, or sail a few moments and advance several leagues away; the islands themselves are also strange, with the largest one being a land locked in eternal Spring, and another part in eternal winter, separated only by a chain of mountains known only as The Mourn.

The animals that live here have strange qualities on themselves: Sharks with crystalline teeth, floating eels that sometimes appear in the mist, fish with iridescent scales, mermaids, selkies, and other strange creatures live in the oceans.   The lands also seem of have strange creatures: Pegasi, Manticores, Hydras, and other fantastical creatures make their home here, and trees with magical fruit are rumored to be found in the islands.

Besides the bounty of the sea, and maybe some of the fruit of the islands, there is little reason to go to the Mistfae Coast, except one.   Mithral.   According to accounts from elven historians, it is the only place in which large veins of Mithral can be found. 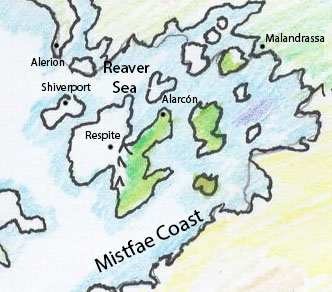