Orion Deneri is a scholar from a Carlissan merchant family. He graduated with distinction from the Grand Academy of Lannamon, where he was beginning his tenure as a professor of philosophy at the start of the saga. Orion also attended the Silver Star Adventurer's Academy for a year, where his intelligence and academic accomplishments came to the attention of the school's headmaster, Lenard the Archmage.

Unlike the rest of his politically ambitious family, who ran the Deneri Trade and Import Company, Orion preferred scholarship to business and had little interest in court intrigue.

Profile from the Sanctum of the Archmage adventure games
Orion is a seasoned adventurer and a trusted agent of the Carlissan resistance. A philosopher cleric and a fiercely independent thinker, his ever-questioning mind often puts him at odds with his brethren in the Church of the Divine. 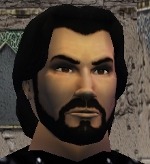