A Vast and Diverse World

Kal-Adur may be the name of the world, but it is only one of three continents. To the south, the land of Tahallamad. To the west, Ezoris. The people there are strange, they worship strange gods and practice strange magic. Worst of all, they were not stricken with the same plight as Kal-Adur. Many fear the peoples from these lands seek to use Kal-Adur and its people for their own benefit. A few have already established coastal colonies, much to the people's dismay.   Throughout Kal-Adur, the people are fractured into many different languages, ethnicities... and religions. Long ago most people worshipped the Old Spirits, but nowadays faith in them is slowly draining. Imported religions, minority beliefs once squashed by the now non-existent nations, completely new ones made in a new world... some people even worship no one but the whims of the world itself. All competing to become the world's de-facto religion. No one knows which ones will thrive.

Long ago, spirits guarded Kal-Adur. They appeared to grant guidance and wisdom, and in rare cases, magical powers. Called spirit-blessed, these people changed the world. It was once possible to be blessed by multiple, of course, but few gained that achievement. Either way, they shaped the rise and fall of nations.    And, at the center of it all were the Lunosa. Reincarnations of the sun and moon spirits, the Lunosa were two women joined in mind and spirit. Apart, they had extraordinary gifts. Together, they had the power to change the world, whether it was for good.... or bad. The Lunosa existed in a balance, everything existed in a balance. The Lunosa were supposed to maintain that balance. They were supposed to guide the world to happiness, to peace... but they also had to the power to destroy it all.   Two hundred years ago, the Sun Lunosa of the time, Elanor Varden, was murdered. By none other than her fellow Lunosa, her supposed closest companion, Selena Hashen. The world was thrown into chaos. Elanor's death had broken the fragile balance of the world, and with it, the bond between human and spirit was broken. The spirits' anger caused great Disasters to plague the land, destroying nearly all of civilization. Only a few knowledgeable enough to survive came out alive.    Since then, humanity has been healing. Trade routes are being carved out of the wilderness, modest cities are forming. Yet most people are still farmers, and nation-states are yet to divy up the land in large numbers. Most people are used to taking care of themselves. They've had to, with no one to guide them.

The world of Kal-Adur may be peaceful, but it is not without conflict. Whispers circle about mysterious happenings in the night, entire villages disappearing... no one can determine the cause of these incidents, or if they're even true. Many institutions have denied their legitimacy, but many worry they do it simply to keep the peace. Or perhaps they are involved with them and simply don't want to admit it.    Despite all that, the average Kal-Adurian is not concerned with these unknown dangers. They have their own happy, peaceful lives, why should they care about some insignificant rumors? Yet many warn this danger is what brought the Betrayal and will not hesitate to destroy everything the world has worked so hard for since. 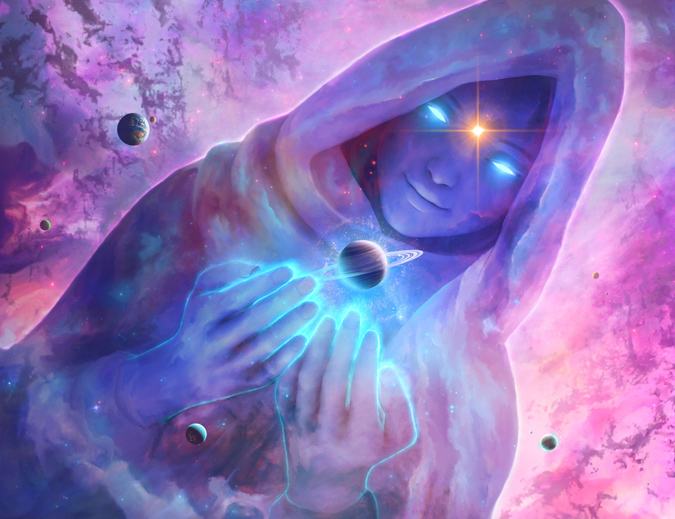 +Goddess of the Universe+ by ERA7

Folks say we're all the creation of some distant goddess from a strange and unfamiliar realm, but nobody knows if that's true or not. But, maybe we should just make a life for ourselves, goddess or not be damned.
—Philosopher Nilean Entere

Hi all, I'm a young creator, artist and writer based in the northeastern US. I've been writing and drawing since I was a kid, and I've never stopped creating since. Besides that, I also like to play video games like Minecraft and Animal Crossing. Fantasy has always been one of my favorite genres! I'm also a huge sucker for plot twists, hence why my stories often have a lot of intrigue involved.

While Kal-Adur was scarred by great tragedy, it has been healing. Most civilians live peaceful lives farming in small villages, never worrying about anything outside of it. It is a post-apocalypse, but unlike most in the genre, it retains a peaceful tone. It is meant to portray that at the end of the day, both tragedy and happiness are temporary, always flowing and shifting. One simple choice can mean all the difference.

The world of Kal-Adur was created for a current WIP of mine. The current working title is Sun & Moon, but there is a strong likelihood the name will change. It's based strongly on the world of Ghibli movies as well as Avatar: The Last Airbender.