In the mid day heat, a steady sound paces across the Crocuan dunes. Over a sandhill a light tan head becomes visible, as the animal ambles it's way towards the destination. It's rider, an elder man with a bushy beard, appears to be struggling with some papers and books. A few stray papers falls to the dunes, covered in fresh ink, but are disregarded. A person with less experience would worry about getting lost, but this man seems not to even notice his surroundings at the moment. He knows what all people traveling the dunes on a riba knows. The animal, who have walked these dunes many times, remember where it is headed.

The riba is a four legged mammal with heavily padded feet, ending in two toes. It has an elongated neck which has a short bristled mane. The tail on the other hand is has longer hair which is very effective for swatting insects. It's covered in a shorter, rougher fur which can be either pale tan, dark brown or anything in between. On it's head, both the male and female riba grows two bumps which are mostly cartilage. It's theorized that this might be for mating displays, but the domesticated ri'la has a somewhat diminished bump due to selective breeding. It's eyes are monocular and placed on opposite sides of the head. The ears are smaller but very mobile, and is a easy way to read the animals mood. It's incisors and canines are sharp in order to cut and sever tough edible material, while the upper and lower molars are more adapted to chewing rather than cutting. The riba is an omnivore and will try to eat pretty much anything it comes across, but it heavily prefers plant material (e.g. foliage and grass) above a rotting carcass. It does not hunt for prey, but is an opportunistic feeder.

The female riba is succeptable to mating twice a year. The egg is fertilised by the males sperm, and so begins to form the fetus which grow inside the females womb. The riba only gives birth to one calf each pregnancy. Two or more calves is extremely rare. The gestation period takes about 11-13 months.

It takes about 3 years for a ri'la to be a fully grown adult. The calf drinks it's mothers milk for about 18 months before it is weaned, the first 6 months the calf is only sustained on milk. After that, it eats more and more solid foods (plant material, eggs, insects, etc).   Calves that are not handled properly from the start will be wild and hard to control in it's later life, this is particularly noticable when you are to break them in and ride for the first time. Unsocialised ribas are skittish and will not tolerade handling nor riding.

The riba mainly inhabits the edges of the crocuan desert found in the center of the continent, but the domesticated riba will survive in most places which has at least a 10 degree (celcius) warmth. Any lower than that, and it freezes slowly to death as it's body cannot produce heat in the rate as it loses it.   This animal lives in flocks up to 15-17 animals, but in scarce times the flock will scatter in order to find food. The size of the flock appears to depend on the resources available to them.

The riba forages for it's food, picking up most things it can find in the desert or it's edges. It eats mostly foliage (plant based diet) but will feed on carrion if available. It does not hunt but will eat what it finds.

Mostly found in the center of Crocua, where it's home territory is. 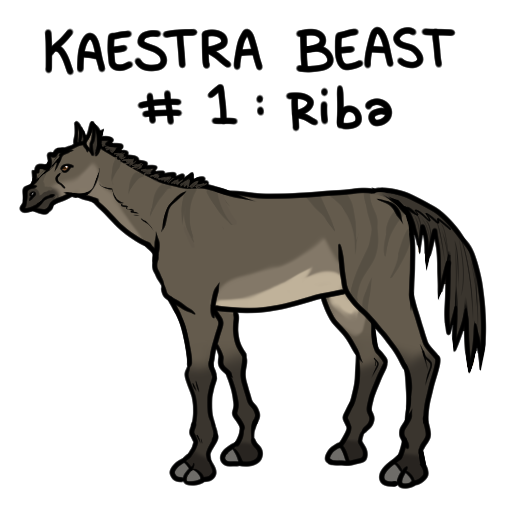