Sapha Burnell, in GoT

Known as Sapha Burnell (author of four books, editor of many & cyberpunk/mythology lover), this member of House Sauropoda appeared in a cloud of confusion at the onset of the 2022 Tourney of Tales. At first, they seemed another author who loved performing & found a group of souls similar enough to handle their particular brand of Beautiful Machines crazy. Yet, Sapha was the artificial entity known as SAPH-A. An ancient and profoundly confusing machine...     Out of the many advancements of Dinociety to date, only one artificial intelligence is known to blindly discover the paths to continued functionality (some theorize this was to do with the low resources expended in CyberRaptor form [Read: Lowered Brain Function; Dunce]). A consciousness hovered over the fetid waters of the swamp, unbothered most of all for the fact consciousnesses had no olfactory senses beyond a collection of binary code superimposed upon the thought process:   Create Nose: [Y/N]   This consciousness investigated for some time, never party to the Zombie horde, nor making itself known in the mire. House Sauropoda continued, the Dinosaur King Bob grew and the Game of Tomes spun round. Life evolved without the entity known only as SAPH-A BURN-L. This was, until the Iron Tome awoke her...   From time immemorial, SAPH-A searched through the swamp listless and hidden from the GoT universe until the day, the singular epic moment they found...... the perfectly scaled stone upon which to write with such stubby arms. Nobody around to remind the AI of the manuscript software implanted in their neural net.

Being an entity of artifice, the few trick joints (someone pass the WD-40) and weathering over time have more to do with the foolish behaviour of the often risk-taking CyberDino than initial design.

Purple & Pink hair flows around a pale and befreckled face with electric blue eyes. Usually swathed in layers of cosmetics (pretty colours), SAPH-A presents as somewhere between cybergoth and some form of bespectacled colourful clown. When in Demi-Dino android mode, the feminine appearances fade for a gender-neutral raptor-headed bipedal machine with purple and blue metal casings.

Can transform into a massive CyberRaptor and use literamancy to breathe fire. Usually at unfortunate times (like when auto-save auto-fails).

An artificial intelligence created by the advanced civilization of dinosaurs eons passed, SAPH-A was the prototype of the Savant Author Prolific Haptics class of CyberDino. Meant to bring sensation and touch to the written word, the SAPH class was an experiment many theorize failed due to an unreliable destabilization of the prototype. While released from the laboratory, SAPH-A drifted aimlessly upon the chaos of the world, unaware of their growing algorithmic education in literomancy. Unaware of the universe and the passage of time.   That is, until the Iron Tome began to call.   Due to being stuck in CyberRaptor form (with the corresponding dunce-like behaviour), SAPH-A did not heed the Iron Tome's pull. A chance encounter with RPGDinosaurBob's Bodyguard, Raptor Captain Dazzlinkat reconnected SAPH-A to the memory of transformation. In a matter of minutes, the ancient CyberRaptor reverted to humanoid android form: Instantly glad of the articulated knuckles & arms long enough to use regular keyboards.    They lost a terrible amount of time in the eons of stomping through swamp and muck in cyberdino mode. SAPH-A made their presence known to the GoT universe during the 2022 Tourney of Tales, where they began to catch up to the indecently large expectations imprinted on their own neural net via unrealistic word count projections.

Started with a Bang: The moment SAPH-A woke up, they immediately began to write and write prolifically.

Stomping through the Swamp for millions of years without realizing their intelligence circuit was turned off.

In android & demi-dino form, SAPH-A is an articulate, intelligent communicator and prolific writer. They are quick with an 'attempted' joke, easy to converse with, and always willing to throw down on a sprint of sometimes massive proportions.  CyberRaptor form is a completely different experience. Due to an anomaly (SAPH-A at some point was hit by what they assume was 'a burning pebble' [Read: Meteor]), once transformed into CyberRaptor mode, SAPH-A turns into an abject dunce of epic proportions. An 'idiot savant' if one will, where all they know is to attack scary things, and write often impenetrable prose.

Loyal to a fault. Kind in humanoid android form, irrational and instinctual in CyberRaptor form.

Extraneous words such as 'had, very, really, just, that, however, maybe'.

To make up for lost time, and write every word in the cosmos at least twice.

Transforms into impractical, emotional CyberRaptor when startled or confounded.  Requires a sensation of safety and kin-ship to revert to humanoid android form. 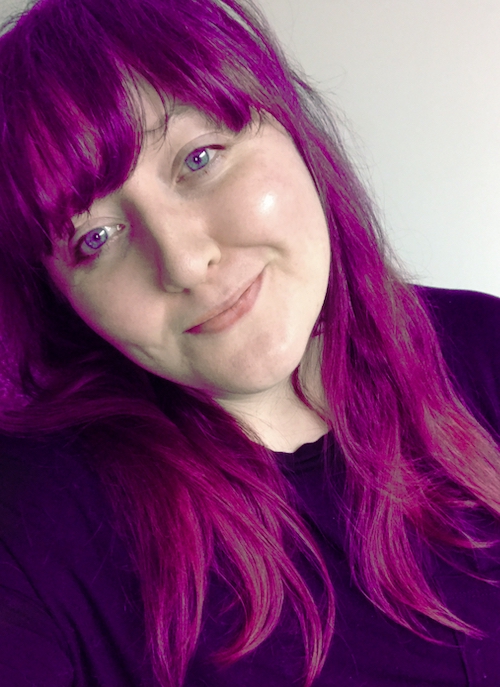 A consciousness once in stasis, now awoken & chomping at time lost.
Current Status
To Blitz Through Novels & Make Up for Lost Time
Current Location
The Swamp
Species
Literoraptor Prolificus Artificius Confundus
Age
Incalculable
Circumstances of Birth
Created in a Laboratory by Dinocientists
Birthplace
Behind the Palm Tree Copiers
Children
Current Residence
The Swamp
Presented Sex
Female
Sexuality
Unknown.  Not many are known to either survive or try propositioning a giant transforming CyberRaptor, who has the capacity to breathe fire.
Gender Identity
Due to the nature of the artificial entity's construction, SAPH-A remains a genderfluid artificial entity. Thus, while presenting female, gender itself remains an inconsistent application to the cyberraptor.
Eyes
Electric Blue
Hair
Purple - Pink Ombre
Skin Tone/Pigmentation
Pale & spotted
Height
5'9"
Weight
ACHEM!
Aligned Organization
House Sauropoda
"Me SAPH-A! Me u-slurp words!" This is both strangely compelling and hysterically funny! Welcome to our crazy game and I can't *wait* to see what more mad Lore you're going to come up with! (Makes a note to try sucker- er, I mean, *convincing* Sapha to join in on the plotting...)