Sun is one of the three High Gods, and brother to Moon. He was created by Charznos and Orain to govern over Jiwenia.

Opposite of his twin sister, Sun is playful and intelligent with a wild soul and a logical outlook on how things work. Despite possessing a curious personality, he believes the laws of engagement and separation must be practiced and is known to enforce them. He finds himself engaged and captivated with the forming stories of mortal lives, frequently asking Fate for the tales of mortals and then watching as the paths expand before them.   Sun is extremely fond of puzzles and due to a highly strategic mind, he finds himself mostly looming around those engaged in war and politics. The machinations of courts is a favorite past time of his and it is not odd for him to place bets on sides with other deities. He is unforgiving, in the most part. Believing that everything happens for a reason and it is a mortal's duty to pronounce themselves the victor in conflict. Though this is true, Sun has a soft spot for those with blazing spirits and souls who have been dampened. He loves an underdog, especially one whose future is not fully written out.

The Sun, a warrior holding a shield, a flame, a lion, and a sunstone.

Sun, like most deities have multiple forms. Though, being a High God sees him with three forms instead of the usual two.   Spirit Form also known as his birth form, this is Sun's true form though not the one he usually uses. Being the representation of both fire and earth, Sun's spirit form is a rock-like being with cracks in its form. Through these cracks one can see a continuous flow of lava. His eyes are a blazing orange and there is constant smoke coming off of him.   Being Form also known as his typical form or hominid form, this is usually the form many see Sun in and what many statues are of. This form sees him with long flowing red hair, a brown goldish skin tone that can sometimes either have golden glitter or cracks that glow golden. His sclera is black and his eyes a mix of orange and red and appear like a ball of molten fire. In this form he is typically seen wearing a golden robe.   Animal Form 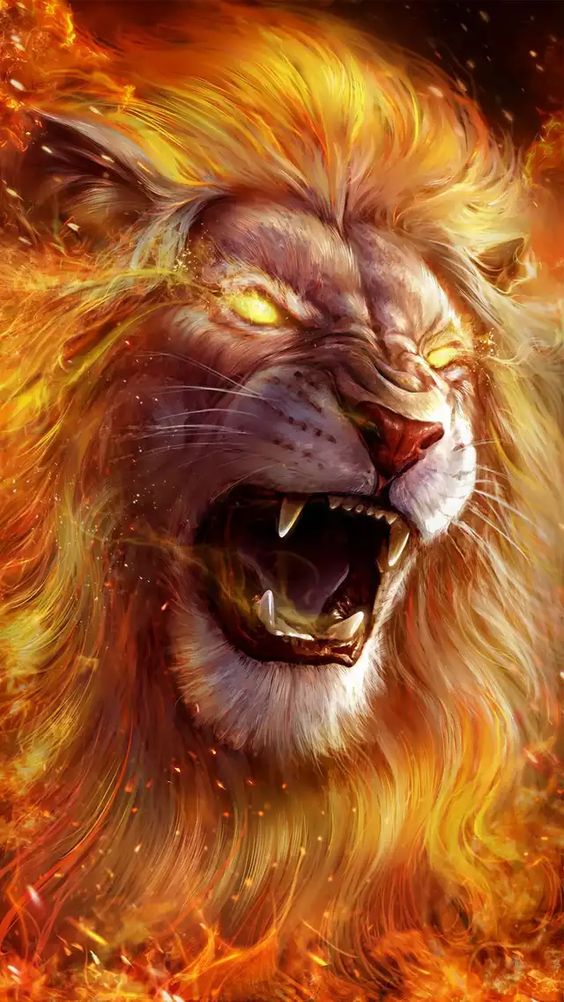 is the last form, and his rarest form, is his animal form. He transforms into a lion who is entirely made up by fire, save for his face, and paws. There are only a few texts that portray Sun in this form and all of them consist of him being filled with rage or in a protective headspace.

Created alongside his sister, Moon, the creators entrusted the newly formed planet to their children and are thought to still be building the universe to this day.

In the early beginning, Sun covered all of Jiwenia with his light. This was less due to obligation and more so to keep the being known as Darkness from showing himself. Though successful in forcing Darkness to go into hiding, Sun found himself growing weary and his energy draining. He would not be able to continue this action. To add to that, it was hard to expand and create life upon the surface of Jiwenia due to his once blazing light and then its waning.   His sister came up with an idea, the two shared light, though hers was much softer. The two would switch, allowing the other to always get enough rest before taking up the duty again. With the ability to now rest, Jiwenia now had its sun and moon cycles and day and night. And Sun was able to not only do his job but to also focus on other ventures.   The first thing that him and his twin did (it is argued whether Darkness had a hand in helping as well) was create the deities known as Nature, Cosmos, and Ludanis. The triplets started a new tier of deity known as Top Tier or Top Gods. Life began to thrive on Jiwenia and a balance met. Continents formed and biomes created, fauna and flora came into existence. It is unknown how long this took, as for many the first known recorded history is of the Kreani and their destruction which dates back to -200 of the Beginning.

The Creation of Races

During The Beginning, Sun created his first Kre race known as the Kreani. Sadly, they did not make it as an unknown infliction ravaged their culture and spared none. Along with his sister he also made the Kren, the first Kre species as well as the first true sentient creature of Jiwenia. This should be noted because even though they are counted ad the first true sentient creature, before this all of the High and Top Gods had created dragons, a sentient race but at the time were too blinded by power and rage to be counted as such.

When Darkness created his species known as the Cimmerians, he inevitably unleashed what is known as the taint onto the world. This disease warped nature and killed any being not born with the taint. Many historians have always believed that Sun's campaign against Darkness was purely due to the creation of the species but after further learning, many believe Sun had realized that this same disease was purposefully set upon his early species, the Kreani. And this is what led to Sun bringing Darkness to trial.   A council was held to determine his guilt and sentencing and with Sun at the helm, Darkness was sentenced to a prison known as Kiamet which, at the time, was also forming into his domain.

Sun is the son of Charznos and Orain, the two celestial masses that created the universe. Since his birth, Sun has only spoken to his parents when they have called upon him which is quite rare. He has a fraternal twin, Moon. Born at the same time and entrusted with the same planet. The relationship between the two is strong, as one would believe it to be. They work in perfect tandem, total opposites, but with the same goal and same want, to make sure that Jiwenia is thriving. But, due to their differences, Sun mostly spends his time with other deities who share in his views. He is a protective brother who will insert himself into her life when he feels it is needed, checking up on her and constantly attempting to stop her from making what he views as mistakes.   Sun, like Moon, has quite a list of children that consists of deities, species, and creatures. Out of all of his children, he can mostly be found around Ludanis and Fo'diur, both who enjoy their father's presence. Species wise, Sun created the Kreani and Uqanan. And helped to create the Kren, Phaizarn, and Rekilese.

Gifted to him by his creators, Sun's companion is a female mongoose known as Sol. She mostly speaks in riddles or fails to complete her sentences, and only Sun is able to truly understand what she means. She is curious and very energetic, never lying in one place for too long unless she's extremely comfortable or is listening to a story. It has also been noted by those who swore upon meeting her that she enjoys art. 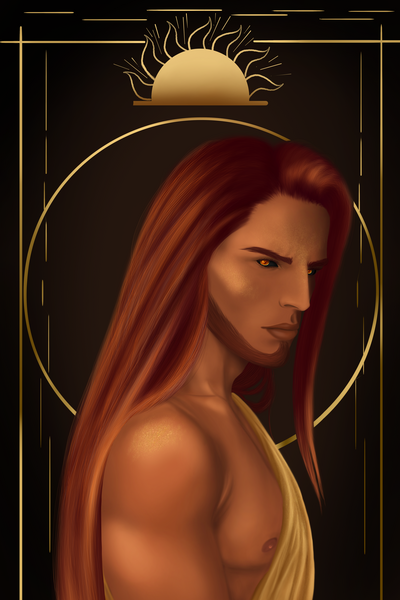