Moon is one of the three High Gods, and sister to Sun. She was created by Charznos and Orain to govern over Jiwenia.

Moon is typically understanding, calm, caring, and far more emotional than the other two High Gods. She shows care for every living thing on the planet, regardless of origins, and believes strongly in second chances. She believes that each creation has a light within them, and it is up to them, and those around them, to bring it out. She strives to discover and nurtures this light. Due to this, it is not unusual to see her roaming the forests, following these lights. Not usually spoken about is Moon's mischievous side. She has sneaky tendencies and many fail to even see her hand in some of the things that she has helped cause, good or bad. Only a few stories ever speak of this and her mysterious trait.
Moon understands her position and rarely interferes with the lives of mortals. Instead, she silently rests in the sky and watches over them, listening to their prayers and their cries. Many view Moon as sympathetic and believe that she weeps with those who suffer under her gaze. Despite what an individual may believe, it is rare to find anyone who downright hates Moon. The majority either celebrate her or do not.

A moon, a wolf, an owl, a teardrop, a moonstone, and a figure with a star in their hands.

Moon, like most deities have multiple forms. Though, being a High God sees her with three forms instead of the usual two.   Spirit Form also known as her birth form, this is Moon's common form and the one that is most likely to be seen in. Though statues typically portray her in her being form, in books and ancient texts she is drawn in this one. This form is a thick wisp of smoke that, at times, looks more like floating flowing water. It is a mix between both her air and water energy. Her turquoise core is visible and she leaves a trail of fog behind her.   Being Form also known as her typical form or hominid form, this is usually the form many see statues of Moon in. Despite that, texts prove that this is her most rare form. She has long white hair, a blue-ish and slightly grey skin tone, and silver glitter along her that sometimes shifts into stars. Her sclera is black and her eyes shades of blue that resemble a full moon. In this form she is typically seen wearing a long flowing dress. To better fit in when walking amongst humans, her skin tone will take a darker brown complexion.   Another version of this form is dubbed her 'dark form.' This variant sees her looking the same though she wears a black dress and dons a long black veil that obscures most of her features. Her skin tone is paler and her eyes, though still the same, are far more haunting and shows destruction.   Animal Form 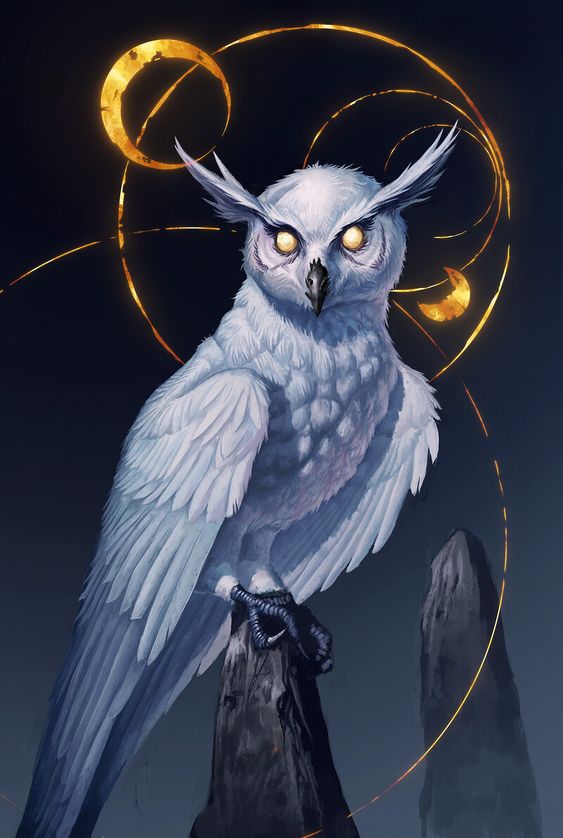 Watcher of the Night by Minard Maxime
is another form that texts claim is favored by the spirit. If you ever glance around and see a great white owl with golden and blue eyes then you may have just been visited by Moon. Her animal form is that of a beautiful white owl with inquisitive golden eyes.

Moon was created alongside her brother, Sun, purposely by Charznos and Orain. The creators entrusted the newly formed planet to their children and are thought to still be building the universe to this day.

In the early beginning, while Sun covered Jiwenia with his light, Moon raced across the land to discover all that she could. She would plot and plan where certain places could go and envisioning the future. It was only much later after her first attempt at creating life, did she realize that something had to be done about her brother. His light was too brilliant and killed everything, and when she was finally able to create something that could withstand it, his light waned and it would die because it wasn't enough light.   Moon made a deal with her brother, stating that they would take turns covering Jiwenia and thus the sun and moon cycle was created along with day and night. It was at this time that she also caught her first glimpse of Darkness. Due to her brother, the High God has been in hiding but his curiosity drove him out of his cave and into Moon's light. After days of watching him, Moon finally approached and made a deal with Darkness. That as long as he promised to never coat the world in darkness again, she would share the night with him.   The two became fast friends, Moon all too excited to show the being the world that he could have a hand in shaping. As their time together grew, so did their feelings. The two cared for one another deeply.   Early Jiwenia years saw the creation of deities known as Nature, Cosmos, and Ludanis. The triplets started a new tier of deity known as Top Tier or Top Gods. Life began to thrive on Jiwenia and a balance met. Continents formed and biomes created, fauna and flora came into existence. It is unknown how long this took, as for many the first known recorded history is of the Kreani and their destruction which dates back to -200 of the Beginning.

The Creation of Races

During The Beginning, Moon created her first Kre race known as the Kreol. Being that were withdrawn but craved the soft light of Moon and saw a boost in both their senses and magic when Moon's light shined over them. Along with her brother she also made the Kren, the first Kre species as well as the first true sentient creature of Jiwenia. This should be noted because even though they are counted ad the first true sentient creature, before this all of the High and Top Gods had created dragons, a sentient race but at the time were too blinded by power and rage to be counted as such.

When Darkness created his species known as the Cimmerians, he inevitably unleashed what is known as the taint onto the world. This disease warped nature and killed any being not born with the taint. Despite Moon's pleas, Sun took the High God to trial and he was found guilt and sentenced to a prison known as Kiamet which, at the time, was also forming into his domain.   After this, Moon became absent. She rarely showed up in texts at the time and only speculations about spotting an owl that appeared like her would show. It is a mystery of what Moon went through and was doing at this time.

Moon is the daughter of Charznos and Orain, the two celestial masses that created the universe. Though physical interaction with her parents is not possible, Moon still speaks to them as much as she can, leaning on them for advice. Moon was especially reliant on her parents' guidance during the earlier years of Jiwenia.   Moon also has a fraternal twin, Sun. Born at the same time and entrusted with the same planet. The relationship between the two is strong, as one would believe it to be. They work in perfect tandem, total opposites, but with the same goal and same want, to make sure that Jiwenia is thriving. But, due to their differences, Moon will usually spend time away from her brother and will only meet with him if needed. She much rather spend time around others.   Along with this, Moon has quite a list of children. They consist of deities that were created by her hand, as well as species that she created. She has never spoken of her favorite, but it is quite apparent that she likes to spend her time around Nature and Cosmos. Species wise, Moon created the Kreol, Sairs, and had a hand in creating the Kren and Arakeanee.

Gifted to her by her parents is her female wolf companion, Luna. Luna is a dire wolf whose coat is all black, sometimes a dark purple, with galaxies placed upon it. When a shooting star is seen, it is also portrayed on Luna's coat. She is a protector, first and foremost, watching over Celestiana and if not there, then always by Moon's side or doing Moon's bidding. She is calm and observant, a character who much rather look on than actively get in the middle of anything. She rarely speaks and when she does, it is blunt. 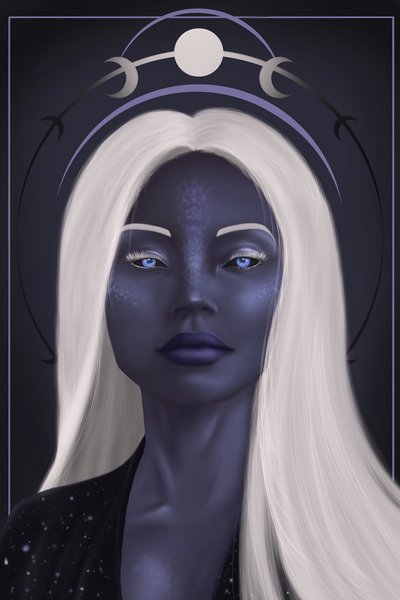 Appearances
For the Crown
Throne of Ashes
Status
Alive