I am Jerna, Jerna is me. I personally think Jerna is the coolest person in existence, but a lot of people don't. I think they're wrong.

Life was great as a child. I was born in some random village in Etrea that we stopped at for a few days. I was looked after carefully by my father and mother. That makes me think, I never knew my parent's names. I always called them mother or father, and everyone else in my travel group just called them Sir or Ma'am. I wonder why... (That was a brag, if you couldn't tell.)

I wasn't formally taught as a child, no terani is. Instead, as we trekked across the lands, I was slowly taught about every creature and plant, every mineral and every food we came across. That was fun too, and by the time I was twelve I had learnt over two hundred plant species, animal species, all of which were incredibly fascinating to me. That was definitely where my love for adventures and discovery started.

When I was thirteen, I thought that running from my travel group would be a really smart idea. Spoiler alert, it was not. I ran off into the woods that our group were walking past, while everybody was asleep round a small, dying campfire. Nobody had noticed, until they heard my screams. I had unfortunately stepped on a tiny snail, and this snail had a shell so sharp it cut my foot. Being thirteen, I thought I was going to die. Those screams not only attracted the attention of my parents, but also of a particularly dangerous dragon, a cavernous creeper. This night dwelling dragon launched straight for me, as I froze in fear, but luckily my parents had found me just before the dragon got me. The dragon was killed after a long fight, but unfortunately my father had severe wounds.

Three weeks later, I found out my father had been infected from the wounds. He didn't have very long to live, because there was no cure for this disease as cavernous creeper attacks are so rare, there is no point in making a cure. It wasn't long after that he passed away, and the funeral was held just a day after his death. It was a hard time for me and my mother, but we got through it okay. The funeral was nice, lots of warm memories were shared, we got to say our last goodbyes, and of course tears were shed.

Nothing really major occurred in my life until I left my travel group, at the age of seventeen. I had some revelation in a dream one night, that I swear was caused by some food I had the night before. I dreamt myself travelling the planet, discovering all of these amazing creatures, and then one second later in my dream I was in space, fighting giant monsters and meeting God. It was a weird dream, but an inspirational one. That very morning, I thought long and hard about the dream, and decided I wanted to adventure the world, and I wanted to see everything for myself. I had only discovered part of Etrea, but that was only one continent and there were four more to see, as well as hundreds of thousands of islands scattered about the seas. So I packed my bags, ordered a specialised camera robot named Little L from Zivok in my travel group, and set off the next day.

My early days of being a travel scholar were very difficult. I didn't get many people to interiew, since I had no degree in writing, I didn't know how to write or interview, and I was young. Most travel scholars back then were fairly old, and had seen lots of the world. I heard that being a new travel scholar was difficult. so I was expecting it, but it is also very demotivating.

I remember my first log in my journal too, gosh that was fun. I took a flight to Kazaharo Cliffs, an island not too far from Etrea, to start off my journey. It's not exactly in the spirit of adventuring if I'm taking a flight there, but it was just to start off. I landed close to the Night Howler's Den when I landed, and as soon as I got there the dragon took off again and I was left on the island, completely alone. I spent 3 days wandering about, travelling west until I found a village. I had discovered an unusual village, which they named Straggler's Bay, since every single inhabitant was stranded on the island, within a tiny bay.

Apparently, a strong current circles the island and brings and incoming boat or small ship straight into the bay, and nobody can get off the island unless they fly. I spent a few days in this town, before venturing south and discovering two more, Khaltos and Neihlar. I was super happy in these towns, until I found out they were on bad terms with each other so I quietly left, but not before I recieved a Royal Crown from Eyptos, the leader of Khaltos for being the best visitor.

I won't go into detail about much more in my life, considering there is anoter 250 odd years to tackle, but to sum up: I have travelled across the globe yet barely seen everything, I have met thousands of amazing people, discovered thousands of incredible animals and plants, seen thousands of islands, each with beautiful scenery seen nowhere else. I am truly living my best life, and I wouldn't want it any other way. 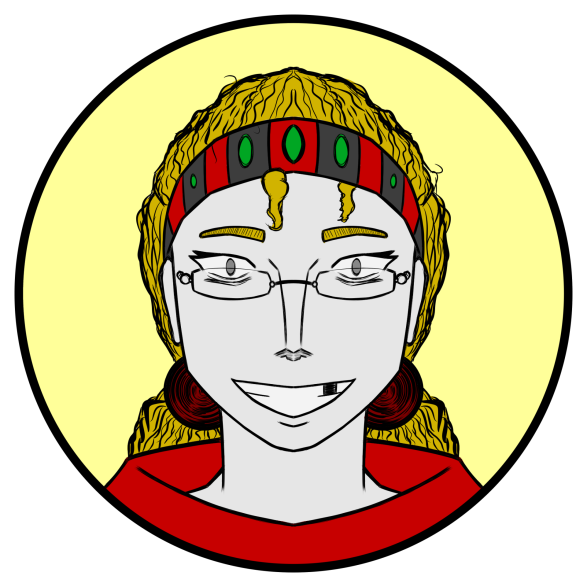 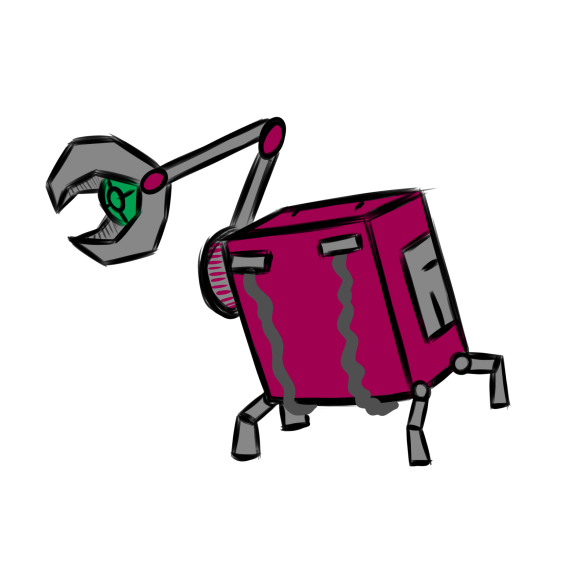 Obviously, I am the most stunning woman on the planet, but I am showing my age a little. After almost 300 years of existence I'm slowing down a bit, and I'm not as young as I used to be. As any terani does, I have radiant grey skin, with tiny light freckles below my eyes that are barely even noticeable. I don't even think my portrait features my freckles, they're that unnoticeable.

I've been told I'm short so many times. I am not short, I am average sized for a terani. It's not my fault my species can't grow much more than 5 feet, so I'm stuck at 5'2 for the rest of my life. I tell people I'm 5'9, but from the looks on their faces they do not believe me. Outrageous. 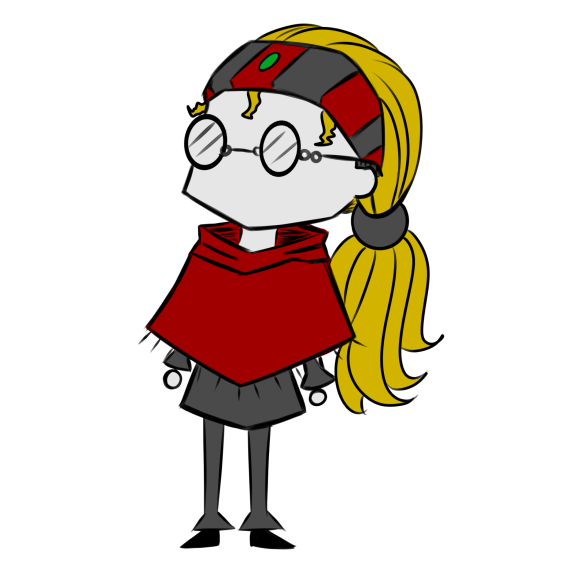 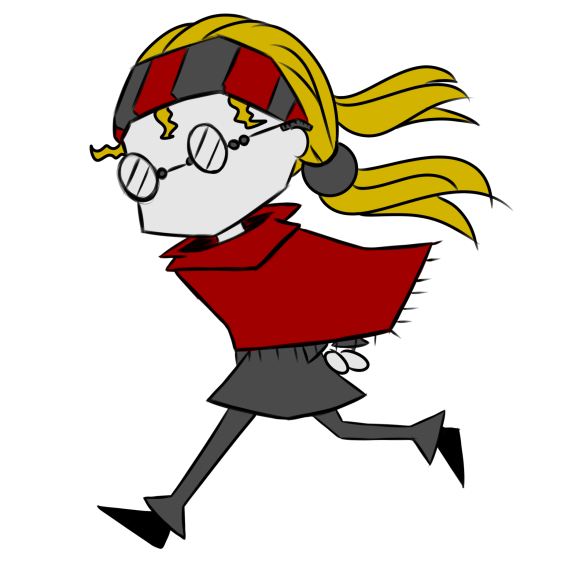 It isn't on my face, but I gave up on styling my hair years ago. It's so tangly now, I simply just tie it up and keep it from flying in my face. Does it help? Not really, but it's better than four feet of hair waving about, blocking my vision.

I wear the most stylish glasses I could find, in a private market in a small town in Maerkhor. These glasses contain very tiny crystals, which enhance my vision even further from the average person's, which really helps keep me out of danger when I'm adventuring, and also just helps in general.

I've been given many fancy accessories while travelling the planet, my favourite being the Royal Crown which sits on my bed at my home in Khaltos. This royal crown is incredibly significant in Airite culture, symbolising wealth and class. I have neither of the two, yet I still have a crown, so maybe I'm cooler than I thought. Eyptos said no to me taking the crown home, as he felt weird about it, so all I have are pictures as proof.

I think Little L qualifies as a tool, since I carry Little L around literally everywhere, never leaving my sight. Little L is the most handy piece of equipment I've ever seen, able to take clear pictures while running, submerged in water or lava, and even falling through the sky. Little L has a small compartment, used by me to store small items I collect on our travels, usually filled with cool seeds that I want to plant when we get home. They usually die before we get back home, but it's worth the try.

Answering: "An Explorer, Researcher or other character motivated by discovery."
Visit Mochimanoban's Competition Page Check all other answers to this prompt Competition Homepage

Aw, lovely work, Mochi. I'm glad you've been able to give so much context and lore to a design I drummed up; it's cool to see someone take a blank slate and make something complex out of it.

Thank you so much for the drawings, I REALLY appreciate it! The art you made really gave me the motivation to continue this world, so I am eternally grateful ^-^

I love the style you use to write this, you really got Jerna's voice across really well :D And Chimera's drawing are super cute!

Thank you so much! Chimera is a very talented artist, as everyone knows ^-^

I like the friendly approachable style you have! Pulls the reader in... :-)

WE 2022 "Title" Finalists and NY Resolutions

Thank you! I am really enjoying the writing style of this world :)

This article has a lot of character! It's fun to have a character introduce themselves. I think my favourite touch is the "5'2 but spiritually 5'9".   The part about her fathers death stands out to me. She's so bubbly in the text, so it's interesting to see how she processes something so sad. I kind of get the sense of someone who isn't just exploring the world, but also on some level running away.   I would've appreciated a longer introduction. The world is called Jerna's diary, so I have a feeling there's some good context you can put there. I also think the final quote is somewhat superfluous.

I was curious to see who was that person that gave this world its name, and I'm not disappointed! A funny article with a lot of character that introduces the character beyond the words, very well done! Chimera's drawings do wonder at illustrating it too!