A thrill seaking speed junky and damn proud of it.   'Lightning' Lan Candur is half of a famous racing due in the ZaVida Mutuality. She and her partner, 'Red Racer' Reva get top billing and live a lavish life on the Zavi Station.
Lan was born with her trade mark lightning bolt stripes. Its unclear if this was an omen of things to come, or thier insperation.

Lan was obsessed with speed, heights, and danger from a young age. She started out as a Clockwork Courier for The Ring and from there discovered the thrill of going as fast as possible on a driver.   She was determined to join any racing circuit that would take her. But, being from the Border District, the only races she could get in on were the highly dangerous battle races held in the colossi infested outskirts of the city.   She loved the thrill, but keeping a racer in top shape is near impossible at her level without indebting yourself to the Border Cartel. So, she became a messenger and drug runner for Norah 'The Storm' Vrand to keep racing, and was often caught up in the backstabbing politics of the Border Cartel.   It was in the dangerous and cutthroat world of cartels and racing where she met Reva Kassian. Reva was new to the planet and needed help getting started in the racing league herself. After few drinks together Lan was drunk enough to let the stranger use her racing driver and was absolutely blown away by Reva's skill. Falling for her almost instantly, though she would not admit any attraction for many years to come.   Determaind to keep her new freind racing, Lan worked more dangerous jobs, dealing directly with pirates and situations she knew where likely to go south, to keep up with any repairs Reva might need. She did her best to keep from her friend were the money was coming from, though Reva heavily suspected.   It all came to a head when Boss Nora sent Lan to run an errand for her brother, Ivec. This was usually what happened to couriers that upset her. Not having much choice, Lan took the job, though Reva urged her to run away with her to the space stations instead.
It went as poorly as everyone expected, but somehow, Lan survived. She and Reva fled, as now they had two Carrel Bosses and a band of pirates after them. (How I imagine it went)
They managed to escape with the help of a Vondren Military Starrunner Captain. He had been interested in Reva prier to this meeting. He and Reva made a long term deal of some sort in exchange for helpign them escape the pirates.
He used Lan as bait to lure the pirates into a trap, then took the two to safety once the pirates had been delt with.   Reva became wildly popular in the ZaVida Mutuality racing circuts as the "Red Racer", and Lan backs her up as her partner "Lightning Lan". The two are now a couple and are living quite happily.

Racing partners and lovers, Reva and Lan have been through many hardships. Their passion for racing and love for each other has gotten them through it all. Still they run ever forward.

The thrill of speed and a competitive nature 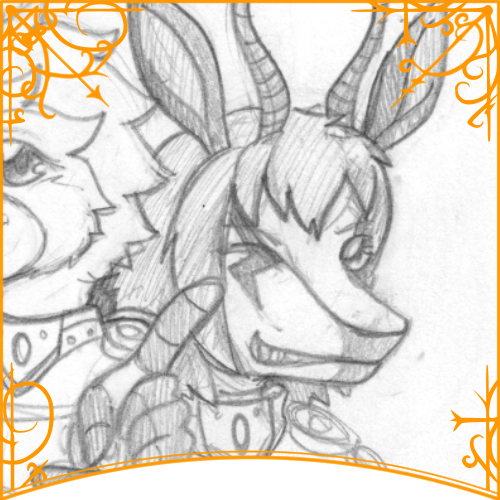 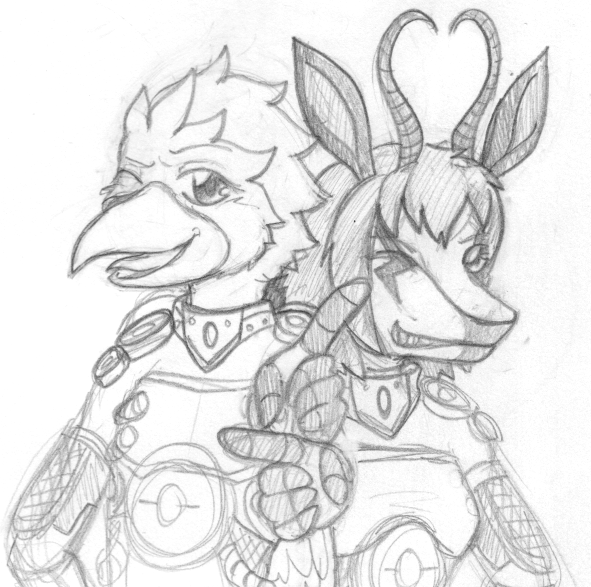 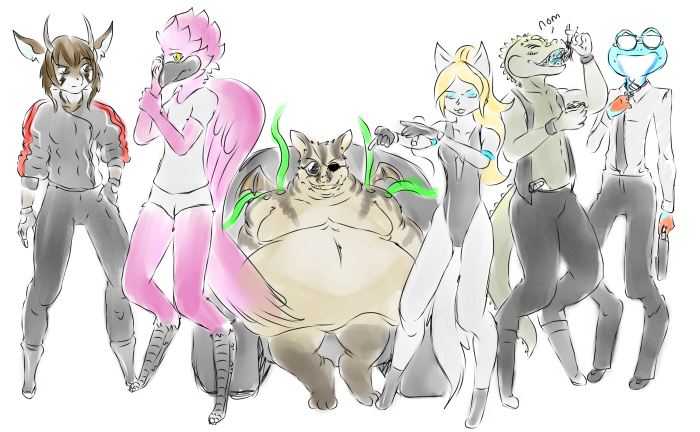 Silly Doodle: Into the Night

A silly doodle with characters dressed as the role they might play in the Into the Night Video   They were not made for the video, but when I saw it they slotted in so perfectly that I couldn't help myself. (though Ivec's looks are heavily inspired by the vid as his wasn't visually desined prior)