Aman and the Sacrifice

Aman and the Sacrifice is a story almost every nyr child is told at least once in their lives, as it retells the tale of how Aman ended up on their path not only to become a prophet to the people, but in the end even joined the the ranks of the gods. It is a story about questioning established rules and traditions, and about choosing one's own path, even if it's difficult to do so. Children are always encouraged to ask questions about the story and explain for themselves why Aman decided to leave and acted how they did.

The most popular version of the story goes as follows:   Everything begins at the temple of Panthil. Aman, young and a little naive still at the time being, is on their way to run an errand. They come from a small family living in simple circumstances, and Aman is working as the assistant of a bookmaker. Their employer had sent them to collect a batch of extraordinary ink he had ordered from a specialized vendor who happened to have her store near the temple. It was a day as every other really, but when Aman stepped out of the shop with the collected vials of ink, they heard a commotion from the direction of the temple. Aman was known for their curiosity... and simply couldn't help themself but take a short detour to see what all the fuss was about.   In front of the temple a crowd had gathered, yelling, arguing amongst each other, and on a pedestal in front of them stood the High Priest of Ayna talking down to them. Aman noticed that the majority of the people in the crowd were farmers and shepherds, and the dispute seemed to be between these two groups.   The year of this event had been unusually dry, and the crops of the farmers couldn't grow. Panthil's food reserves were still relatively well-filled, but if everything had to be used up now the winter would be hard. Some of the farmers argued even that the city had been growing a lot in the recent years and it might be that the reserves wouldn't be enough to feed everyone.   After listening to the conversations for a little while Aman realized what the gathering was about. The farmers demanded of the temple to perform a great sacrifice, to appease the god Aheir, Ayna's counterpart, who was seemingly angry at the mortals. If Aheir could be soothed, Ayna would send the farmers the much-needed rain for their crops. The priest had apparently decided that each of the shepherds present had to bring one of their most prized goats or cows to the temple, for the animals to be slaughtered - but the shepherds refused. This refusal is what had caused the commotion in the first place, but it seemed that the shepherds were tired of sacrificing their animals - their own livelyhoods - for the purpose of soothing the gods.   The High Priest was about to put down his foot and announce that the animals would be sacrificed no matter if their owners agreed or not, for the wellbeing of the city. But this is when Aman spoke up. Aman was a very tall person, flaming red hair definitely an eye-catcher wherever they walked. But they didn't falter or stutter, even when every single last one of the people present had turned around to stare at them in disbelief as they argued with the priest.   Aman felt with the shepherds and farmers alike - but in the end, why would the gods approve of a pointless sacrifice that risked the livelyhood of the shepherds to maybe save the livelyhood of the farmers. It was not like the gods would appear out of thin air and have a feast with the sacrificed animals. Their carcasses would be thrown away and left to rot. Aman had seen this happen many times before, and they were certain that there was no correlation between any sacrifices and the "signs" the priests had interpreted as the will of the gods being changed through the sacrifice. Aman believed that either the gods had no influence in this world at all, were merely watchers of the mortal's doings... or their influence was so great that no sacrifice in the world could change their minds, because they were working towards a bigger plan that was far beyond the understanding of the mortals. Aman said that, if the gods wanted Panthil to experience a famine, then the famine would happen. And if not, then it wouldn't, but sacrificing innocent living creatures in an attempt to bribe the gods would not make a change.   The priest was enraged about Aman's audacity to speak to him like they did. He called them a child, not knowing what they were doing or talking about, and simply due to their naivety the priest would not call the guards upon them to remove them from the temple grounds. Aman was not hurt by the priest's words, but instead felt immensely sorry for the shepherds and farmers. Aman felt that both groups had fallen victim to a destructive belief system that was far away from reality. They believed that the gods existed and had created this world, as nyr children were told from a young age. But Aman refused to believe that the gods were to be swayed with the barbaric slaughtering the priest was about to initiate.   Aman returned to their workplace, but they couldn't let go of the thoughts that something severly wrong was happening at the temple. They set out to speak to others about their theories about the gods, but due to their young age no-one seemed to be taking them seriously. Frustrated by their surroundings and disappointed by their hometown Aman eventually decided to leave Panthil and Maan Garth behind, going on their famous pilgrimage to study magic and meditation techniques, learn from different nyr tribes and the cultures across the oceans, in an attempt to get closer to the gods and understanding their will.   On the day that Aman left Maan Garth it rained, and they interpreted this as the first true sign of the gods telling them that they were on the right path.

Due to this story being set so far in the past, for the longest time it wasn't sure how much of it was actual truth or just hearsay. Hundreds of years after Aman had long ascended, during restoration work at the temple of Panthil, a scholar discovered old records that listed rituals performed and offerings given to the temple, along with some notes on special events or happenings. Shortly before a sacrifice ritual with the purpose of soothing the gods and praying for rain there is a mention of a commotion in front of the temple that comes very close to the description in the story, although Aman isn't mentioned by name and it's not clear, whether they really spoke up to the priest or only listened to the argument.   Aman's pilgrimage and their reasons for departure, a general dissatisfaction with the priesthood and religious exposition, are documented in Aman's many diaries and believed to be authentic.

The story first surfaced after Aman had already made a name for themself and was gathering students from all across Ivendarea who wanted to learn their ways and magic techniques. Either one of their students or someone not directly involved had asked Aman why they had chosen Maan Garth as their home and place to deepen their studies. This is when Aman revealed that they had been born and raised in Panthil, which had been widely unknown and caused a wave of surprise - as well as a new surge of questions about the early life of the lonely traveller Aman.

The overall strucutre of the story is always the same, the only thing that changes are details such as the purpose of the sacrifice ritual, the god the High Priest was speaking for, the amount of people present at the temple, and so on. There are for example versions of the story where Aman is in a one-on-one shouting duel with the High Priest, after coming to the temple on their own right before leaving Panthil. Something that also changes occasionally is Aman's profession at the time. Some claim them to be a mage's apprentice, others make them a simple fisher. In some rare versions Aman is the abandoned child of king Dartris and half-sibling of later king Davar, although this version is considered highly unlikely to be true.   The overall gist of the story is always the same though: it is difficult to walk one's own path and to speak up to injustice, but only by doing so one can reach greatness. 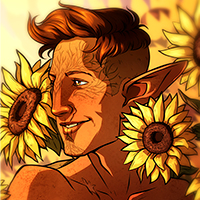 o.o aaahhh omg, thank you so much!! I'm a bit speechless now aahh this is awesome o.o