Primeval Goddess of the Sun, Light, and Summer

When people look up in the sky and see the blazing sun shining overhead, they think of Solarea. One of the oldest and widely-worshipped Gods in Itaxia, she watches over all the denizens of the world while the sun shines, warming the people below and providing them with good health. Nowadays, she presents herself as a nurturing, shining beacon, though this wasn't always the case; once upon a time, she was a violent, bloodthirsty warrior famous for cutting blazing swathes across the land.   However, she has something of a heated rivalry with her twin, Lunara, as the two feud as to who does the best job of lighting up the sky. As far as Solarea is concerned, she does far better with only one light than her sister does with two, and people are do not flee inside when the sun comes out as they doo when the moons rise and darkness consumes the land.

Said to have been created by Solarea herself during the War of the Gods, Supernova was a blade wielded by Solarea's chosen champion of that time, Sana Sarsson. According to legends, the gold and white blade shined like a beacon and contained the raw power of the sun itself, turning it into a terrifying weapon that could cut through most things as if they were paper.

The Sunlit Scriptures - Older books from ages past, said to have been touched by the hands of Solarea herself. The scriptures outline all the doctrines for her faithful, and methods for rooting out corruption.

A blazing golden sun floating atop a mountain.

Bring the light of the sun where darkness dwells; be kind, compassionate, and strong

Fire and light are the great purifier. Use both to cleanse in my name.

Relieve the suffering of the innocent wherever you can.

Highsummer - the Longest Day of the year, where the sun shines brightest and longest.

To shine above the world and guide its people

Solarea is a towering humanoid woman, dressed in a set of golden armour that shines as bright as the sun and seems to exude white-hot flames. In one hand she holds a massive sword, the blade of which is made of pure sunlight. Fitting her legacy as being the Mother of All Angels, Solarea is often depicted with a pair of massive, glowing white wings that appear to be made of fire.

During the War of the Dawn - a time before mortals, when the Primordials still walked the world - the Gods came to a realisation: they were vastly outnumbered by the Titans, who had propagated the land for eons before the Founders made their appearance. Solarea, considering for a moment, pulled a mote of light from herself and shaped it into a new form. This being looked like Solarea herself, at a glance: a humanoid figure surrounded by a corona of light, with large wings spread from their back.   This was the first of the Angels, celestial beings made from shards of the essence of Gods themselves who would serve as their agents. While the other Gods would create their own angels in their image, Solarea would be given the moniker of "Mother of Angels".

Solarea has always been a passionate and fiery figure, but prior to the end of the War of the Gods that fiery temper lead her to become a bloodthirsty warrior prone to jumping into battle at the earliest opportunity and carving waves of destruction across the world. Since the War of the Gods, she has made an effort to temper this aspect of herself and become a more even-tempered being.

Solarea is a God known for her deep passion and fiery temper. Clerics who have communed with Solarea compare her in equal parts to a caring mother and a passionate fighter, and have described her as being strong of mind and voice, and incredibly commanding.   Perhaps the most well-known characteristic of Solarea is her neverending feud with her sister, Lunara, the Goddess of the Moons. The core of their feud is simple: which of the two does a better job of lighting the world, Solarea with her sun or Lunara with her moons. A definitive answer has never really been found, at least not between the two, but Solarea being the way she is means that she is more often than not the instigator of the debate.   Solarea had a reputation for being a passionate and almost crazed fighter. If there was ever an opportunity to engage in a fight, Solarea would be the first of her siblings to do so, to the point that other Gods would have to physically hold her back to prevent her from doing so. However, this nature manifested in an aspect known by some as the "the Light of Destruction", where her passion for fighting would reach a point where she would be entirely engrossed in a fight, not caring for the destruction she would cause.   After the War of the Gods, she became notably much more even-tempered. While she is still passionate and fiery, and always raring to get involved in a fight, her infamous violent streak has not been present for a long time. Do not make the mistake of assuming she has lost her edge, however; that violent nature has refined itself into an unbreakable will and blazing determination, and Solarea can still let the Light of Destruction loose if called.

Among the Founder Gods, Solarea is easily the most widely-worshipped and thus the most powerful. She is thus considered to be the closest thing to a leader among the Founders, often being the final word in any decisions that they make as a group; she is also the most active, being the only one of the Founders who acts first as opposed to waiting for events to react to.

Solarea is the most widely-worshipped of the Primeval Gods, with many praying to her for bountiful harvests, warm days or even just the light of the sun itself.   Solarea is a Goddess that does not demand much; merely acknowledging her presence and the gift of sunlight is enough. However, worshippers of Solarea tend to have something of a rivalry with worshippers of Lunara, which has occasionally lead to followers of the two Goddesses to come to blows with each other.    One of the few things that Solarea does ask of her followers is to be vigilant in striking down evil wherever it may dwell; fiends, undead, and aberrations are said to be sworn enemies of Itaxia, and Solarea asks that her followers strike them down; Solarea has a noted disdain for the Demons of Asmodeus. However, Solarea and her clergy do not have the same blanket hatred of undead that the Raven Queen does, and is more than willing to allow them into her fold if they prove themselves.   Some devotees of Solarea venerate Solarea as a Goddess of War, naming themselves the Swords of the Sun; they dress themselves in brilliant golden armour and blazing swords in imitation of her, and throw themselves into battles at the earliest opportunity. Among her worshippers, they are the most feverish when it comes to striking down evil, though this aggressive mindset has lead many to label them as dangerous.   Solarea's faithful consistently dress themselves in golden and white robes with adornments resembling the shape of the sun or its rays, with head priests wearing a golden crown topped by a golden sunburst. The more martially-inclined of her followers are sent out to root out corruption in the world, to "cleanse it with light", as they would put it; they commonly wield large longswords, said to harness the rays of the sun itself. Almost all devout followers of Solarea awaken at dawn to give thanks and morning prayers to her.

Solarea is said to be the eldest sister of the Founders, the Gods that were said to have shaped Itaxia itself. She is said to be the oldest among them as she was given the concept of light itself to bear, though Lunara would argue that as they were twins they should both hold that mantle.   The rest of the Founders, being largely - though not entirely - more passive in their endeavors, will often defer to Solarea's leadership and guidance in times of crisis due to her militant nature.

Towards Solarea, The Sunlit Queen

Solarea and Lunara have had a rivalry with each other since the moment they were born. They love each other, but also feud on a constant basic like any siblings do. This feud stems from the belief that the other does a worse job at lighting the world than they do.   Solarea swears by the fact that her sun lights the world and brings it great warmth, and that people do not fear the sun coming out (except for the Drow, but Solarea conveniently forgets that fact).   Lunara's claim is that her lights guided the mortal races through the unsafe nights, guarding them from the beings that might mean them harm. 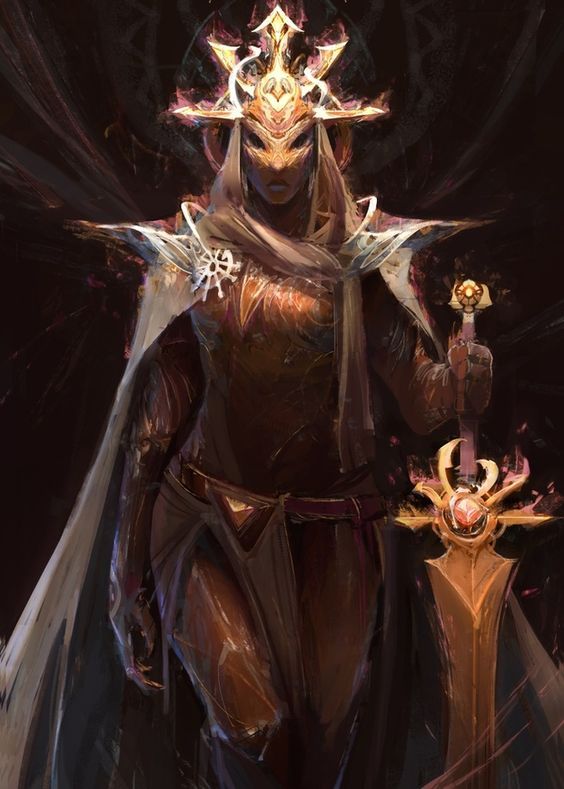 Primeval Goddess of the Moons, Darkness, and Winter

The legendary weapon forged from the light of Solarea