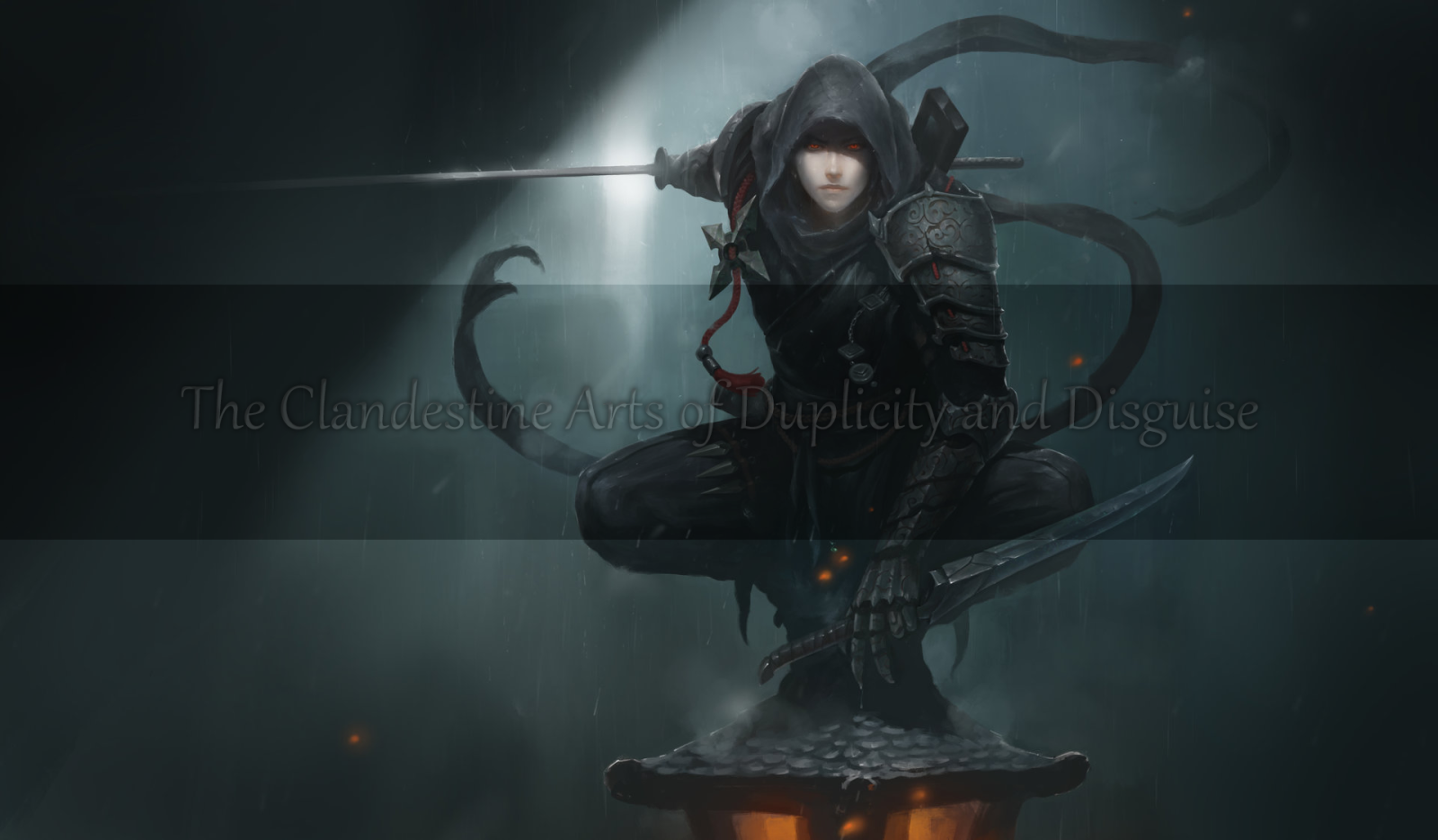 The Clandestine Arts of Duplicity and Disguise

Every rogue, vigilante, sneakthief or bandit worth their salt knows the Clandestine Arts by heart. Their first forays into the underworld are often clumsy and noticeable, and none in the underbelly will tolerate that for long. Either they obtain a copy of the Clandestine Arts - usually slipped into their pockets as they try desperately to blend in - or they end up dead, their missteps into the world of crime either provoking unwanted attention from more dangerous members of the underworld, or from ever-vigilant law enforcement.   Of course, those not welcome in the shadowy world of crime and deception also rely on the Clandestine Arts. It provides a doorway into the minds of criminals and unlocks their tricks, and quite a few have been caught by not heeding the warnings from both the book and their companions. A lack of creativity and ambition will be the eventual end to any criminal, no matter their scale. Simply using the book's tactics as written will never work for an extensive amount of time.

The Clandestine Arts is, simply put, a guide to all the skills a criminal might need. From dressing up as the opposite sex to making a clean getaway after an assassination, it covers everything one could imagine - which is rather surprising, considering its smaller size. It seems to have latent magical properties, as it can appear quite differently depending on the method it is obtained and the current time - a claim that can't be explained by the existence of updated versions, as preserved copies from centuries ago seem to contain the same updated copies as a 'new' book.   It seems to exist for the sole purpose of encouraging criminal activity to be more risky, more creative, and far more successful. Since its appearance, criminals have been inspired to take on tasks they might not have, and nobles have had to be more careful in their actions. The recent assassinations of the heirs to the Aletheian Empire were only more evidence of this bravery in action; the assassins supposedly used textbook Clandestine Arts techniques in their murder.

Being found in possession of the Clandestine Arts is always suspicious. Most law enforcement agents will question the book's owner on its presence before passing a judgement, as due to its age and valuable tactics, it is possible for its presence to be entirely legitimate. Scholars wishing to study the text or fellow lawful members of society (such as paladins and inquisitors), for instance, might possess it in order to use the book against the criminals it aims to help.   However, some countries do outright forbid the book unless express permission is given. The Medimian Empire is one such nation: being found with the Clandestine Arts on their territory is cause for immediate arrest. Those found guilty of not possessing a permit are usually sentenced to hard labour, or in certain areas of their Empire, are simply executed in public. Similarly, the Takawaokan nation of Vevela is heavily against the book's tempting influences, and will punish those smuggling it in with dark curses and exile. 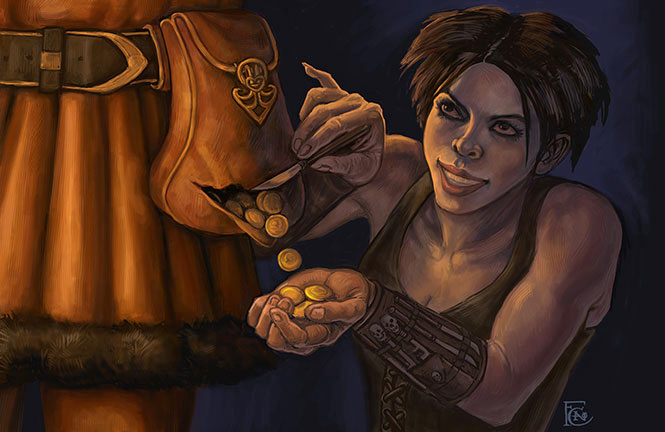 Pickpocket by Felicia Cano
Regardless of the circumstances of the book's existence, it has had a significant effect on the world's shadier elements. After it began finding its ways into the pockets of rogues worldwide, Istralar as a whole began to experience spikes of largely successful crimes. Mages began to find ways to profit through providing wands and potions of invisibility, teleportation and disguise, and governments were forced to adjust their methods for dealing with crime.   Famously, the Skyggestalkers used the book's instruction to break into the inner sanctum of the Witch-Mother Louhi Talviäiti, located deep beneath Kyöpelinvuori. Using the book's techniques, they secured the help of an exiled witch to provide them with disguises and potions, and convinced Louhi and her clan that they had travelled there to study under their tutelage. As soon as Louhi's guard lapsed (a matter helped by their extensive use of sweet-talking and alcohol), they struck, stealing the Talvianen Ritual Book and their employer's wedding ring from the inner sanctum. Whilst this act was not without retribution (as the furious witches would take vengeance on the foolish employer, a local dwarf clan), it became a shining example of just how effective the Clandestine Arts were. Witches had always been known for their shrewd intuition and strong protections, and these had been easily bypassed by the Arts in practice.   Whilst none were able to repeat that feat in particular, despite trying, news of the Talvianen clan's 'fall' spread rapidly - and with it, news of the book. Traces of criminal activity inspired by the Clandestine Arts have been found on all four known continents, and some conspiracy theories explain that the fifth - Kudara - is using the Clandestine Arts to remain concealed. This is, of course, a ridiculous theory - a continent cannot easily hide, nor remain disguised, using the methods the Book explains. This does not stop the conspiracy theorists.

None are entirely certain when the book was written - or even, who it was written by. Copies ending up in bookstores or libraries seem to end up with their text magically altered, indicating some more sinister power, but even the original versions don't list a name - each copy is signed with the stylised image of a dagger.   The first signs of the book's appearance were around two thousand years ago, marking a drastic shift in the behaviours of criminals worldwide. It has seemingly stayed updated with the latest methods since then, ensuring all shadier elements keep their copies safe and reference them often, and some have begun to espouse that even owning a copy of the Clandestine Arts provides some element of luck to its bearer.   Theories of the book's author are varied. The most popular ideas are that the author was an incredibly powerful magical assassin who imbued the copies with his power upon death, that the copies trap the souls of criminals after death to improve their advice, or that some divine element - if not one of the Chaotic deities, perhaps a demon lord, or one of the Eldest - is behind the book's creation. As it stands, it is currently highly unlikely that the true author will ever be revealed.

Society's regular elements - the craftsmen, tradesmen, farmers, and nobles - don't tend to know much about the Clandestine Arts. Its name inspires slight fear and wariness, but due to its relative scarcity, they usually aren't aware of the extent of its contents. Still, showing off your copy is generally grounds for being kicked out of businesses or for being arrested.

The Clandestine Arts of Duplicity and Disguise

Greetings, my dearest reader.   I'm sure you might agree that I can't simply allow secrets to flow freely into forums where they might be misused - oh, you thought this was a book for criminals? Never fear. It is.   If you wish to read the true contents of the Clandestine Arts of Duplicity and Disguise, you must find a copy yourself. Perhaps you might seek it out in the darkest corners of the blackest nights. Perhaps you might take it upon yourself to search the pockets of your shady fellows, risking the bite of a knife all the same. Or perhaps you might bargain with persons unknown for a copy, ever aware of what it indicates about yourself.   Without risk, there can be no reward. Seek out my work, and it shall, in itself, be your reward. Tarry not in the light, be swift on your feet, and you may have a chance in the harsh world lying just out of your reach.   [The page is signed with a stylised dagger.] 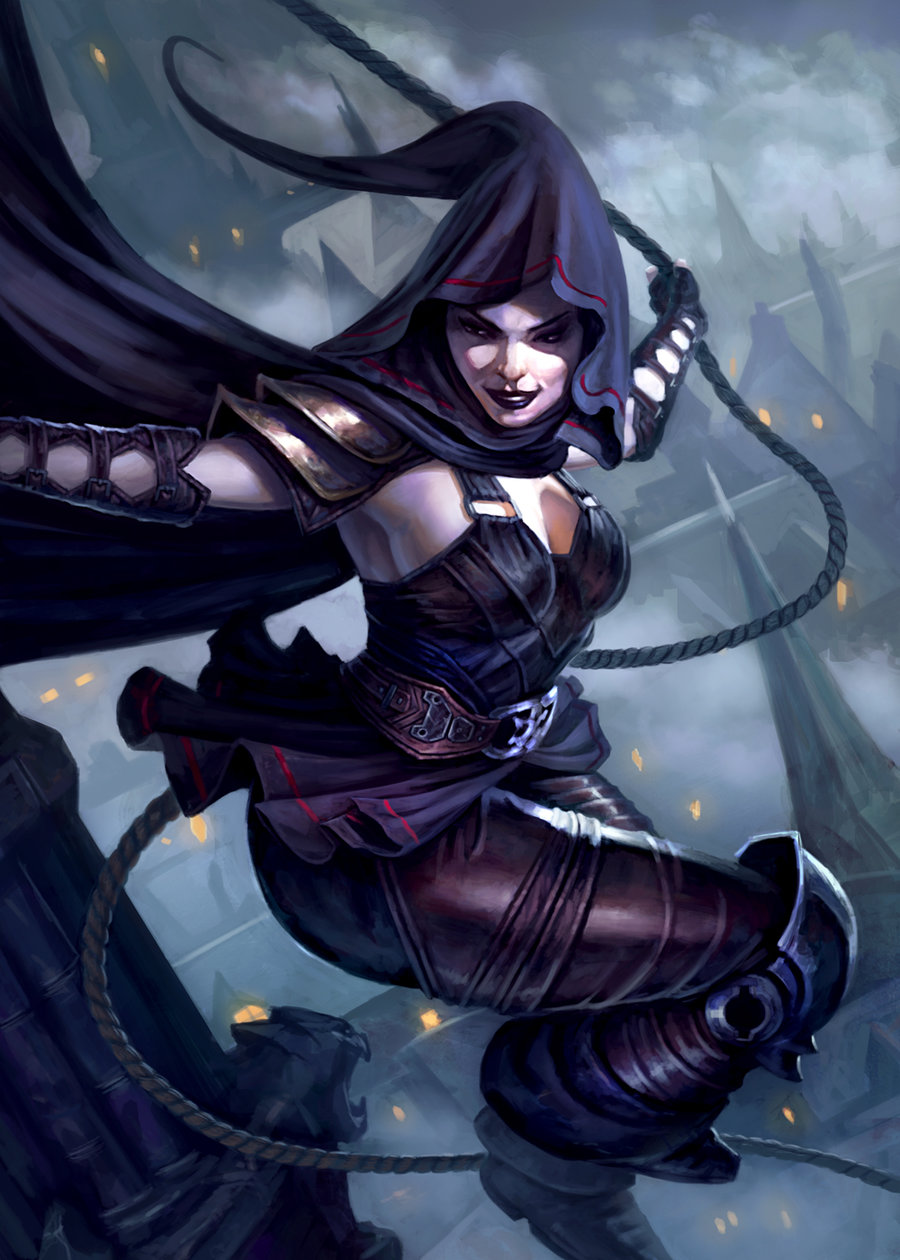 This world uses trademarks and/or copyrights owned by Paizo Inc., which are used under Paizo's Community Use Policy. We are expressly prohibited from charging you to use or access this content. This world is not published, endorsed, or specifically approved by Paizo Inc. For more information about Paizo's Community Use Policy, please visit paizo.com/communityuse. For more information about Paizo Inc. and Paizo products, please visit paizo.com.
Cover image: Night Stalker by Lee Kent

Guide to criminality? That's convenient, great idea! Are there any people supposing that in truth a secret organization is using the book to show how to liquidate or rob people they don't like? Kind of a conspiracy theory. Also, have any scholar ever tried to just keep several books open on the different pages and look when it'll change the text?

There's a bit of an overuse of commas that you might want to do a pass on. Creating some more spacing between the header and the text above might make them look a bit better.   Personally, I would consider rewriting this bit: "which is rather surprising" to something like despite its small side or for such a slender volume or something like that.   Does it come in different editions? Or have significant changes as it gets translated between languages (particularly with cultural differences, such as between elven and dwarf) or has it stayed pretty much the same? Curious minds inquire!

Damn Han, this article is so damn sexy. "Theories of the book's author are varied" couldn't that just be "author vary" I think it reads a bit better