Champions of the Divine

The following file has been sourced from the Archives by Starseeker request. It has been adjusted for outside perusal by ███ ████ ████. Further sharing of this file outside the organisation will result in memory alteration for security purposes.
— Archivist Connla of the Shade

Whilst the universe's many deities have near-boundless powers, there are still actions each must not take, limits that they must never cross. As decided through ancient divine law, one of these limits regards their power over the mortal realm. To prevent full-scale divine war between opposing deities, a threat that could easily result in the death of multiple gods and trillions of mortals, direct deific intervention in the mortal realms is strictly forbidden.   It is only through the creation of viable alternatives that this law is upheld by all. Whilst deities cannot risk angering one another to the point of direct assaults, the use of their faithful as chess-pieces has long been considered an acceptable manner of continuing arguments, and many mortal religious crusades have been spurred by the whispers of their divine patrons.   Another alternative available is to use a proxy to carry out their will. Each deity often also employs a herald and multiple servitors for this purpose. These are powerful outsiders that may act on direct behalf of their lord, usually sent as messengers or as aid in times of great need. Their use is incredibly rare, as they require express permission to act, and are still bound by many divine laws - even if they are agents of chaos   Deities may also choose to manifest, but this is incredibly dangerous. Direct manifestation risks breaking the covenants each deity holds, and manifestations only hold a fragment of each deity's power. As such, this allows them to be defeated. Whilst the defeat has little effect on a true god, the impact on their faithful cannot be measured. 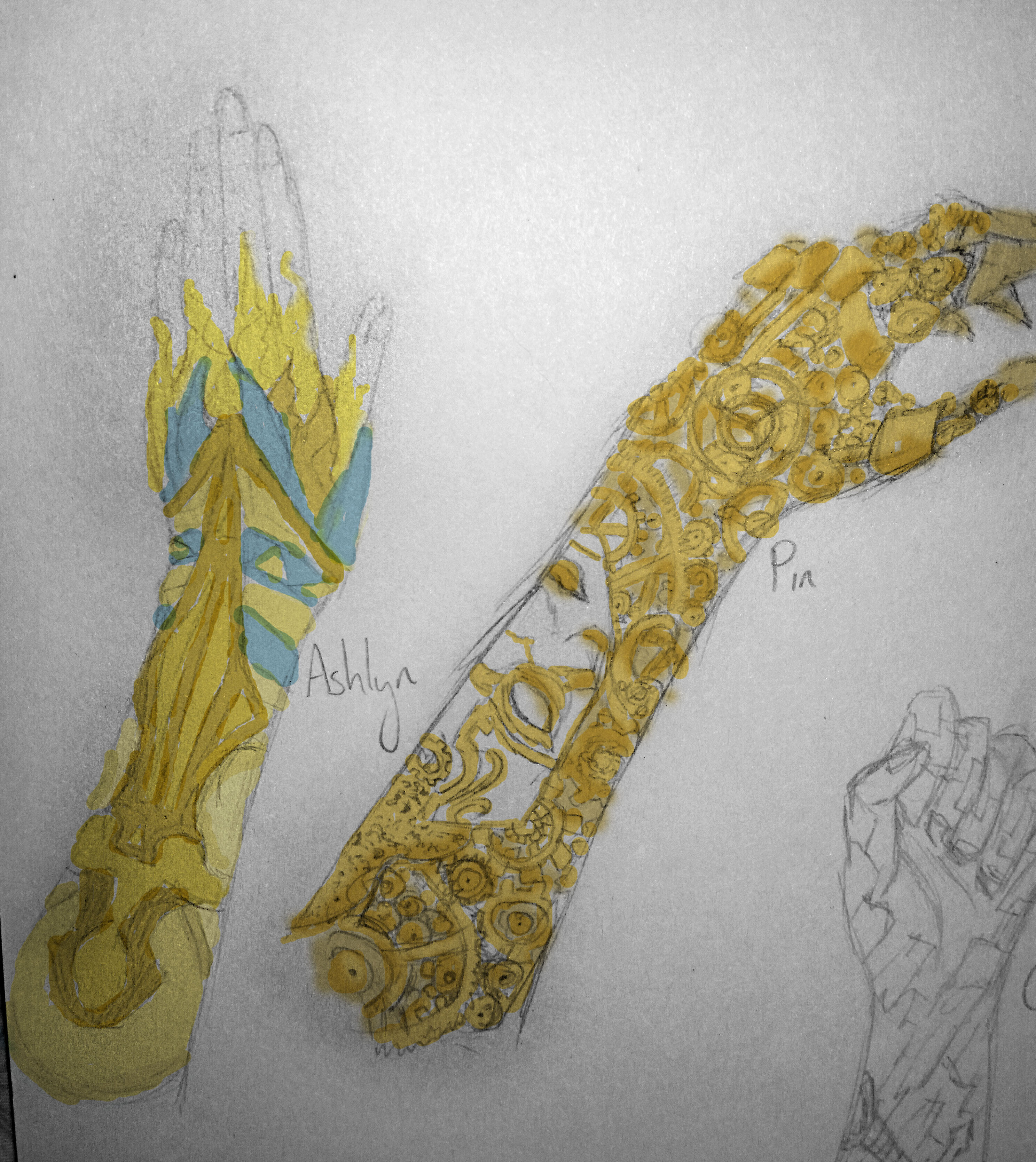 Champions of Sarenrae & Brigh by Hanhula
Tattoos
Champions bear ever-growing tattoos formed from the symbols of their deities.

The laws binding deities can be circumvented entirely by using a method only discovered in the first War of the Heavens. Since mortals first felt the influence of the divine, all deities have been able to grant their faithful some amount of power. Paladins, clerics, warpriests, inquisitors, oracles, shamans - each receives their strength directly from a divine patron, though each must hone it through their own might.   As mentioned, it was during the War that certain deities realised that select mortals, if they were in some way faithful to a god, could be imbued with the tiniest fraction of that god's divine will. It would not bind the mortal to do their bidding, nor would it instantly grant them higher power, but as the mortal trained, their deity would be able to grant them more. Over time, this allowed mortals to become near-avatars of their deity, able to grant their lord access to their mind, body and soul and in turn, wielding true deific might. These mortals have come to be known as Champions, the closest mortal equivalent to Divine Heralds.

Each deity may only ever have one Champion, and vice versa for a mortal. However, a deity may not claim a mortal that they do not have some sort of connection with, and lesser gods (also known as 'demigods') - such as demon lords, empyreal lords, whore queens, or fey Eldest - may have their claims overruled by a true God or Goddess at any time (provided that the Champion in question has some tie to them, such as familial history, racial heritage, or clerical worship). If a lesser god has their claim overruled, the backlash of power can prove incredibly painful for them, and on rare occasions can result in a total loss of that divine energy to the intercepting God. To that end, lesser gods are typically very careful in choosing their champions, though many good-aligned deities will at least grant the lesser deity the option to surrender their claim willingly to avoid the danger.   Assuming these two prerequisites are fulfilled, the deity must then shape the power they will bestow upon the mortal, and gift it to them in the form of their holy symbol. For the occasional deity with multiple symbols (such as one worshipped by different areas as slightly different gods), the most appropriate symbol for that specific mortal is chosen. The symbol is etched in a manner of the deity's choosing onto the mortal's arm, and is usually followed up by a dream, vision or whisper from the deity explaining the purpose for which they were selected. As the mortal bonds more with the divine power gifted to them, this tattoo will expand in form - always mimicking the divine symbol in some way - across their body, usually leaving the face and chest somewhat clear.

The Powers of a Champion

As every deity's power differs, so does that of their Champions. No two Champions will ever share the exact same powers, even if they share a patron (meaning they wouldn't have lived at the same time). In addition, powers may change over time, growing stronger or even changing purpose entirely. This can be particularly challenging for fledgling Champions, especially if they are without a guide of any sort. However, all granted powers will derive from their patron's.   As an example, Iomedae is the goddess of honour, valour, justice, and rulership. Her domains are Glory, Good, Law, Sun and War, and her subdomains are Archon, Day, Duels, Heroism, Honour (Judgement), Light (Redemption & Revelation), and Tactics. To this end, a Champion of Iomedae might be able to channel the power of the Glory domain into opening up an interdimensional Gate to draw forth backup in a fight, or might be able to channel War and grant those around her increased damage ability. The champion's powers will come as a result of what is most useful to them, originally, and over time will become easier for them to wield - they may even receive instruction on the exact nature of certain facets of their power.   It is common for Champions to seek out one another, despite their differing deities, if their causes align. More experienced Champions will have some knowledge of the process to make it far less terrifying, and acting together lessens the chances of failure. However, as Champions are still an extremely rare phenomenon and are not usually chosen en-masse, it is most likely that the Champion will fail in their search for another and be forced to learn alone. Some have documented the process, but these journals have either been lost to time, or are held as closely-kept secrets within religious sects or countries.   It must be noted that no power comes without cost. Whilst deities may often choose to bear the cost for their Champions, this is not always possible. Using their deific powers can result in physical exhaustion, trauma, or corruption; mental exhaustion, trauma, or other development of mental disorder; and/or magical backlash, enchantment, or curse.

Champions of the Past, Present and Future

The appearance of a Champion is incredibly rare, as mentioned above. Across history, they have only appeared either when their deity feels the need to intervene in a more direct manner, or when larger conflicts have erupted in the universe. For example, Verti Xi'corie was a paladin of Alseta who became her Champion after discussion between the entire Elven Pantheon, for the express purpose of rescuing the elven race from extinction.   Their purposes have not always been virtuous, however. Kostchtchie once selected a Champion to rampage through Iskaldhal, warping his human warpriest into a frost giant monstrosity that rampaged through the icy north. Before being stopped by the combined power of the witch-queens, the dwarven population and a local dragon, the Champion successfully wiped out a number of witch-cities, tribal communities and early dwarven civilisations - a feat that was said to have played a significant role in the decision of the dwarves to move their cities underground.   As more Champions are discovered, their legends shall be written here.

Multiple Champions have been selected during the past names. Their names and deities will be recorded here.

Following the trend, further champions are expected to emerge over the next few years as the as-yet-unnamed event unfolds. Many major deities, such as Torag, Shelyn, Lamashtu, and Irori, have yet to select representative champions despite being heavily worshipped. As Sarenrae, Desna, Nethys, Gozreh and Gorum have all become involved, it is extremely likely that the other major Western gods will join them in some manner.   The involvement of the demon lords Shax and Andirifkhu and fey Eldest Magdh suggest that the events unfolding have significance across multiple planes across both the Inner and Outer Spheres. As those chosen seem to have some involvement with the Lost Ones with the possible exception of Talindë Ae'tharis, it is presumed to also have a connection to the Shards of the Void that make up the group's primary objective.
Informative Documents

This world uses trademarks and/or copyrights owned by Paizo Inc., which are used under Paizo's Community Use Policy. We are expressly prohibited from charging you to use or access this content. This world is not published, endorsed, or specifically approved by Paizo Inc. For more information about Paizo's Community Use Policy, please visit paizo.com/communityuse. For more information about Paizo Inc. and Paizo products, please visit paizo.com.
Cover image: Champions by edit by Hanhula
This article has no secrets.
Article template
Generic article
World
Istralar
campaigns
Beyond the Mirrors: The Saga of the Lost Ones