The Kingslayer Rebellion took place from 792 to 793 I.R. within the borders of the Kingdom of Brisland. In a failed attempt at a coup, the child-king Miles Leopold was murdered in his sleep by agents of his uncle, Pavish Leopold. The failure to also assassinate his other uncle - Francis Leopold I - lead to the outbreak of the war. As the first and only civil war to take place since the founding of the Kingdom, the Kingslayer Rebellion marks a turning point in the history of Brisland.


Shall we stand idly by as men murder children in their sleep? Shall we allow the craven to take the reigns of the Kingdom and steer it to ruin? If you say nay, then stand by me! We will bring retribution upon those who will steal that which is by right of law beholden to another. From a speech given by Francis Leopold I to a council of lords as he mustered his army. 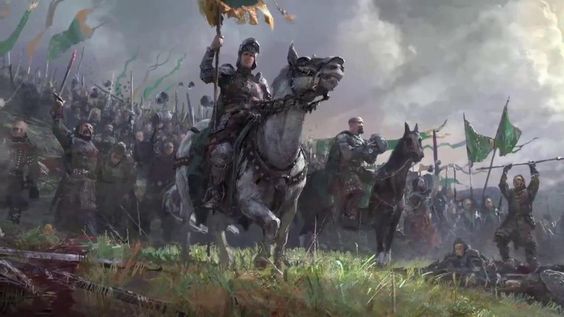 Upon the death of Rikard Leopold, his only son Miles ascended to the throne. Miles was only eight years old at the time. Rikard had two surviving brothers; Francis Leopold and Pavish Leopold, the youngest of the three. Francis was named regent and was to administer to the affairs of the kingdom until Miles came of age. Pavish - then duke of Northampton - saw this as an opportunity to take the throne for himself, and launched a plot to have both his nephew and his brother killed. While Miles was stabbed to death in his sleep, the attempt on Francis' life failed. Upon learning of the plot from the would-be assassin, Francis declared his brother a traitor to the crown and ordered his arrest. Pavis fled to Northampton, where he raised his armies from among his personal troops and the lords who had sworn fealty to him.


Over the course of almost half a year, several forces of the rebels and the loyalists met in the field. Gerald's Crossing was involved in a minor skirmish, but otherwise much of the fighting was kept to the open to prevent collateral damage in both lives and property. The lines of battle wavered little during the course of several months as both forces pushed to gain territory - the rebels attempting to advance upon Brisburgh and the loyalists pushing for Northampton. Finally, the forces of Prince Francis Leopold broke the stalemate at the Battle of Dover's Ford and afterwards drove the rebels back to Northampton and besieged the city. Pavish and his own son, Nathan, disappeared during the siege. Shortly after, the rebel army surrendered unconditionally to the loyalists.

Pavish Leopold and his son Nathan fled from the siege of Northampton, taking refuge in the Principality of Remaria. Nathan's surname was changed to hide his identity, and his own son still lives in the neighboring nation to this day.   Francis Leopold I - being next in line for the throne of the Kingdom of Brisland after his nephew's murder - is crowned king of Brisland and named Duke of Brisburgh. His grandson - Francis Leopold III - is currently the King of Brisland as of the year 850 I.R.

The people of the Northampton Duchy feel a certain detachment from the King, far away in Brisburgh. The war is still fresh in many minds, and although Francis Leopold I took pains not to affect the common people there is still a sense of resentment regarding troops marching across their lands and doing battle so close to their homes. The feeling of mistrust and disloyalty to the crown has lead to a culture of quiet resentment, diminished productivity in official projects such as the royal mines in the Pinecrest Mountains, and a general ambivalence of the people towards their monarch in the best case. This situation has been recently exasperated by the reign of Duke Faustus Leopold, the King's Uncle, who has put into place harsh programs to increase the Duchy's productivity and tax-collection efficienty.

In Remaria, Nathan Leopold's name was changed to Nathan Bargast. He later married Glenda Verhest, daughter of the Count of Borvalem, Remaria, in 806 I.R. The count died without a male heir, and Nathan took over the title by right of marriage in 813 I.R. His own son, Jocham Bargas, inherited the title of Count of Borvalem in 836 I.R. and still holds this position in 850 I.R. As a direct descendant of King Rikard Leopold, he or his descendants could possibly contest right to the throne of Brisland. His true identity is still a close-held secret known only to a few trusted acquaintances. The true fate of Pavish and his heirs remains a mystery within the borders of Brisland.
Conflict Type
War
Start Date
792
Ending Date
793

Conflict Result
The loyalist army under command of Prince Francis Leopold I forced the rebel army to surrender.

The Battle of Dover's Ford


While the stalemate at Gerald's Crossing saw forces of both the Rebels and the Loyalists staring each other down over several hundred yards of open plains, Pavish Leopold saw that he needed one final push to break the Loyalist lines so that he could march on Brisburgh. Instructing over half his army to march across the fields to the west of Gerald's Crossing under the cover of night, he intended to cross the River Brist at a small village called Dover's Ford. Scouts from the loyalist army spotted the column marching through the night and reported back to the Prince. Shifting his own forces to the ford, he laid in wait with lines of archers hiding in the trees. As the rebel forces bunched up in a tight column to ford the river, the loyalist archers opened up with a hail of arrows that decimated the rebel army. Forces from Riverton, held in reserve to the south, then chased down the fleeing survivors. Pavish lost almost half of his soldiers in one morning.