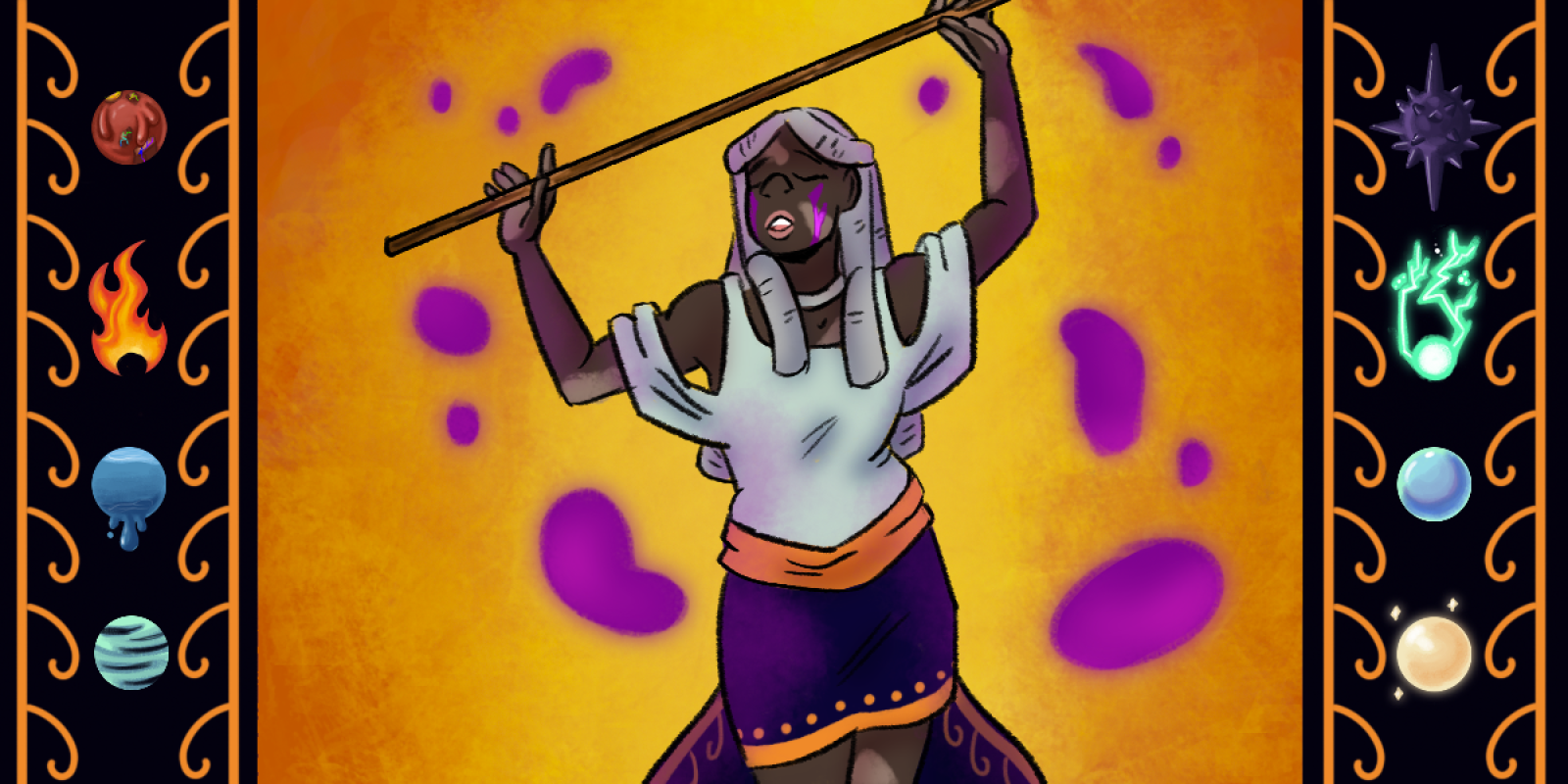 The Fabled Power of Desiree Bentley

Legend tells of a woman with magic so powerful that she was considered the goddess Devishtari's vessel: a way for the mother goddess to come back to her children and observe the world she'd made and left alone for eons. However, the descriptions of dark skin was a far cry from the magnificent nebulae that usually ran across the Goddess' form and many beings compared her off-white dreadlocks in magnificent curls to the mists of creation themselves; it made sense her empowering form would be diminished in a mortal shell. The human went by the name Desiree Bentley, and she claimed to have come from a small village named Haven, in the east. Desiree grew to display great feats of power as she traveled across Isidoro, urged by a thirst for knowledge.   As she traveled, so did tales of her prowess: harsh lightning strikes to scare away threats from a village would turn to soft rains to help farmers through droughts...Amazing acts of healing, and emotional magic. She simply asked many who saw her for a roof over her head, and to be taught any spells they knew that she hadn't come across before. She visited many fae-- for knowledge of carefully crafting spells with dual meanings, nagas for their affinity to shift the earth beneath their scales... and to many's shock, bloodkeepers-- it was baffling to many, considering how the Bloodkeeper-Human War was fresh in the populaces' minds.   She even traveled with a handful across Isidoro, claiming them to be great allies and teachers, teaching her to weave darkness like silk. They protected her, even though many said she needed no such thing. Unfortunately, her knowledge, power and standing as symbol of religious sway could go without protest for so long.   Some say that the god Devaziti, the God of Lethargy and Destruction became aware of the mortal's presence, and sought to bring balance back to the realm; that someone with that much power, someone housing Devishtari should not exist. Others think it was merely jealousy. Regardless, it is believed he sent a sickness to destroy the human vessel, so that Devishtari would be forced to only observe once more.   Desiree, frail with sickness managed to coalesce her magic into tangible containers of crystals: seven vessels with fractions of her power in each, capable of granting the holder immense power. When her body left the mortal coil, her magic stayed behind. It is said that the evening of her passing, the sky was alight with ribbons of colourful light, her mana dispersing back into the world.

Desiree was a gifted human, able to weave spells with the greatest of ease. She traveled Isidoro with an entourage of bloodkeepers, displaying incredible feats of magic and learning spells most humans would take years upon years to learn, in months. This adeptness was unheard of to many species in Isidoro, especially humans, who typically needed many years of study and Magic Enhancing Items for spells Desiree could do without breaking a sweat.   Rumours began to rise that her skill was due to her being the mortal vessel the goddess Devishtari, come to finally look over her children, since this level of control over the elements, as well as general magic was seemingly so far above her species.

A table showcasing the species of Isidoro and their skill level with the elements along with their born alignment. The following indicates the difficulty for each species to learn the elements. 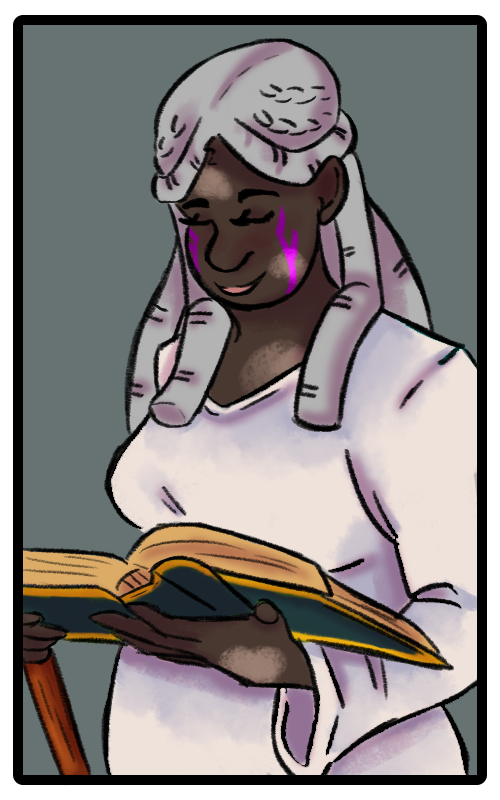 The Woman Behind it All

Desiree Bentley has plenty of rumours surrounding her life. Myths and fables are intermingled with her actual life's story, and some stories involving her during her travels seem to be too incredible to be true.   The facts that people can agree on: Desiree was a plain human. She lived in Haven. She travelled the world, advancing her magical skill. She died of a strange sickness while in the rainforests of Juptmou.   Most of her extended family and her village know more, along with the bloodkeepers she had travelled with. After many years of fighting public opinion, they pulled back, allowing the rumours to ebb and flow with time.

From Left to Right: Euthymus, Psyche, Themis, Althea, Polloi, Cyrus and Seraphina
The true name of these gemstones are unknown, but now are called Desiree's Stones. A more commonly used name is Desire Stones, though that is mostly outside of Haven. These stones which are part of the myth, do exist in person, though recently Euthymus has gone missing from the memorial temple within Haven. They are heavily protected and a strong symbol of her bloodline, and the loss of one is a great sadness to their village.


Desiree's village and those she knew closely often celebrate the day of her passing, drinking and retelling tales, reminiscing on the good she'd done within the world aside from her magical skill. As years have passed, the amount of people grieving have lessened, mostly due to passing away. The largest celebrations come from her village, and the main bloodkeeper tribes she'd originally learned the art of darkness magic from. 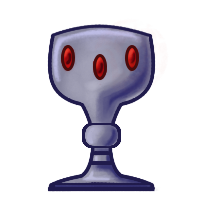 "She was given a family marking from one of our clan members," She gestured to a family to the left of the podium she stood on. "She was a good person. Kind, even after the war. She gave us hope for a better future. We celebrate the day she came to us, and the day she left. We drink in her honor." The bloodkeeper lifted her chalice, her hair grey and her fur darkened. She smiled softly to the crowd in front of her. "Some of you are young, and don't know her story. Tonight, you learn. To clan member Desiree Bentley!"

A collection of seven gemstones imbued with magic.

"[...]For all intents and purposes, Desiree Bentley is capable of doing magic at a level no one has ever seen previously. She simply does things that, if not for first-person accounts, would be considered utter fabrication. Even then, reports could be exaggerated over time, and that is the main concerns of any literary study of her life and accomplishments."
— An excerpt from a novel written about Desiree's impact on magic and religion. 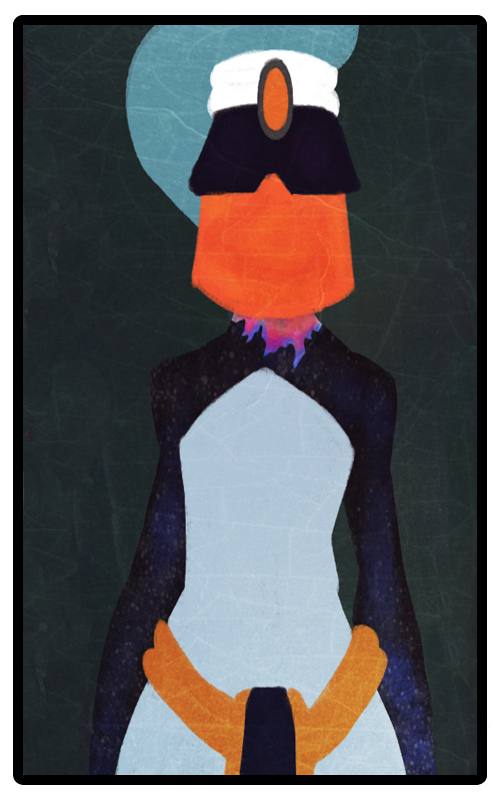 I particularly enjoyed this read CTK. You did a fantastic job of breaking down what made Desiree a powerful and unique individual and then brought her death in a graceful and meaningful fashion. You covered her rememberance and how people still study her. And of course your art is charming as always. Well done.

Thank you so much for the comment/compliments! I appreciate it. It was lovely to get an honorable mention too ;w;