Nymphs gather and giggle on golden shores as the waves lapping at their feet are teeming with life. Fish and creatures of all shapes and colors move through the waves without hindrance, their scales changing colors as the light filters down below. Here, the waves and waters stretch as far as the eye can see, reaching beyond the horizon and continuing forever, only broken by yellow sands on small islands. In this realm, the ocean rules all.   Beneath the cerulean waves, one may find ornate buildings tucked between seagrasses and other underwater plants. Coral and lichen bring color to the outer walls that match the deep colors of the waters, blending in so only the most astute would notice when passing by. Deep down, this is where one would find Caspian and his home, a temple befitting a god of his power and stature.   The Temple of Sea, hidden by the waves of Caspian's deep ocean, serves as not only home, but as the gateway between realms. Entering the gateway in the temple will lead one to the home of the Sphinxes, exiting into the Water Temple in the Southern Library. Beyond this purpose, the Temple of the Sea is so much more, but few ever find this place. Respect from Caspian is earned not given, and that is a requirement to enter the god's home.

The Temple of the Sea rests at a central location beneath the waves in the Depths, serving as home for the god Caspian as well as the seat of his power. From this place, Caspian can control everything about his realm, from the creatures that are allowed to enter, to the temperature, to even where certain layers of the ocean exist at any given point.   Magic is abundant here as Caspian uses his deep well of magic to shape the Depths to be whatever he desires at a given time. In this way, this realm is fluid, often changing as the god's emotions change with the tides.

Decorated heavily with prismarine and sapphires, the Temple of the Sea is a grand underwater temple with huge rooms and doorways that can accommodate the likes of some of the largest sea creatures found through Isekai. Seemingly built for Giants, the many rooms of the temple can be used for a wide variety of things, including grand gatherings that require numerous people and creatures to be present.   Decadent decorations including rare stones and tapestries enchanted to handle life beneath the sea line the walls and ceilings of the hallways and great rooms. Each room seems more lavish than the next, but none more so than the central room of the temple which serves as the throne room of Caspian.   The central room and those beyond that serve as the god's personal chambers are the richest in terms of decoration. It is not uncommon to see extremely rare gemstones that the Gem Dwarves would covet intricately inlaid into the surrounding stone. Everything is in a shade of deep blue, imitating the dark colors of the deepest parts of the oceans. Caspian is considered one of the wealthiest gods in terms of lavish temples and chooses to represent that wealth through the architecture of his home.

Many people choose to visit the Depths because of the cerulean waves that make up the majority of the realm, but the mortals that visit here are very rarely those that worship Caspian. Nymphs and other water-dwelling fey creatures tend to move between this realm and the world's rivers, lakes, and oceans, passing through the waves on a whim. Others that choose to visit Caspian must stay on the god's good side, a difficult feat without the correct level of respect. 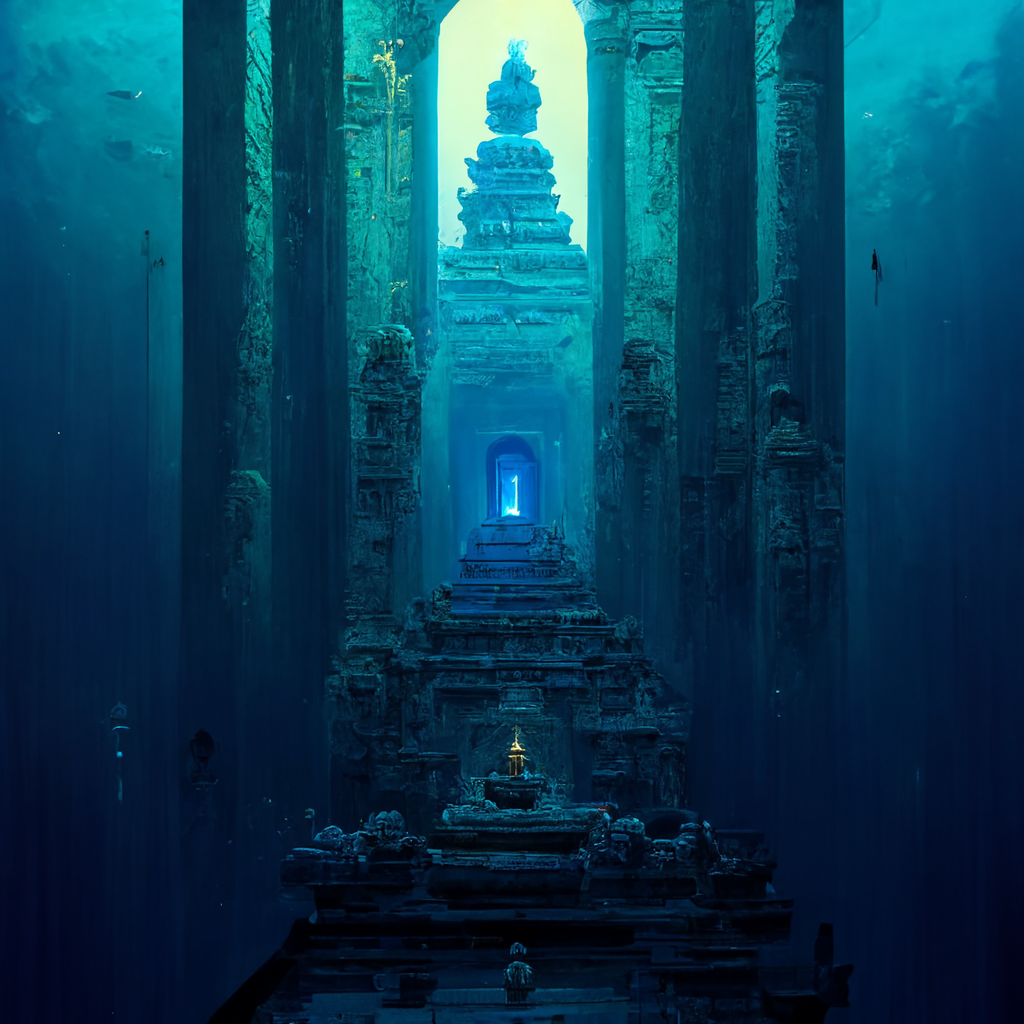 Temple of the Sea by Image via Midjourney, created by Riverfang
Known as the Temple of the Sea, the only structure in the Depths serves as Caspian's palace as well as the location of the gateway between this realm and the Southern Library.   Decorated in rich stones such as prismarine and sapphires, this temple is befitting of the God of the Sea.
Type
Cathedral / Great temple
Parent Location
The Depths
Owner
Caspian
Owning Organization
Pantheons of Isekai