Tomes bound in black leather are marked and placed perfectly on shelves of marble, inlays of white gold defining each shelf, keeping all things in their place. Each tome is written in with pristine penmanship, lines and letters drawn carefully, marking out the symbols of the language of the gods. For the God of the Gravestones, everything must be in its place so that the souls can find peace.   This temple serves as a library of sorts, but also the home of Lok and those that help him as grave keepers. All things in the Necropolis are led from the walls of this mausoleum, everything archived and kept so that no information, so that no souls, are lost because of a failure of the god and his helpers. Such a loss would be a disgrace to the title he had been given, so this place was paramount, a temple of organizational perfection.   Few mortals enter the Temple of the Departed when they are alive. Few ever visit Lok; even those who worship him tend to do so from afar. But all souls eventually end up in his care at one point or another before they move on to the paradise established by their gods. Names, dates, deaths, and life are written in his own hand about every soul, from the beginning of time, kept impeccably so that no one is ever forgotten.

The Temple of the Departed rests in a central location of the Necropolis, serving as not only home for the god Lok, but the repository of knowledge of all souls that have departed Isekai. No matter in which realm a soul ends up in after death, their life and everything about them is recorded in one of many tomes kept dutifully in the temple by Lok.   While the use of magic is possible in the Celestial Realms, Lok chooses for his grave keepers and himself that all manner of things relating to the dead and their graves must be done by hand. All recorded information is written by the god and the graves and gravestones of the departed are dug by hand and delicately carved with simple tools. To the god, this is the highest form of respect that he can grant the souls that have landed in his care.

Made out of marble and white gold, the Temple of the Departed is considered a grand mausoleum with high vaulted ceilings and large pillars that hold the ornate ceiling. Most of the temple is open-air, allowing those that wish to enter and leave without ever truly passing through a doorway. A much smaller internal chamber can be found behind an ornate metal door.   This internal chamber holds the records of all that have departed Isekai. Some magic can be found in this place as it is quite obvious that the dimensions of the room from the outside do not match the dimensions once one has entered the room. It is said that the internal chamber of the Temple of the Departed is similar in size to the grand library of the Sphinxes, holding the history of all time within its large tomes.   From this internal chamber, a hidden doorway leads to the god's personal chambers, but the architecture of such an area is unknown. No one other than Lok has ever entered the personal chambers in the Temple of the Departed as this area is seen as sacred and a place that mortals should not enter.

While tourism is common in many of the Celestial Realms, the Necropolis is not often visited by those that are still living. In some instances, mortals ignore the more practical methods of speaking with departed loved ones and attempt to gain entrance to the Necropolis so that they may have one last conversation. If the person is respectful, Lok may allow them into the Temple of the Departed so they may learn where their loved ones went after their death. 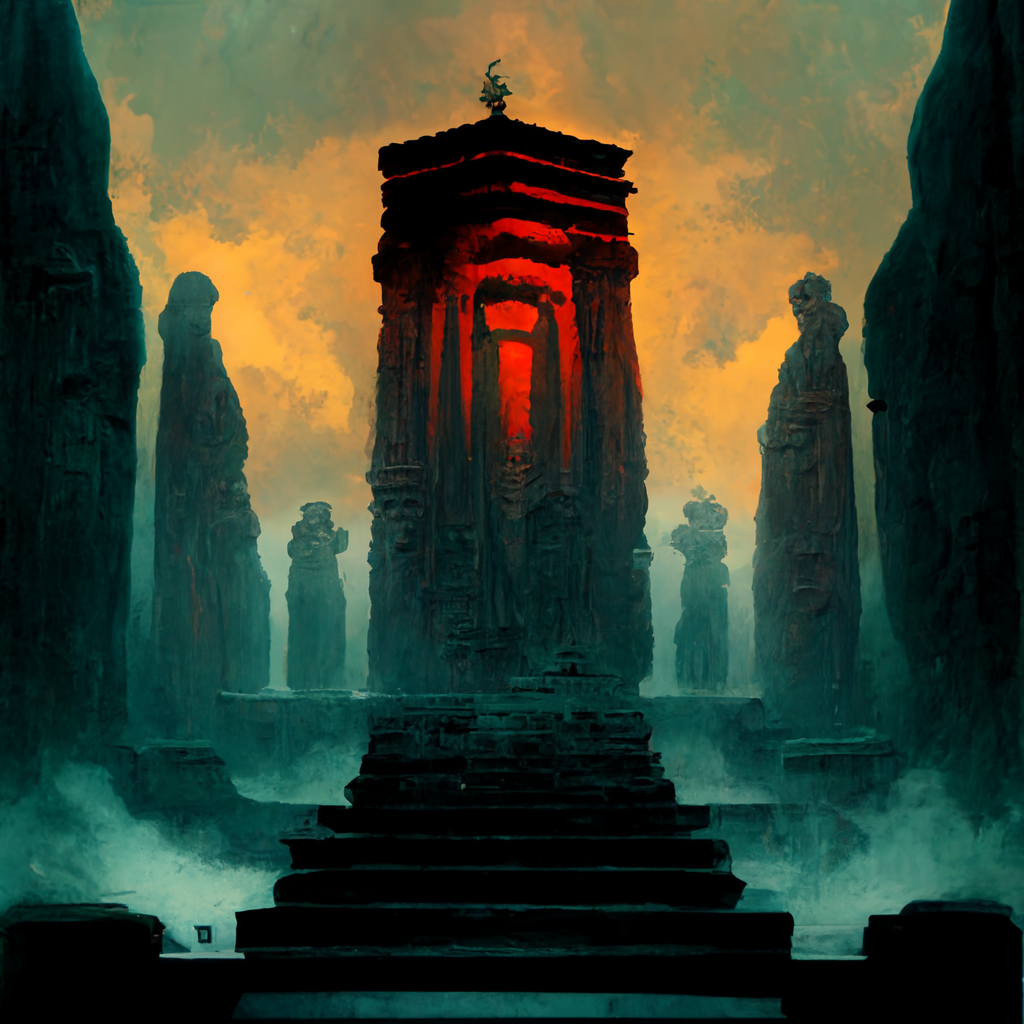 Temple of the Departed by Image via Midjourney, created by Riverfang
Known as the Temple of the Departed, this structure serves as home to Lok and his records of the graveyards in the Necropolis. This temple also serves as the gateway between this realm and the Southern Library.   Decorated as a simple masoleum of marble and white gold, this temple is befitting of the God of Gravestones.
Type
Cathedral / Great temple
Parent Location
The Necropolis
Owner
Lok
Owning Organization
Pantheons of Isekai