Haven for the Wood Elves

While under the purview of the Elven Kingdom, the Outlands stand under their own sovereignty. The Outlander tribes band together to form their own sovereign nation and protect the youngling Aelinor Oaks and other creatures within their lands. Individual tribes function with their own matriarch and elders, but all Outlanders answer to those known as the Huntsmen Elders.
The Outlands are home to a great number of wood elves, as they choose to live their lives differently than those high elves that live elsewhere in the Elven Forest. Those that live in the Outlands choose to live on the edge of two societies, to live on the fringes of a magic and diverse Elven society. They separate themselves from other elves by having their own culture and politics, choosing the protection of the Elven Forest over the pursuit of magic and sorcery like high elves.
The tribes and Elders meet regularly, shifting their meeting place between the various Outlander villages. The Huntsmen Elders are elected as leaders of all the Outlander tribe, serving for half a decade at a time. Each Outlander village is led by a matriarch, often the head of a large family in the village. Even the matriarch of a village must listen to the elders in her village and the Huntsmen Elders when it comes to choosing the greatest good for the people.
The people of the Outlands are hunters, gatherers, and oftentimes farmers. They make their living from the land and the environment around them, utilizing trade amongst the villages to aid in times of scarcity or when a village lacks the means to supply some goods. The people very rarely choose to be merchants, focusing instead on what they can do to help grow the forest and their livelihoods.
The Outlands and its people serve as the protectors of the forest and the people deep within that choose to practice and learn magic and sorcery. While a great friend and ally to their mother country of elves, the Outlands choose to be a country of their own and serve their purpose for all.

The Huntsmen Elders are the ruling council of the Outlands. Elected every five years by the majority of Outlander tribes, the Elders serve as mediators and assist with coordinating the seasonal meetings that the Outlanders conduct. They serve as the overall ruling body, making decisions for the Outlanders when the decisions of the matriarchs will not suffice.   Each Outlander tribe is led by a matriarch that is often chosen from the largest family in the village. This matriarch oversees the day to day operations of the village and working with other villages for trade and other things. The matriarch often works with the elders of her village for advice on matters pertaining to the village.

The main goal of the Outlands and its people is the protection and growth of the Elven Forest. They cultivate the youngling Aelinor Oaks that grow on the edges of the forest and work to keep animal populations within acceptable levels. In many cases, they function as conservationists.

The Outlands have very little in the way of monetary assets, but the various villages keep their own stores of equipment, weapons, and food. The villages will share between each other through trade.

The history of the Outlands is foggy in that the formation of the Outlands and its governing body are more myth than actual fact. The Outlanders think little of this history and look more towards the future and how they can better their environment.

The Outlands contains mostly wood elves that live in various villages scattered throughout the edges of the Elven Forest. These villages can be large in population, but many of them are only home to 20 to 30 Outlanders.

The Outlands covers the territory on the very fringes of the Elven Kingdom. Their lands are often where youngling Aelinor Oaks grow and do not extend very far into the heart of the kingdom. In many cases, the land an Outlander tribe occupies is ancestral land and has been inhabited by that tribes for centuries.

The Outlands does not have military forces but those that live in the Outlander villages do have training with various weapons due to their hunting skills.

The Outlanders chose to ignore the magical abilities that most elves have in favor of living off the land. Technology is not used, and some science, such as medicine, is practiced in the villages, but it is minor.

The Outlands does not have an industry but there is some agriculture in various villages. Depending on the soil and the resources in certain areas, the Outlanders grow crops such as corn, wheat, soy, and various other crops to complement their diet. Agriculture is not their main focus and is often something left to the elderly and the children.

Trade most often occurs between the various Outlander villages. Unless it is absolutely necessary, Outlanders will not trade with those outside the Outlands, wishing to keep their bounties to their own.

Outlanders are taught in their villages by the elders. Young children are taught to read and write Common, Elvish, and in some cases, Dwarvish or Sylvan. As not all Outlanders live their entire lives in the Outlands, they are educated so that they may keep up with elves from elsewhere in the kingdom in terms of literacy. Other teaching, such as that about hunting and other things necessary to live in the Outlands, is often done by a child's parents or extended family.

Infrastructure is nearly nonexistent in the Outlands, as the Outlanders choose to live naturally. Roads are mostly widened game trails and the buildings in the various villages are sparse and simple. 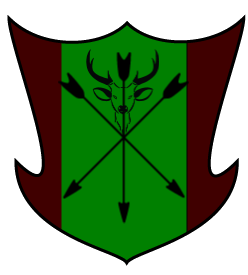 Hunt for the Forest

Founding Date
circa 500 I.M.
Type
Geopolitical, Tribe
Alternative Names
The Woodlands
Demonym
Outlanders
Government System
Tribalism
Power Structure
Federation
Economic System
Barter system
Currency
There is no official currency in the Outlands, but things such as hides, antlers, and other animal goods may be used for payment or trade.
Major Exports
When there is an abundance, the Outlanders will sometimes export the wood of the Aelinor Oaks for building purposes to the human territory. This will only occur if the needs of the entire Elven Kingdom are taken care of first.
Major Imports
As Outlanders do not trade with those outside the Outlands, there is very little in the way of imports that come in. Some animals, such as cows or sheep, may be brought in from the human territory, but it is extremely rare.
Legislative Body
The Outlands are led by the Huntsman Elders that oversee the making of laws that effect all those who live in the Outlands.
Judicial Body
The Huntsmen Elders also serve as the interpreters of the laws of the Outlands.
Subsidiary Organizations
Location
Elven Forest
Related Traditions
Controlled Territories
Neighboring Nations
Related Items
Notable Members
Related Myths
Outlands

Answering: "Describe a country in your world, including its political structure and history."
Visit RiverFang's Competition Page Check all other answers to this prompt Competition Homepage