Their Place in the World

Orcs are a species that appeared suddenly and forcefully in the world and few know of their true origin, their self proclaimed charge appears to be to expand and cause strife in the world with their every breath. Their role in the Eldritch War was an antagonistic one as they saw the chaos as an opportunity to wage their wars and force Humans and Elves to fight on two fronts which resulted in heavy losses for the Elder Races and explains why Orcs still have vast numbers to this day. Orcs are known to be aggressive brutes that are cruel in combat that often attack or enslave other races but they can also be bought as an attacking force if you can sate their greed and lust for battle.   Currently, they live in the mountains, the Underdark and in the swamps of the world but small bands of exiles or raiding parties can be found far from their natural homes. The largest concentration of Orc tribes and settlements is found on the Northern Continent in a place called the Moorlands, here the nest of the Ancient Black Dragon Nizlek still stands and is a testament to their service of the evil a thousand years ago. This race will thrive in the most inhospitable areas and seek to pillage and burn the settlements of other races in order to thrive and when they cannot war against other races they will war against themselves destroying the landscape that they call home in the process.

1. The strong exist to tower over the weak, the only way to determine weakness is to test it and strike out in glorious war until one side falls lifeless before the other.   2. War has no rules except that the victor shall have total dominance over the loser. In this all tactics are acceptable but those that win through open combat on the field of battle will receive glory and status above those that use methods that communicate weakness.   3. Glory and Battle are the deciding factors of status among all Orcs and tribes, if one wishes to raise their status they must be victorious in many battles and then contest the status placed upon them through single combat.   4. Single combat is a sacred agreement whether it be between Orcs or Orc and another species, those that would violate its sanctity will suffer death.

Orcs get along with any race that they deem to be strong but that does not prevent them from going to war with those same people unless a treaty has been established. Despite seeming like brutes from an outside view, Orcs are very legalistic and honor-bound to traditions and laws.   Orcs have a particular distaste for Elves, if given the choice of what species to attack they will almost always aim their blades towards an Elf. A deep hatred goes between these two races because they have attempted to eradicate each other since the Orcs first appeared. Legend states that Orcs were once a type of Elf that mutated and fell under the influence of dark power but there is little to substantiate this aside from the hatred between them.   The greatest insult to an Orc is to violate the sanctity of single combat that both parties have agreed to.

Orcs are a humanoid species, meaning that they have two arms and two legs with internal anatomy that is similar to the layout of a human. The main differences from the Human physique are: tusks, green or brown or grayish skin, explosive physical power that makes them fierce combatants on any type of battlefield. Orcs are built large and if they were not a warfaring species then they would be perfectly suited for the rigors of farm or mining, they have eyes only for combat though which allows them to pummel, grapple and throw enemies of similar sizes as if they were rag dolls. Orcs possess very pronounced tusks that protrude from their lower jaw, these come up in front of their face much like a warthog's would and give them a particularly nasty bite that is hardly ever seen in combat.   The final and most notable trait of the Orcs is their ability to explode with sudden power which can propel them forward in combat. Orcs have been noted as especially dangerous sprinters which makes fleeing from them in combat just as dangerous as facing them, because not only can they often outpace their enemies but they also relish the chase of what they view to be weak creatures on the field of battle.

Orcs are not known to have inherently mystical abilities, their traits are focused on physical aspects and have to do with their hardy physiology.   This species have almost no variety that grants unique physical or magical abilities, rather all of their standard varieties simply have an impact on how they look. Orcs can come in dozens of shades of color, from a deep blue to a bright green or an earthy brown but they are identical in terms of physical abilities with little variation in height or muscle tone.   The uniting features that span across all variations of Orc are their ability to exhibit explosive speed, to see keenly in the dark and they have the natural ability to back down most creatures through the use of brutal intimidation. Most animals and other monsters will steer clear of Orcs as long as they are strong and healthy because they naturally exude a hormone that causes a fight or flight response in most creatures. 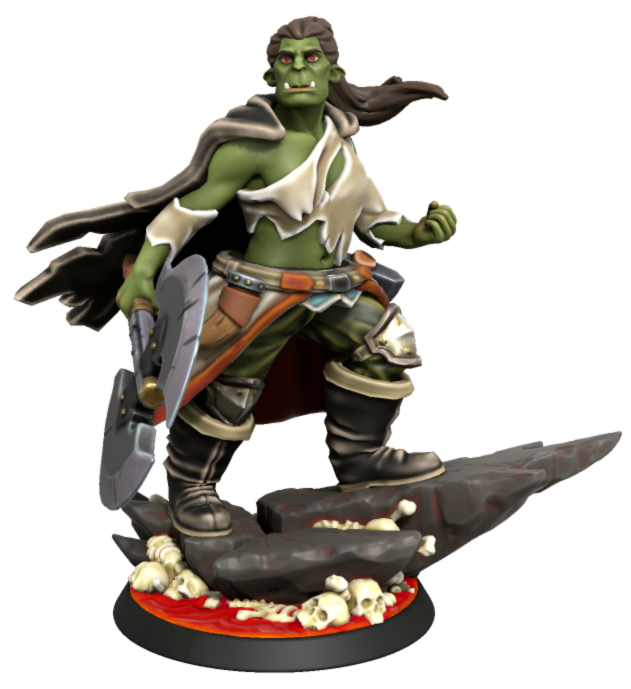 Age: Orcs reach adulthood at age 12 and live up to 50 years.   Alignment: Orcs are vicious raiders, who believe that the world should be theirs. They also respect strength above all else and believe the strong must bully the weak to ensure that weakness does not spread like a disease. They are usually chaotic evil.   Size: Orcs are usually over 6 feet tall and weigh between 230 and 280 pounds. Your size is Medium.   Darkvision: You can see in dim light within 60 feet of you as if it were bright light, and in darkness as if it were dim light. You can't discern color in darkness, only shades of grey.   Aggressive: As a bonus action, you can move up to your speed toward an enemy of your choice that you can see or hear. You must end this move closer to the enemy than you started.   Menacing: You are trained in the Intimidation skill.   Powerful Build: You count as one size larger when determining your carrying capacity and the weight you can push, drag, or lift.

Languages. You can speak, read, and write Common and Orc