The Underdark is no stranger to those creatures that wish to capture and kill their prey in the most painful and slow ways possible. Basilisks, Black Mantis, and other seemingly larger than life creatures follow this line of thought, capturing their targets through petrification, suffocation, and other horrendous ways. The large dangerous creatures that are most recognizable are often not the most deadly in the Underdark. The small seemingly harmless ones that hide in the dark recesses of the ceilings and floors of the cavernous tunnels may be the most deadly yet.   The Leopufele is one such creature. More commonly known as the Underdark Flying Squirrel, these creatures can fit in the palm of the hand and are reminiscent of the small flying squirrels that can be found in the forests on the surface. Their appearance is out of place in the dark depths of the Underdark, but like all creatures that live within this harsh environment, they harbor a dark secret that allows them to survive against the ever-increasing odds.   Under their bushy and cute exterior, the Leopufele harbors one of the deadliest poisons of Isekai. The fur of their tail hides a barb, that when in danger, the creature can use to inject a highly toxic poison into those that wish to cause the creature harm. This poison will inflict a short time of lucid dreaming that is full of terrible nightmares before slowly killing the inflicted through suffocation. While a less terrible death than many creatures of the Underdark can grant, the Leopufele and its poison are known to take down a troll or other enormous creatures with a light brush of the poisoned barb.

The Leopufele's natural habitat is in the dark caverns of the Underdark that are roughly three to ten days travel from the surface world, meaning they live in some of the middle depths of the Underdark. Much like the burrowing ground squirrels of the surface, these creatures make their homes by burrowing into the giant stalactites that hang from the ceilings of caverns, putting them out of reach of most other creatures. Due to their size, the Leopufele are often mistaken as prey by both creatures and people, but due to their potent poison and ways of hunting, the Drow have designated the creature one of the many apex predators of the Underdark.

Leopufele are ravenous creatures, often looking for large prey, such as landsharks, basilisks, and others, for their meals. These creatures live in large groups, swooping down upon a large creature, creating a distraction, while often the smallest and fastest of the group drops upon the prey to poison it. Once the prey has been poisoned, the group moves back towards the cavern ceiling to wait for their prey to succumb.   Once the prey of the Leopufeles has died, the group then swoops to the corpse, quickly disassembling it like a school of piranhas. Each bone is cleaned and left, with no trace of the meal that the small creatures had partaken in. This ritual takes place every one or two days, based upon the types of prey that the Leopufele can find close to their homes. 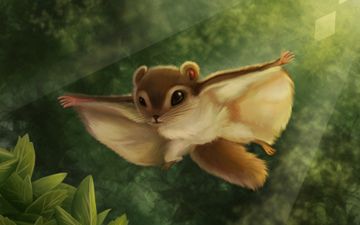 Due to the extreme darkvision and deadly hunting methods of the Leopufele, the Drow have domesticated a large portion of the creatures found around their cities for use in tracking and hunting. With the Leopufele's small size and a range of darkvision that is nearly double that of the Drow, they are excellent and silent trackers. Using them for more than tracking requires a much more educated approach.   Those that wish to use the Leopufele for hunting must carry a special form of additional poison that prolongs the lucid dreaming so that the Drow may catch up to their prey. This poison is added to the Leopufele's barb before a hunt and can be potent for many days after the first application.   While helpful creatures, these are most commonly found to be the pets of noble families, as the time needed to train and learn the proper handling of the creatures takes many years.
Mammals

Answering: "Write about an apex predator in your world. How does it hunt and survive?"
Visit RiverFang's Competition Page Check all other answers to this prompt Competition Homepage

Nice!! Curiosities: Do they ever try to "de-fang" (or I guess barb, in this case) the leopufele so they have a non-poisonous pet? Would they have a way to milk the poison (like snake fangs) to collect the poison for other uses?

Me: Awww, so cute. Article: '[T]he group then swoops to the corpse, quickly disassembling it like a school of piranhas.' Me: D: