The trees wave in a slow breeze, their leaves coming together in soft hushes. Even a forest this serene and quiet must have its predators, but the one that roams quietly through the shushing trees melds with the greenery of the forest, hiding amongst the foliage that litters the floor of the Elven Forest. Between the boughs and thick trucks of the Aelinor Oaks, a magical and delicate predator roams, moving between the trees, with no trace of fur nor claw to lead a wanderer back to it.   Juniper Wolves are one of many predators among the trees in the Elven Forest, but they are also the gentlest and most elusive of any that roam the woods. Their bodies meld with the trees, their fur-lined with greenery and dark colors that are reminiscent of the Juniper trees that once gave them their name. These large and gentle beasts keep to the shadows or the thick underbrush, hunting and moving in a silence that can be unsettling.   These wolves came to the forest from the magic of the trees, similar to the magic that brought forth the Aelinor Elk, also of the forest. It is said that a wolf found solace in a tree deep within the forest and the forest's magic made the wolf more like the tree. But the elusive nature of the creatures makes it nearly impossible to study and learn more about them. Only myths surround their origins, and little else is known about them.

As no Juniper Wolf has ever been studied closely, much of the information known about them is based upon other wolves in the Elven Forest with conjecture added when it is believed that something has been discovered. It is assumed that their anatomy is the same or very similar to a grey wolf, with fur that resembles the foliage of Juniper trees.

It is assumed that these creatures have extreme perception and other sensory capabilities as they are extremely good at hiding as well as recognizing sounds that may be considered a treat. Very rarely are these creatures snuck up on, instead, they are often only viewed from great distances through the help of magic. Their natural camouflage allows them to blend in with their surroundings flawlessly.
Scientific Name Junipuris Canis Lupus
Lifespan 6 - 8 years
Average Length 3.4 - 5.3ft
Average Height 2.2 - 2.7ft (Adult, At Shoulder)
Average Weight Male: 66 - 180lbs (Adult), Female: 51 - 120lbs (Adult)
Average Speed 31 - 37mph (Running)
Conservation Status Unknown 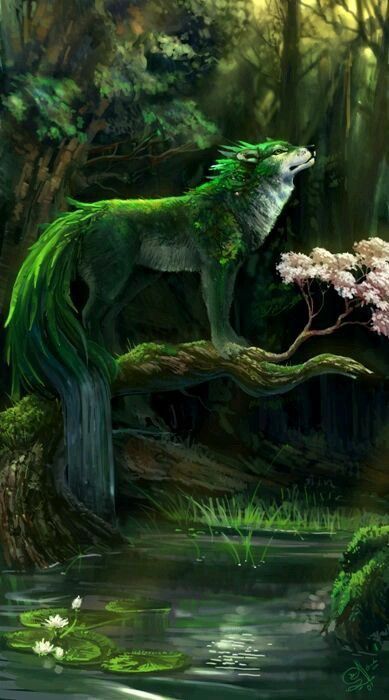 I Dream Of by Silvarn

Flora & Fauna of the Elven Forest

<3 Cute creatures, do they smell like juniper too? That first paragraph is top tier inspiring. I am saving it to show my child as an evocative description example.

These sound like amazing creatures. The description about how quiet they are sent a shiver up my spine.