Home of the Monster Mage

Harkin is the town where the resident lord, Darius Nizz, makes his home. This is a sizable settlement on the frontier of the Human Empire, right on the edge of the Great Plains and surrounded by all manner of wildlife. High wooden walls serve to keep predators and goblins out so that the townsfolk can lead a happy and thriving lifestyle. Here you will see adventurers that are a part of the famous Dagger Guild, trappers and ranchers that come to sell domesticated dinosaurs and the goods produced from them to travelers.   This town serves at the gateway for important trade routes from the Little Greenwood that come right up into the Human Empire to deliver food and other goods from the coast. Food comes north, prehistoric goods go south, and any number of adventurers will go either direction looking for work, fame or fortune. The dangers posed around this town come in the form of goblin bandits that ambush travelers and velociraptors or other large predators that attack small groups of travelers by using the tall grass to ambush them. For all these dangers Harkin is a peaceful place that sees a fair bit of property under the lordship of Darius Nizz who has only been in charge of the area for the past five years but during the time he has made such improvements as eliminating any toll to move through the town, bringing an enchanter, a skilled cleric and most recently a master smith of mystical weapons to the town to become permanent residents.

The majority of the population, to include the standing army, are humans. Other races in the town include elves, half elves, halflings, one loxodon, and one goliath. Despite lacking a huge amount of diversity visitors of all races are welcomed unless you belong to a dwarven house other than the Jadeshapers.   Most people that live in the town have a domestic trade associated with the raising, outfitting and use of dinosaurs. You will find many people that are knowledgeable about hunting, tracking, trapping, and working various goods that come from dinosaurs.   Magic users are rare here being restricted to the resident enchanter, cleric and the noble himself studies a unique type of magic.   People in this area see a fair amount of prosperity, both tradesman and merchant alike are able to push their wares to caravans and adventurers that come to the frontier to look for a starting point to jump off. That combined with a growing interest in the frontier has made the town a thriving place for trade and travel alike with many new faces coming through every day and some staying to start a new life.

The Human Empire is divided into large sections of land that take approximately three days on foot to cross at the narrowest point, roughly a hundred miles. Each of these areas are ruled by a lord that receives the approval of the Empress to continue looking after the people there as they see fit. In their domain a lord is the absolute authority on how towns shall be managed, what taxes shall be paid and how law will be enforced as long as it does not conflict with Imperial order.   The lord of this area is Darius Nizz, an eccentric man that is famously known as the Monster Mage. He gained favor with the Empress when she ascended the throne five years ago and was appointed lord of this area to ensure the success and the survival of the frontier and its trade route.   The most prominent law that is enforced in this area is the record of all people that move through the towns. Accurate ledgers are kept that identify the name, purpose and magical discipline of all travelers. The toll commonly associated with entering a settlement is not present in any towns ruled by this lord. Standard taxes are placed upon transactions that occur on creatures, merchant wares and magical transactions that are built into the prices and paid by the merchants or service provider. Residents in the area pay moderate taxes to finance town defenses, local education and the general upkeep of public buildings.

Defenses of this area include a standing army of well-armed and trained Soldiers from the Human Empire that number in total 150 strong. This army is divided between 50 archers, 50 swordsmen with heavy armor and 50 light cavalry units that use Velociraptor mounts meant for speed.   The local cleric often supports the army with medical assistance and healing while the enchanter has made magical ammunition for archers from time to time for reasonable rates. The only true wielder of destructive magic is the lord of the area.   The town is also surrounded by a 30-foot wooden wall that is outfitted with platforms all along the wall to allow Soldiers to easily stand and defend the wall from the top.

Harkin has prominent buildings that house:   Dagger's Guild, Tavern and Inn (the only Inn and Tavern in town, welcomes travelers and guild members alike)   The Temple (a general temple for all practitioners of faith to receive instruction, aide or the assistance of a cleric)   Trispen's Enchanting (residence and place of business for the local enchanter)   Castle Nizz (the castle where Soldiers are housed and the lord of the area lives)   In addition there is a district or a main street lined with buildings and raised platforms where anyone can find blacksmiths, general wares, dinosaur mounts, eggs and hides. Beyond this there is a large and ever-expanding area for resident settlements, personal gardens (something encouraged heavily) and stables that are run at a reasonable rate for the public.   Roads in the town and the entire area are kept up by workers from this town and others that belong to the area ruled by Darius Nizz and they consist of wide gravel paths that allow the passage of 2 triceratops drawn wagons to pass each other going in opposite directions. Unfortunately, the Traveler's Grass grows so quickly that it cannot be cut back far from the road enough to prevent ambushes from predators or goblin bandits.   Harkin and all towns in this area are surrounded by thirty-foot walls made of logs that have been cut, bound and lodged firmly in the earth.

Mundane weapons, armor, dinosaur mounts of all varieties and general wares can be found in this town. Specialty items can be created by skilled artisans, but the raw materials must be harvested and brought to them. Nothing more magical than a healing potion is kept on hand unless it can be found among the traveling merchants.

The town of Harkin has only stood for a total of 30 years.   It was initially founded as a castle to push back goblin bandits and invaders, initially being run solely by a military official named Reston Keys. This person was successful in driving the Goblins back from the area and providing protection to the druidic village of Kar. During this time Harkin was under constant threat of goblin attack led by a prominent hobgoblin commander named Geralt, Bane of Iron. This resulted in victories, losses and several indecisive battles where military force alone proved to draw the situation out due to the unique abilities possessed by the enemy commander.   This culminated in a final battle that left both sides without the means to continue but the castle still stood tall on the plains. This marked the end of an era of bitter rivalry between the humans living on the frontier and the goblin hordes. Fifteen years after Harkin was established as a settlement it had proven its strength against the hobgoblin commander and earned some well-deserved breathing room.   The next ten years were a period of buildup. People moved out and settled around the castle, walls were erected, and the small town became a stop on the way to the pit mine of Farfallen and other settlements before eventually arriving at the capital of the empire. This was overseen by another military commander that instated the common regulations observed by the human empire to include an entrance tax to all cities, an ordnance which the druid town of Kar resisted. The town was considered a moderate place to live and adventurous folk moved out to set up shops, forges, homes and live on the edge of the empire.   In Spring's Morning of the year 295 E.A. this territory was given to a newly appointed lord, Darius Nizz, who abolished several forms of taxation on the resident population and has acted with what many called a good nature that borders on eccentric. During this period, specialized casters and craftsmen have been contacted by the lord of the area and paid to move to it which has equipped the town with specialties that no other frontier town can offer travelers. The current state of the town is considered peaceful and prosperous, goblin attacks have been restricted to poachers and bandits on the road but as of late there have also been scouting parties of well-trained enemies ambushing travelers. These scouting parties give the town a wide berth and do not seem willing to approach large or well-armed groups. 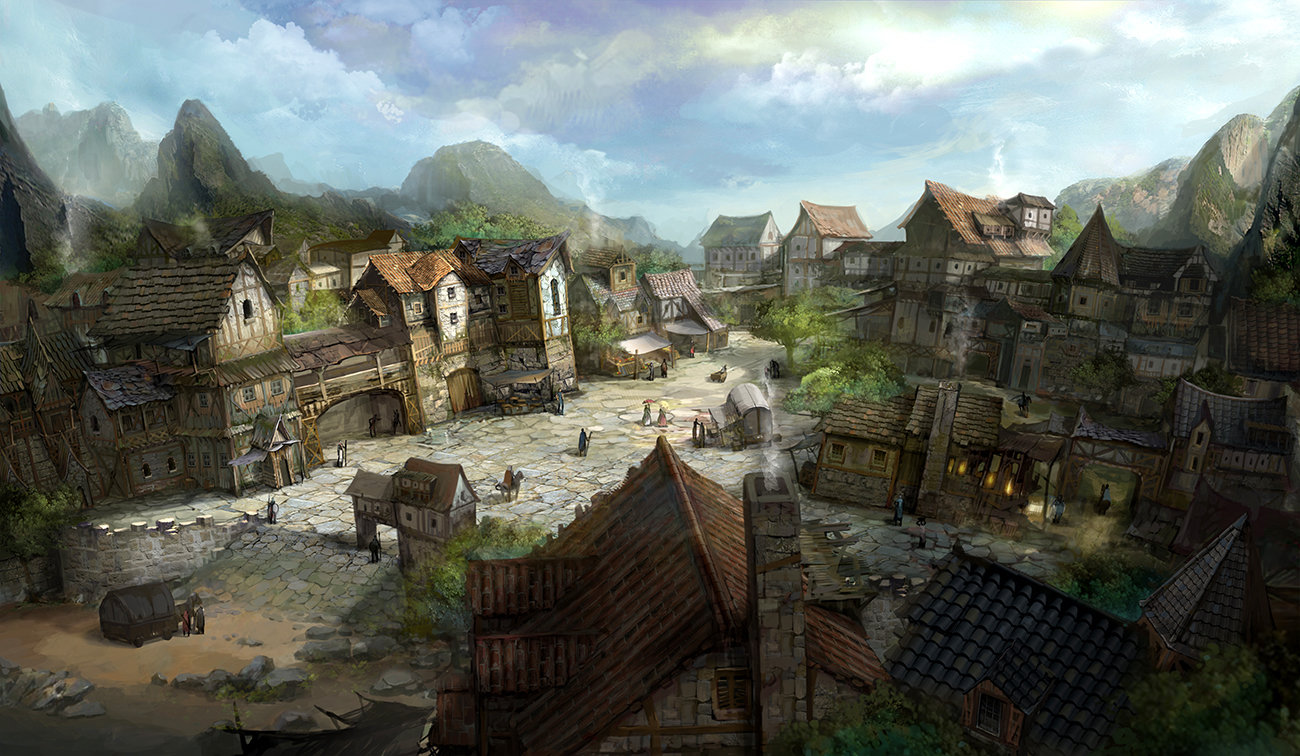