Shining scales glitter through the crystalline waters as the slim bodies of the fish dance amongst the shallow waves. Bits of gold and silver shine in their movements, a trick of the light that would have even those not overcome with greed diving into the depths of the lake for the riches that lay there. The delicate fish that drift between soft leaves and weave between the large shapes of freshwater oysters are one of the smallest creatures that can be found in Lake Idryl, but their presence is overwhelming, enough to bring fame to a small lakeside town.   Faefish are a small, delicate fish with silver scales that can only be found in the clear waters of Lake Idryl. Their numbers are extreme, estimated to be in the millions, but the delicacy of their flesh keeps their outrageous numbers in check while expanding an ever-growing empire of canning that slowly grows around the lake.   They may seem to be like any other fish, but their scales glitter like shiny coins in the clear waters of the lake. Those at the Unending Scroll believe that the scales of the fish have been affected by the magic of the Aelinor Oaks that has leeched into the water from the Elven Forest to the north. Others believe it is the depths and clearness of the lake itself that make these fish special, but in their millennia in the lake, the fish have not changed or given any hints to their origin and uniqueness.

Lake Idryl is unfathomably deep and sustains diverse ecosystems beneath its clear waves. Faefish are only one of the many creatures that live beneath the idyllic waters, but their range and choice of home are by far the most far-reaching. These fish choose to make their home in any place that can be considered safe within the lake, but they prefer the warmer waters closer to the surface and around an abundance of plant life that can be used to hide and as shelter.   That being said, it is not impossible to find a Faefish in the far depths of the lake, its brilliant shine damped by the cold darkness that is found in the deepest parts of the center of the lake. As the days become too warm and the predators abound, the shiny fish may move to the far reaches to remain out of the grasp of predators from the land.

Faefish are the most common type of fish harvested for canning from Lake Idryl. Their numbers are prolific, allowing for constant harvesting and canning at the cannery in Merrick.   The small village of Merrick is considered the Faefish capital of the world, boasting a production of nearly a million jars of the fish sold each year. Around the lake, the canned fish is considered food for the poor, often chosen if no other food can be had. The further away from the lake one goes, the more of a delicacy Faefish becomes, bringing in greater profits as the sale of Faefish expands to the far reaches of Vóreios and even the faraway continent of Nótios. 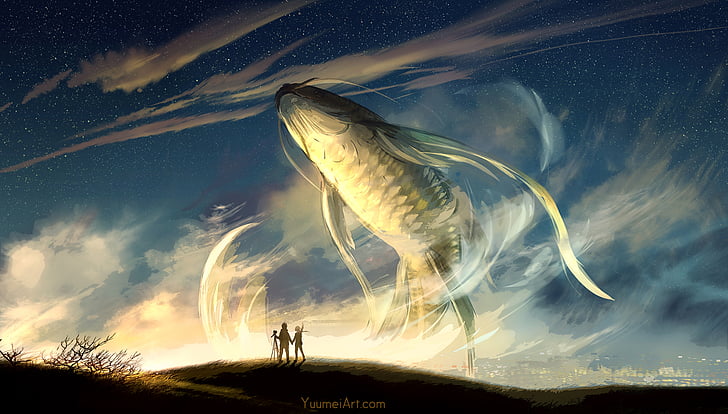 Guardian of the Golden Gates by Yuumei
Scientific Name
Fae Splendidus
Lifespan
Unknown
Conservation Status
There is an extreme abundance of Faefish in Lake Idryl, nearly to the point where the species is considered a nuisance or an invasive species. Numbers are thinned through fishing and trapping practices that supply the canning industry, mostly in the village of Merrick.
Geographic Distribution
Related Technologies
Fish

Fish!   I really like the detail that a canning industry is growing around the lake. Makes the world feel alive. :)