The White Hawks are a renowned division of the Chelestran Army. Originally a ragtag band of mercenaries, they showed remarkable skill fighting in the Great War, and were adopted into the Chelestran Army as professional soldiers in 1732. Their unbroken series of successes has attracted a great deal of attention from the Chelestran Nobility. Upon the conclusion of the war earlier this year, King Shapur XII had them assigned as his personal bodyguard, much to the consternation of the leaders of units traditionally granted this position.

The White Hawks number about half the size of most divisions in the Chelestran Army, preferring to employ hand picked elite warriors rather than a larger number of minimally trained recruits or worse: raw conscripts. In total the division is composed of 450 individuals: the general, the executive officer, and 8 batallions of 6 officers and 50 soldiers, as well as 20 soldiers who handle the baggage train, under the direct authority of the executive officer.   Each batallion is led by a captain, under whom 5 sergeants lead platoons of 10 soldiers. Each of these platoons also has two squad leaders, allowing the platoon to separate into two groups of 5 while allowing their sergeant to move between groups as needed, or 3 groups led by the sergeant and both squad leaders.   This ability to separate into such small teams is unique among the Chelestran Army, and dates to their days as a mercenary company. Even now, each member of the White Hawks is recruited by their leader, General Gavin Tethren, picked as much for their intelligence as their martial prowess. This, accompanied by the unit's practice of ensuring each soldier understands their objective and how that objective fits into the plan as a whole, has made the division the most adaptive force seen in the Great War. More than once, initial plans have gone awry only to be salvaged by an improvisation provided and implemented by a single squad in the right place at the right time.

The White Hawks operate as a mixed unit of cavalry, mounted infantry, and Magi. All 8 batallions are provided horses equipped with riding saddles and saddlebacks including a bedroll and blanket, mess kit, tinderbox, torches, rations, 2 water skins, 100 feet of rope, and a spare uniform. Half of the soldiers carry small, 2 person tents, and the other half carry a cookpot or pan; all officers carry their own tents, granting the offers an added degree of privacy.   First and second batallions are specialized heavy cavalry, and most reliant on the baggage train for their equipment. In battle, they wear full body plate armour and their horses wear barding of mixed plate and flexible scale armour, and are equipped with javelins and lances, as well as a mix of arming swords, battleaxes, and war hammers for use after an initial charge.   Third batallion is made up of magi, though all of these are trained in martial combat as well. They wear lightweight leather armour and wield a wide variety of melee weapons in emergencies. Their main specialized equipment is an array of spellcasting components and magical devices that enhance their abilities. The exact details of this equipment vary significantly.   Fourth batallion operates as light cavalry and scouts. They wear much lighter armour, and are primarily equipped with shortbows and arming swords, allowing them to strike quickly from range and withdraw before the enemy can respond, and outrun persuit even from most heavier cavalry.   Fifth through Eighth batallions operate as mounted heavy infantry. Each is equipped with brigandine armour, made up of layered steel plates on a leather backing and carries a weapon of choice. The baggage train carries a mix of longbows and heavy crossbows, pikes, and tower shields sufficient to outfit all four batallions for spear formation combat or ranged combat as needed.

The White Hawks training emphasizes flexibility and trust in eachother and their leaders over all else, though their plans tend to favour misdirection, presenting false opportunities to their enemy. Their more granular unit makeup allows them to operate with squads as small as 3-5 soldiers. To enemies accustomed to seeing units operate in groups of 20 or more, it is easy for several of these squads to pose as a single unit, seeming to be occupied with exposed flanks. Many a cavalry charge has fallen to the White Hawks ability to quickly form spear formations out of what seemed to be an outflanked unit of footsoldiers.   The Hawks place heavy emphasis on their mages ability to confound the senses of their enemy and, above all else, the battlefield intelligence provided by the expert scouting of the 4th batallion. These, combined with their unconventional battlefield tactics and unusually high level of martial skill make the Hawks extremely dangerous on the battlefield.

Since the end of the Great War, the White Hawks have been forced to adjust to a role as the high profile security corps for King Shapur XII and his palace. This has been a difficult adjustment for many members of the White Hawks, who have a varied and often quite colourful background. They patrol the outer walls of the Royal Palace in Galade, as well as patrolling guardens and standing guard at all entrances. In these roles, they wear dress uniforms including brigandine armour with the outer linen layer dyed in the Blue and Green of Chelestra and bearing the unit's heraldry. 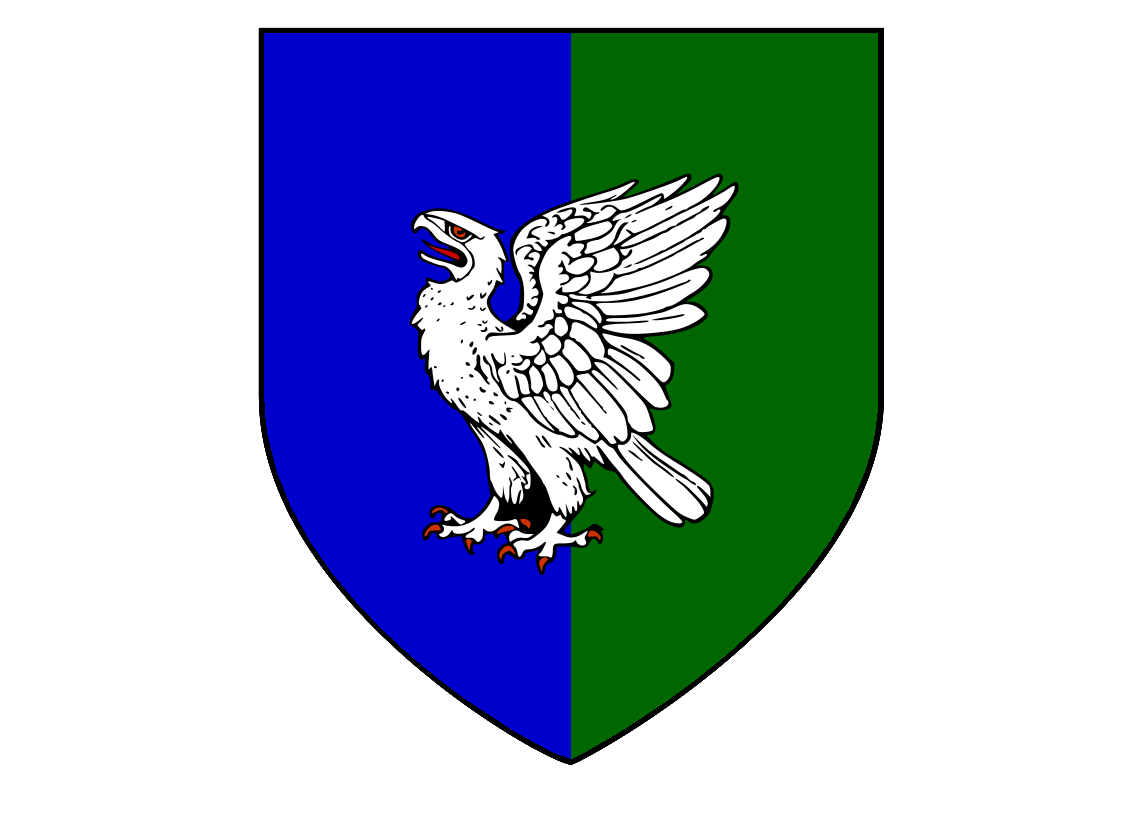 Heraldry of the White Hawks

Answering: "a unit or squad who guards an important person"
Visit Rashkavar's Competition Page Check all other answers to this prompt Competition Homepage

If it's not obvious, the inspiration for this unit is the manga series Berserk. I've only ever watched the 1997 anime release, so to me Griffith's personal army in the early part of the series (the entire run of that anime) is called the "Band of the Hawk" (though apparently more faithful translations refer to them as the "Band of the Falcon"). I've been wanting to write something as tribute to Kentaro Miura ever since he passed away earlier this year, and when this prompt came up, the idea just clicked in. I won't be copying all of the details, though I do intend one of the officers to be a large man with an enormous sword who's naturally drawn to fighting, in reference to the main character of the series, Guts.

I like the idea of a mercenary band who became a trusted unit in the army and then the private security of the monarch. I am not surprised the other units are a bit put out, though.   Great tribute, too.