He has spent his last years tethered to the rock. While only mere seconds in the life of a demon, he could not bare the limits of his prison. It weighed on him too much. He could barely use his powers, could only pitifully drag himself around the land. But he had a plan, and soon he would be free.

The power of an Ikemo Lord is no secret. The mere presence of such a being shrinks you to nothing more than a cowering puddle, and it takes considerable might to simply withstand their gaze. Mapashtimuva, Of The Many Faces, is a lord among lords, feared even by his pairs.

That a mere mortal could bind him in such a way was a humiliation and affront he could not forgive. 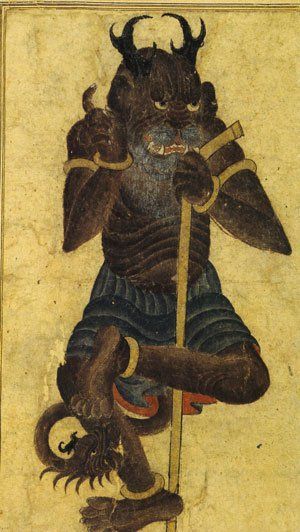 by Mehmed Siyah Kalem
He had once ruled over the Akazel, commanding legions and dominating thousands of cities. When he was pulled from his realm and brought to the Material Plane by a summon, he had not expected it to be any different from his past experiences. The foolish mortal would try to command him, but inevitably Mapashtimuva would get the better of them, one way or another.

This time had been different, however. He had expected to meet face to face with whoever had summoned him, and he had prepared his most frightful appearance. Instead, his very being was sucked into strange bindings of some sort.

The inky darkness felt cold and wet. The Ikemo tried to move, but he could feel himself stuck, unable to escape the place he had been trapped in. His attempts to undo the restraints fell flat. They were of a nature he did not know, could not grasp. Yet, there was a fault to them, gaps between the chains he could slip through.

The identity of his tormentor is unbeknownst to Mapashtimuva, despite his many attempts to uncover it. His captor took great care to keep his name hidden, not wishing to draw the ire of the Ikemo to him were he ever to escape.

After an arduous effort, the Lord of the Akazel was able to set a curse on his jail, a first step in his path to freedom. Whoever reads the inscription on the stone and pronounces his name becomes bound to the stone. It will follow the mortal around, waiting for them to pass so that Mapashtimuva may collect his soul. But due to his restraints, several involuntary effects have added themselves to the curse.

Whichever person reads the inscription aloud is considered Cursed. Their shadow becomes a Shade, which will attempt to attack them discretely while they are in combat. Killing the Shade results in its destruction, though it reappears in 1d4 days.

While bound to a person, the stone will remain within 60ft of them, attempting to remain hidden whenever possible. If the cursed person pronounces "Mapashtimuva", it causes the rock to appear behind them for a moment.

The key to undo the curse is to pronounce "Mapashtimuva" backwards (as hinted by the second inscription). If the party comes up with another creative solution to undoing the curse, it can be used instead.

For more information on curses, check out this article!

How to Trap an Ikemo

Behind the summons that led to Mapashtimuva's imprisonment is Ismael of the Stars, a talented and powerful mage.

After decades spent studying artefacts and the ancient Bassek writings of the Baseikans, Ismael attempted to create a Soul Trap of his own.

He selected and prepared a vessel for his victim, experimenting with enchantments in hope of reverse engineering the technology of the Baseikans. For years he tried and failed, until in 298 I.A he was able to bind the essence of a powerful Ikemo to a carved stone.

However, he was not entirely successful. There were gaps in his magic through which Mapashtimuva could slip through, and fearing for his safety Ismael discarded the stone in the wilds.

The rock itself to which Mapashtimuva is bound is a solid sandstone block, with a carved face on its top. It is about 60cm tall on a flat base, seemingly looking up at whoever stands above it. Its presence is unsettling, and the mere touch of it is enough to fill one with disgust. On its head can be read the following inscription:

In the shadows I sleep, behind you I stand. Mapashtimuva is my name.


On its bottom is the following inscription:

One must go backwards.


They look old and hand carved, and appear to be written in the mother tongue of whoever reads them. Casting Detect Magic on them reveals that they are magical, though does not cite a particular school of magic. 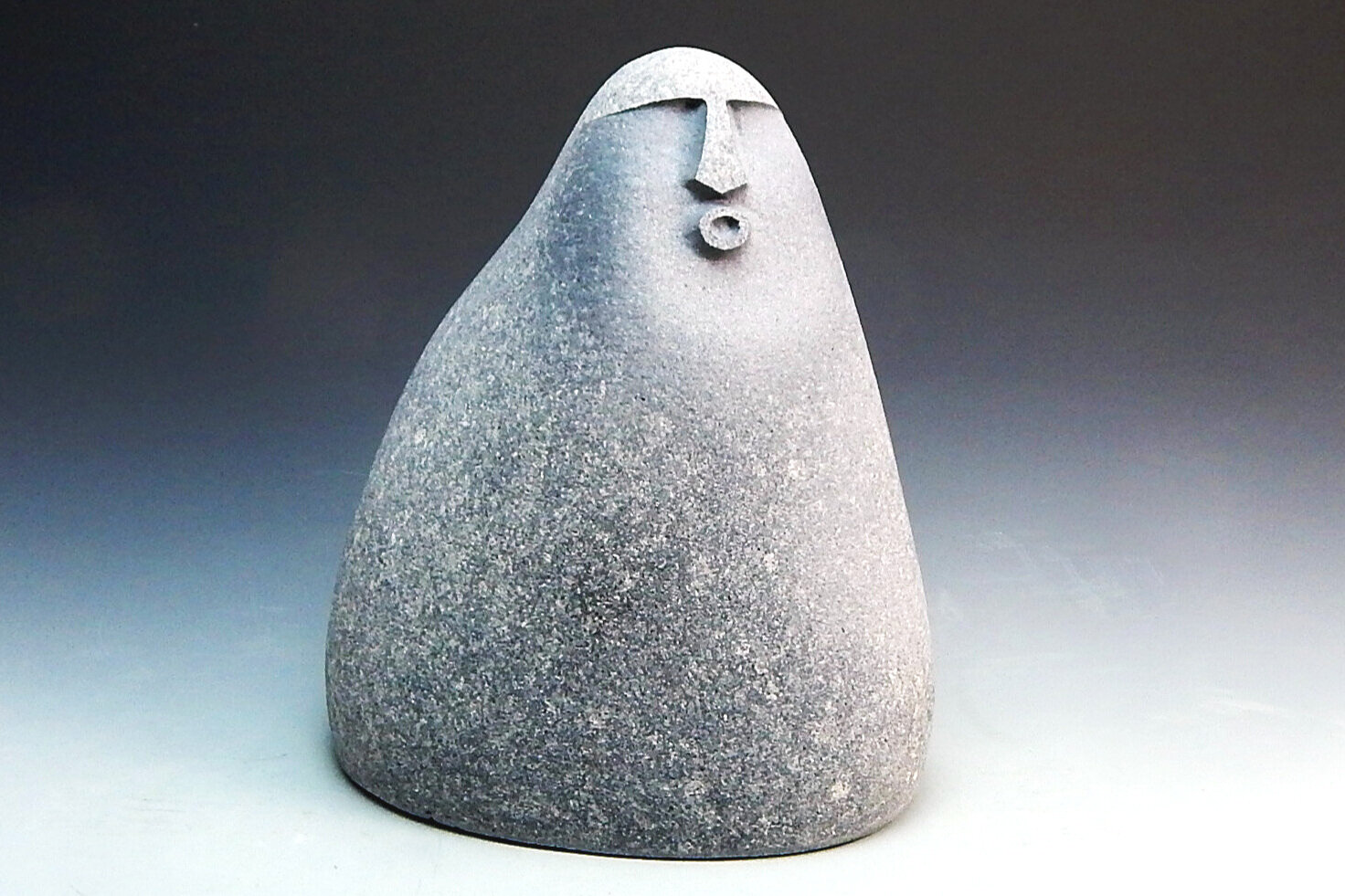 I pull the same face as that rock whenever this guy I dislike in my class speaks. I am mentioning this because he is speaking as I am typing this.

I hope you enjoyed reading through this article! As always feel free to like, comment, leave some feedback, or suggest a recipe you enjoy!

I'm a big fan of articles that include game mechanics so that they can be dropped into a world. This article is no exception-great work!   I'm wondering did you have anything particular in mind (1) if the shade manages to successfully kill someone, and/or (2) if someone were to try to release Mapashtimuva, by say casting Dispel Magic on the stone?

Thank you, I’m glad you enjoyed it!   Hmm, well if the shade manages to kill someone, their soul is sucked into the stone and Map will use them to strength himself (as such nothing can bring back that person).   Dispel magic on the stone wouldn’t do anything to affect it, because the time of magic used is too alien for such a spell to work. However efforts could be made to adapt it (time spent researching and experimenting perhaps).   I’m planning on writing an article about the mechanics I’m planning on using for curses, because I feel like what WOtC proposes is a bit underwhelming, so hopefully once this is done it’ll help clear one or two things up :D

Noticed a typo- I wrote “time” instead of “type” of magic!

Cool artifact! I like pieces of magic that will confuse and puzzle the party! Great Idea!

I'm sure they will, not immediately maybe... but with a cool mind, after the session is over, they will remind it with pleasure. Are things like this one that tends to become immortal in the talks of player, even ten years later, when life has taken somewhere else and they meet up again for a pizza and talk again like it was yesterday the last session.

"...he was able to bind the essence of a powerful Ikemo to a carved stone. (...) fearing for his safety Ismael discarded the stone in the wilds."   When you go for a stroll and think twice before claiming rights over some lost figure, ribbon, rabbit foot...   The statue is creeeeepyyy. And I can totally picture it an anime, literally jumping soundlessly behind the victim, peeking gently from just around the corner.   It also reminds me sort of of a River God from Sen to Chihiro no Kamikakuchi, before he was washed from the sludge and slime. Maybe it's the overall hunch-backness. :]

The world is so much more dangerous when people chuck their failed experiments outside, but thats what you get for not having a board of ethics supervising wizards :/   I'm glad you enjoyed the article! Loved reading your visuals, they are pretty spot on to what I was picturing myself :D

Hehehe, I'm imagining you pulling the face now.   I love the fact the curse is triggered by reading the inscription out loud. Of course any self-respecting adventuring party is going to read that out loud. XD   Great article, as usual. I love your world so much. I bet you're an amazing DM! :)

You should've seen the drawing I did to show my players what it looked like :') (think we spent a good 5 minutes just laughing about it).   Thank you so much for the kind words :'0 they really mean so much <3 I hope you're doing good! Sending some love :D

I think i'm safe since i'll never be able to pronounce the name properly anyway. on a serious note, this is really cool. I love the concept and will definitely hesitate to read any inscription out loud in the near future.

xD that is a pretty neat way of not getting cursed hahaha   And I'm glad you enjoyed it!! What sucks though is I keep forgetting my player is cursed so I never bring up the curse in game. Hopefully leaving this article open will help me next time...