Singing Constellations of the Astral Sea

The Najma Alrahjul rode a creature of the night. It descended slowly from the sky, body stained by a thousand glowing stars, swimming through the air with the lightness of a feather. Never in my life had I seen such a wonderful sight, such a fantastical beast.
— The Najma Alrahjul, unknown author (circa -200 I.A).

Star Whales are the soul companions of the Ketopsians, the two of them forming a single individual known as a Two-One. They emerge from the same Astehram as their other half, though unlike their humanoid counterparts Star Whales are born small and young, and must be tended to carefully in their first days. This charge is reserved to the Ketopsian linked to the Star Whale, though they are guided by the other members of the tribe.

Star Whales typically grow and reach their "adult" shape within the span of a few days, reaching lengths of almost 30 meters. Their bodies are made of star dust and pure energy, and they are more constellation come to life than animal.

Life of a Star Whale

Just like their Ketopsian companions, Star Whales need no food or water to survive. They are content to just swim across the wide open space, carrying their other half and singing songs to the stars.

Despite their size, Star Whales still know a few predators. Beasts beyond comprehension lurk in the deepest parts of the Astral Sea, where even the light dares not go. The careless Ketopsian will only realise they have entered the jaws of the beast when it is already far too late, dooming both him and his companion. 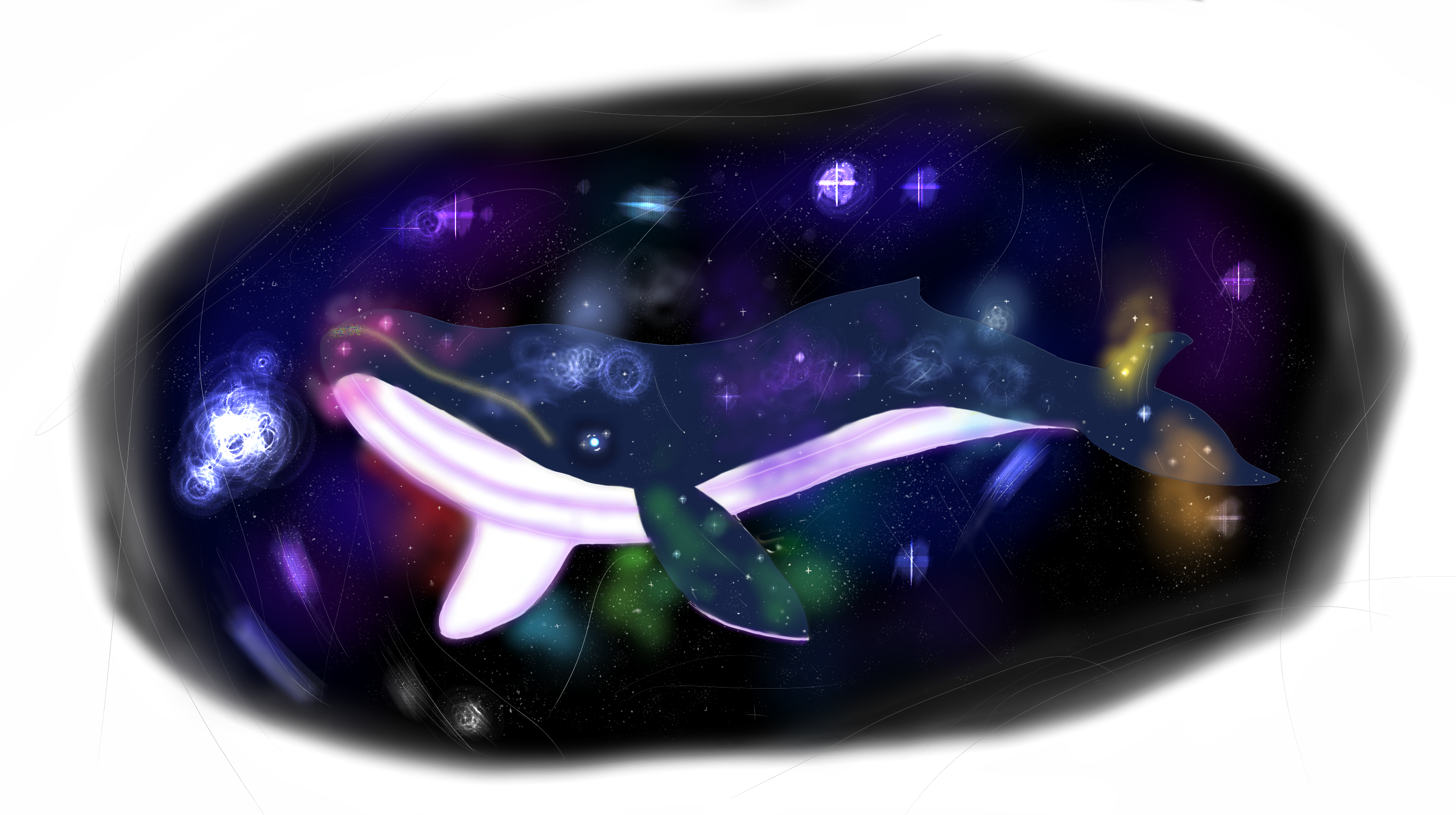 by Zoz, my lovely sibling

Appearance: Star Whales look as though they are made of stars and nebulas, shimmering and dancing beneath a thin layer of transparent skin.

Size: They average at about 30 meters long, though Ketopsians speak of the Mother of All, a gigantic Star Whale who birthed the world. Some interpretations even say her very body is the Astral Sea

Distictinve Markings: Each Star Whale is unique, and Ketopsians can always tell them apart. It is unknown what signs they base themselves on to do so.

The bond between a Two-One is sacred, and touching another's Star Whale, even by accident, is seen as one of the greatest signs of disrespect within Ketopsian culture.

This act sullies the bond between a Two-One, and the pair must return to the Astehram from which they were first born to clean themselves of the stain.


Song of the Mind

Star Whales and Ketopsians communicate telepathically, with a language called Ketopsi. It is a singing, melodic language made of hums and voice, that echoes deep within the mind of those who listen.

Each Two-One has their own distinctive melody, allowing others to identify who calls for them from the endless abyss.

All content copyright ©2020-2021 TC (the changeling), unless stated otherwise. All Rights Reserved. All pictures, unless specified, are from Pexels, Unsplash, Pixabay, or Wikipedia Commons. Flavour vectors made by Garrett Lewis - timespool.com

And one short article off my to-do list, way too many left to go! Hope you enjoyed this short piece of work :)

'Contempt' should be content. :D   I love the star whales so much. The taboo about touching another's star whale and having to go back to the Astehram from where they came is a really fun detail.   This culture is so great. <3

Emy caught the typo I was going to mention! But I also wanted to say: great work on both this and the Ketopsians article.

Woops, thanks for the typo catch Emy <3 ! And I'm really glad you like them, hopefully as summer comes I'll manage to pump out an article about an important Ketopsian character hehe