Epic of the Lovers

Some of you, if not all, may be familiar with the Epic of the Magic-Bringer, and notably the Betrayal of Samara. It is, after all, the most famous work of our era. But what you might ignore, is its lesser known twin tale- come close, and hear my story.
— Thayadur Al'Jemel

The Epic of the Lovers tells the story of Mahsati, a mortal musician of great talent and renown. She was fair and kind, her skills were praised and she played at the court and parties of the most noble amongst the Danatelian Lands. But she was unlucky in love, never able to catch the eye of those she desired with her heart.

So, the musician decided to seek the Goddess of Love, and ask for her blessing. Much of the journey she follows is the same as in the Epic of the Magic-Bringer. It was a long and perilous journey, every new step challenging her wits and determination, until finally she reached the Sea of Dusk.

For a week Mahsati paced back and forth through the realm of Gods, seeking Samara the Enchantress. She went to her temple, searched through the gardens, asked the divine attendants where she could find the Goddess. But none knew how to find her, and so Mahsati kept searching.

On the 8th night, as she lay exhausted against a tree, she pulled out her oud, and sang the woes that weighed on her heart. The melody danced through the heavenly gardens, until it found its way to the ear of the Goddess Samara, who happened to pass by.

The Goddess was entranced. She tried to find the musician who played such delicate notes, who could make nature sing with her, but the melody stopped too soon and Samara could not find the one who had captured her heart. The following night, the Goddess returned to the gardens, hoping to catch the melody once more.

Once again, the crystalline music elevated through the air, and the trees and plants sang with it. Samara followed the sound, quick and fast, until through the bushes of roses she could peer at Mahsati, playing her song. The Goddess was entranced by her performance, and as Mahsati prepared to leave, Samara left her place of hiding. 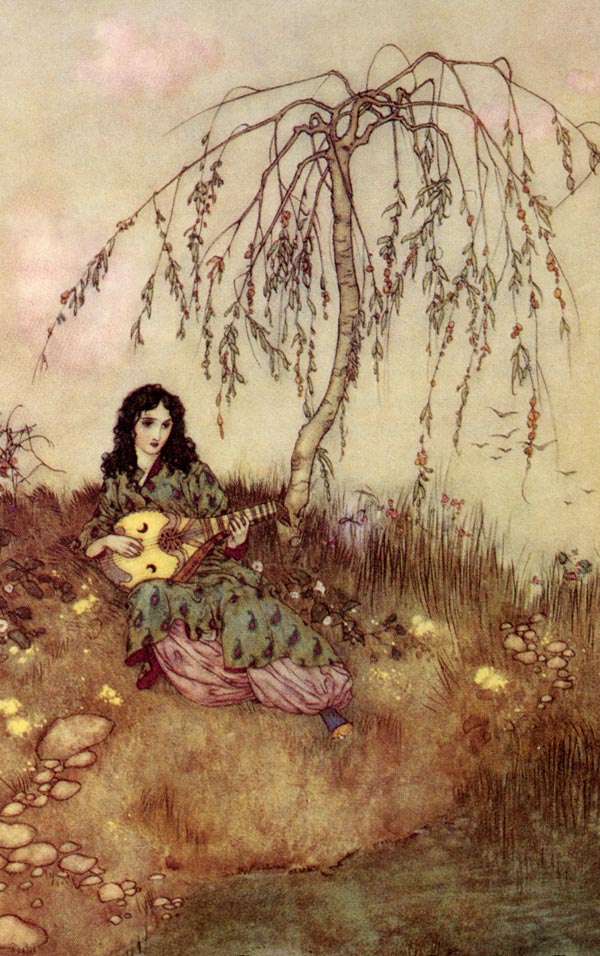 Mortal, I must know your name. Your voice has captured my heart, your words speak to my soul, my Ruwah has never felt love as strong as it does now. Please, follow me, let me take you to my home.
— Samara to Mahsati


And so they returned to the Goddess' domain, a beautiful house with a thousand interior gardens, filled with books and intriguing objects of all kinds. The whole while, Samara and Mahsati talked, and the musician explained the purpose of her visit. The Goddess promised her she would do whatever she could, and this is how Habayan came to be.

As fate would have it, the Goddess and the musician found themselves bound together, the Lovers Marks appearing on their skin and marking them as habibi. Samara was so moved by the events, that this day she forgot to work on her Weave, and it slipped out of the divine realm and into the world of mortals. That is how magic came to be, through acts of love and determination.
After having written the famed Epic of the Magic-Bringer, the Nasbarin Thayadur Al'Jemel wrote a second, much less known story. He never publicly acknowledge its existence, and only a handful of original manuscripts exist, hidden deep within the heart of the biggest libraries of Samara. Why its existence is kept a secret and why Thayadur never spoke of this work during his lifetime is a mystery. And if any answer exists, it is likely it died with Thayadur himself, buried deep in his heart, 6 feet beneath the earth.
Myths

I'd like to dedicate this myth to the one and only Qurilion, because I think he'd like it.

Thank you all for taking the time to read! I hope you enjoyed it :)

Ooof. That's some powerful stuff right there. My lord that final sentence has just the right amount of punch to it. I love that so much, the idea that magic was a mistake caused by nothing more than losing track if time with one you love. Masterful work!

This is a very beautiful myth. Great work :)

The played song gives the myth another dimension while it is read. I could understand why Samara fell in love with Mahsati.

The song is amazing, and I'm very glad it adds to the article! Thank you <3

I much prefer this myth of how magic came to be. Makes me happy. I wonder why the author wrote the second myth, and why he didn't publish it like he did the other.   (Yay for the Eurydice song!)

I think everyone prefers the second myth hahaha, I mean it is a lot nicer ^^ (and yay for the song :D!). Thank you for the comment <3!   Because Thayadur is a Nasbarin, my own theory is that either the goddess sent him several visions, or a single one he interpreted several ways. Whats for sure is that both epics were transmitted to him through dreams, but as to why he didn't publish it well... thats a mystery I haven't solved yet :')

And thus magic "became"--because love--is excellent. Great tale! <3 Perhaps the writer's heart was broken, and thus the truth of the myth too precious to release into the world at the time?

Thank you for the kind words <3   Thats a good hypothesis! I don't I'll actually ever find an answer as to why that version of the tale was never "released", it'll just be one of those unsolved mysteries (though I do have my own theory)