Magic, is a metaphysical phenomenon that can interact with all known types of energies and mass.

Individuals that can affect magic are known as Magic-Users or by a Category-specifc Name (such as Mage, Witch, or Sorceress). The procedure of affecting magic is known as casting.

Specific rituals or recipes with an immediate effect are known as spells while those that posses a specific trigger or are of primarily apotropaic nature are referred to as wards.

While the specific interaction between magic and a person still isn't understood, the overall process is.

All creation is filled with magic (also referred to as Flow) and there are streams or currents of different potential present. One or more individuals that want to produce an effect, couple with one such current and by "magic" excite the stream to achieve the required outcome.

There are many variations, combinations and procedures documented to achieve the same result.

Within the magic Flow, one or more streams of magic potential exist. The potential represents the overall Power a magic Effect can exert. Part of the complications of casting magic is to select a stream of appropriate potential.

A too powerful or not potent enough stream can lead to undesired and even catastrophic side effects. Trying to cast a spell that requires too much magic potential can break the magic flow and create magic dead zones.

Stating that Iverbent is built on top of more Iverbent is factually true after a fouled Wish created a Dead Zone right at Street Level, making it necessary to rebuild the Olivarian Seat of Power right on top of the old city roofs.

Can occur naturally but are exceedingly rare. Most dead zones encountered are created by careless magic users overexerting a magic stream.

Numerous experiments have been conducted to restore dead zones but not one was successful.

People are overcome with feelings of dread and despair in dead zone. It is assumed that this a natural warning sign present in all beings.

Even rarer than dead zone are natural wild magic zones.

How they are created is currently unknown, but a working theory is that draining weak magic streams in a flow with strong nearby currents can create a bowl (or dip) that nearby streams use to flow into, creating a zone in which magic effects are extremely potent.

The Cult of Wild Magic believed that children conceived in wild magic zones would be superior to any other beings.

Their belief wouldn't prove itself to be true.

Even the smallest imperfection in a spell can cause alarming secondary effects and most people are advised to stay clear of such areas.

Beings entering a wild magic zone experience feelings of restlessness and growing tension, staying for too long can cause euphoria and mental states similar to unbound rage.

While magic is universal, access to it can come from a great variety of sources.

This was the common way of accessing Magic before the Last Day of the Great Order. As the Process can't be studied today it isn't sure if Deities or other Powers were actually involved in the granting of access (as it is most famously depicted when the access is revoked) or if it was some subconscious reaction.

Today's religious Casters do access Magic through strong beliefs, this includes concepts like Valor or Peace. This process is nearly identically to the mental conditioning of Wizards but instead of investigating a wide variety of effects, religious Casters are specialized in the perceived Limitations of their respective target of worship.

Some of the most powerful Magic-users from the Age of Wishes where self-taught or tutored Wizards, spending many Years or even Centuries with the Study, Understanding and Experimentation of and with Magic. Concluding from what Study-Material is still available in the great Libraries today, this is still a valid albeit inefficient way.

The great power of a well-studied Wizard comes from her deep familiarity with a specific pattern. Casting for a Wizard becomes a reflex, akin to those of Sorcerers with the added Bonus of also understanding the Basics and Principles.

In comparison to Wizards, the Magical Talent for a Sorcerer is formed in the Womb with the Brain. They are natural Casters and do not need training for even the greatest of spells. Education for Sorcerers is almost exclusively about controlling inner Urges and suppressing Reflexes to prevent accidental casting.

You know you are in Trouble if you see an old Sorcerer become angry. Sorcerers that managed to be so extremely composed that they grow old without detonating themselves along the way are bad news.
— common apocryphal quote

The ability to cast can become spontaneously available to an Individual through many means such as life-threatening dangers or the pain of loosing someone dear. The most impactful magic effects ever recorded were cast from spontaneous Magic-Users. Most loose the Ability immediately or soon after the casting has finished.

Magic Theorists have almost completely agreed to use the "Cidian Tiered Magic System".

It describes Magic Affects by "Steps taken away from the observable Effect".

Additional Tiers are described but no consensus as to the definitions has yet been reached.

Many Philosophers and Magic-Users have thought about the apparent conscious Manner in which Magic often seems to behave.

Especially in Records of the Age of Wishes, Magic appeared to show a distinct sense of Irony and in some cases severe sadistic tendencies. Modern Magic in comparison seems to be, in the words of the great Thinker Timotomit: "Absent-minded".

Many historians attribute this difference in the unreliable nature of early historic documents and sometimes the very nature of the shattered History of Island Inquest. But even today, especially in cases of spontaneus Casting or in the Form of Wards, it shows a significant amount of intelligence and understanding of pragmatic context.

Magic does as magic is. If it was meant to be understood, we'd call it finances.
— Simon Priest, renowned Bard and Entertainer 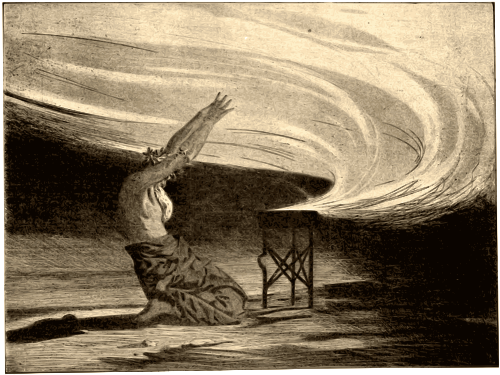 Depiction of a priest affecting the wind through prayer.

While Fireball (or it's smaller cousin Firebolt) come to mind when thinking about bestselling Spells, the Charts as reported by the Daily Black Board are:

In 1878 a drusseodian Man got fined 182.003,- Emporikes for casting Minor Light repeatedly into the Bed Rooms of twelve Households for a period of six weeks to, by his own account: "Stop them from doing the wassname. The thing!".

No one knows who created Ublimade

Ublimade, marketed as "Liquid Taste-Better" is not a Potion but the extract of a magical Herb found on the western Shores north and south of the Sofrantosti mountain range.

According to company president and inventor Theresa Uniyalat: "It was just there one day. And now it's a patented secret."

So good! I absolutely love the sidebar and Sorcerer quote in particular :D

Thank you so much for your kind words!

I love this article! I'm a big fan of science fantasy and magic approached in a scientific manner and your system is very cool. And in this article you've managed to present all that information in a clear way while also showing a nice dose of humour.   I like the names of the "favourite spells".   I like the anecdote about Iverbent being rebuilt on top of the ruins. Can the ruins maybe still be accessible below? That reminds me of a story I read where it was the case and demons were secretly operating under the city, it was very creepy.   I love the idea of magic having a sense of irony XD

Thank you very much for your friendly words, it means a lot to me! :D   I am currently working on the Article about Iverbent that will answer your Question, right after I have implemented the proposed Changes and Tips from the Stream today!   I saw that you have followed my World, so you will get a Notification when it will be available in a Day or two :)