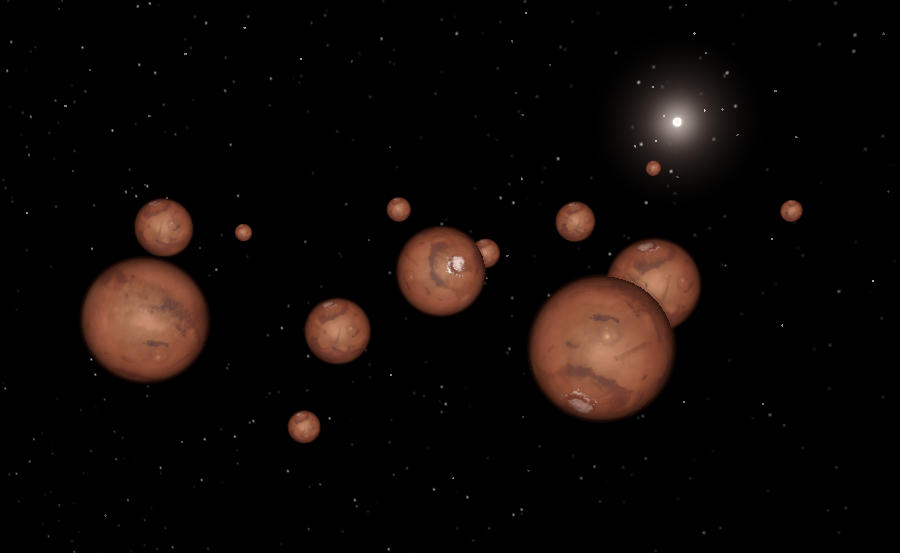 Mars has become an infinite chain of every possible Mars from the multiverse. The first mars we know of was inhabited by humans from Earth, in the time before. Through unknown events, a group of politicians, spearheaded by a man named Jim Haynes, and assisted by a mysterious man calling himself Schtornz, caused the great fracture. The exposed core of the planet caused radiation poisoning, nuclear winter, earthquakes, and all other manner of natural disasters.   The next thousand years were marked by war. An ambitious project called Operation: Multiple Mars was led to try and ease the suffering of the remaining Mars Citizens, by using matter from the solar system to create copies of Mars for refugees to live on. During this time, the discovery of new races, as well as the expansion of the people of Mars led to unrest. A misplaced bullet out of time causes a war for the ages. 1000 years of bloody conquest and confusing time shenanigans later, and the First Republic of Mars was formed out of a hastily passed treaty.   A dark time for Mars, the rule of The First Republic was oppressive to its people. The upper class used advanced science, tech and weaponry to lead an inquisition against the lower class. Entire races were culled away to create cyber-armies.   After the lower class rose up in resistance led by the Dino-people, Mars rose to great heights. Time travel as discovered, and all seemed well until the Time Institute was bombed by terrorists. This led to another era of inquisition, this time by the Dinos, and another drowning of knowledge.   The dinos were conquered by an invasion force from Earth, aided by the Prismatons this time. and through an ascension beyond mortality and dimension, the Prismatons found a world out of time and space called Last Mars.