The Yuan-Ti are a race of serpent-like beings native to the northern jungles of Arcanus.  Yuan-Ti, though not malicious, see other species as beneath them.  Though an ancient race, their disposition to outsiders have caused them to not branch out of their ancestral homes.    In Yuan-Ti culture the more serpent-like a person the closer they are to their god "Tiphon". This has led to a culture where breeding is seen as a religious ceremony in which new Yuan-Ti are bred not for family, or population, but to breed the perfect vessel, an avatar of Tiphon itself.   Yuan-Ti culture has a very strict caste system with the purest most serpent-like Yuan-Ti, known as "edonakxwet" or "one with god" at the top. Only those of this caste are allowed to live in the Yuan-Ti capital. Yuan-Ti of lower castes live in groups surrounding the city. Those of the lowest caste "Jsu'cocoj" or "Scaleless" are often traded as slaves or made to work the fields and other menial tasks. 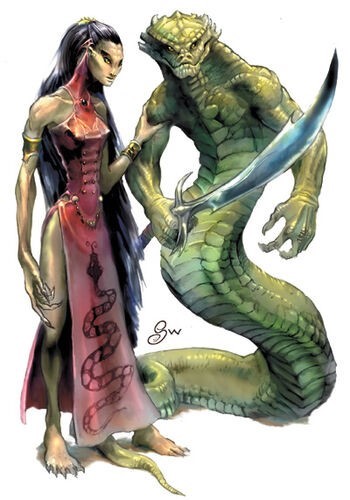