(Note: This entire tavern is designed for use with Heilanna's Guide to Monster Hunting)   In the Monster Lands of Hodos, in the largest of its few towns, rests the Huntsend Tavern. It is home to monster hunters of any skill from legendary slayers to the lowliest of giant rat hunters. The unique food the chef makes from the area's monsters is renowned for its taste. The tavern is always full of colorful characters from the barkeeper Prisa to Mistis the lizardfolk barmaid. There are trophies from monster hunts all over the tavern, Dragon heads and minotaur horns litter every wall and shelf. The bar serves all kinds of drinks such as the famous Trollblood Ale, an expensive drink that can quickly heal your wounds.

From the outside, the tavern is a massive three-story building made of mostly stone with a roof made from dragon scales. You enter the tavern via a large bronze door nearby to the door is a hanging sign that depicts a red dragon's head being impaled by a sword. Once you enter, you would see a large eating hall lit by continual flame spells. The hall has many tables with adventurers sitting at them, including a large, twenty-four seated table in the middle of the room. All across the walls are random trophies from monster hunts such as mounted heads or horns and paintings of legendary monsters. In the back of the room is a fireplace with the sword-impaled head of a red dragon mounted above it. The sword once belonged to Prisa but while slaying the dragon it got stuck, not magically stuck but no one has been able to remove it yet. There is an ongoing challenge with a hefty reward for anyone who can pull the sword out of the dragon's head. In the corner of the room is a large stage with a chair where a bard, often Dianne, might play. On either side of the fireplace are stairs that go up to the second and third floors. The bar rests on the left side of the room next to a giant wooden job board. Behind the bar, a door leads to the kitchen. On the right side of the room are two bronze doors. One leads to a workshop and store, the other leads to the bathroom. Up the stairs, the normal rooms are on the second floor, and on the third floor are the fancier deluxe rooms, with a double bed and included bubble bath.

Prisa Laode (CG Female Protector Aasimar) Prisa Laode is the owner and founder of the tavern. She is a former adventurer that retired and now runs the tavern and mixes the drinks. 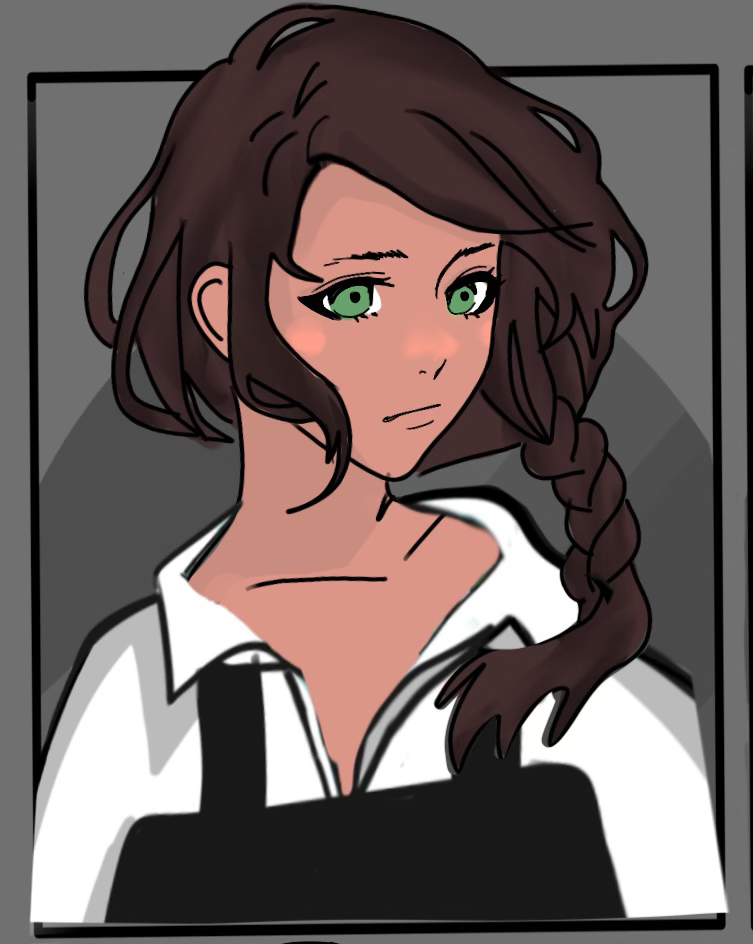 by Madison Kairalla
Mistis Laode (CG Female Lizardfolk) Mistis was adopted by Prisa after Prisa found her staving in an alley having already given up on survival. After being taken in, Mistis grew up to help out around the tavern as a barmaid. 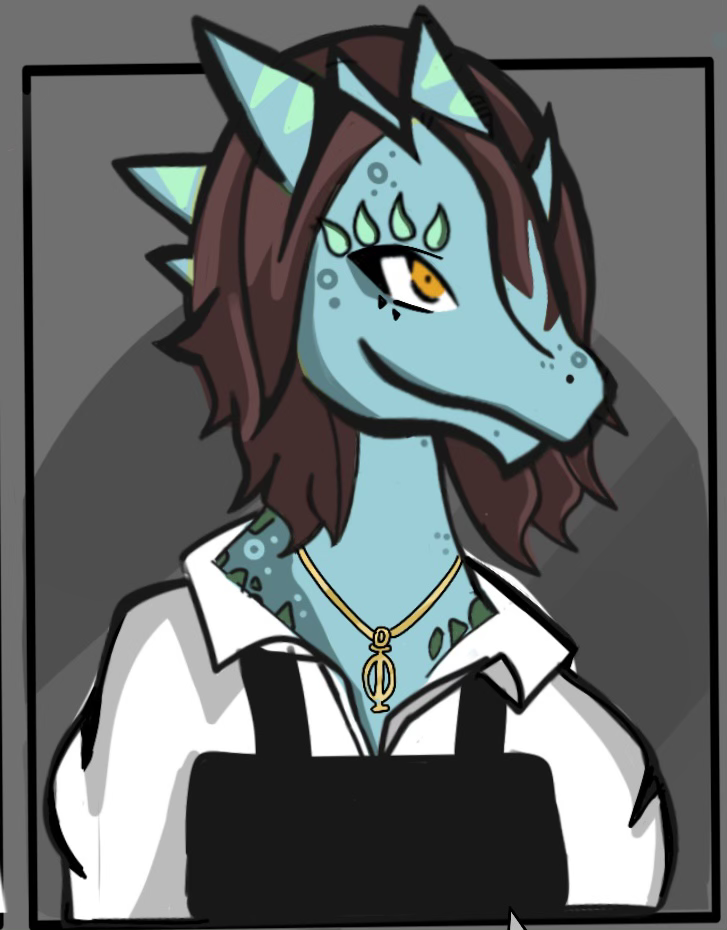 by Madison Kairalla
Chef Caro (NG Male Human) Due to being hopeless at cooking, Prisa hired Caro to cook for the tavern's guests. He accepted and thoroughly enjoys the opportunity to cook with exotic monster parts. 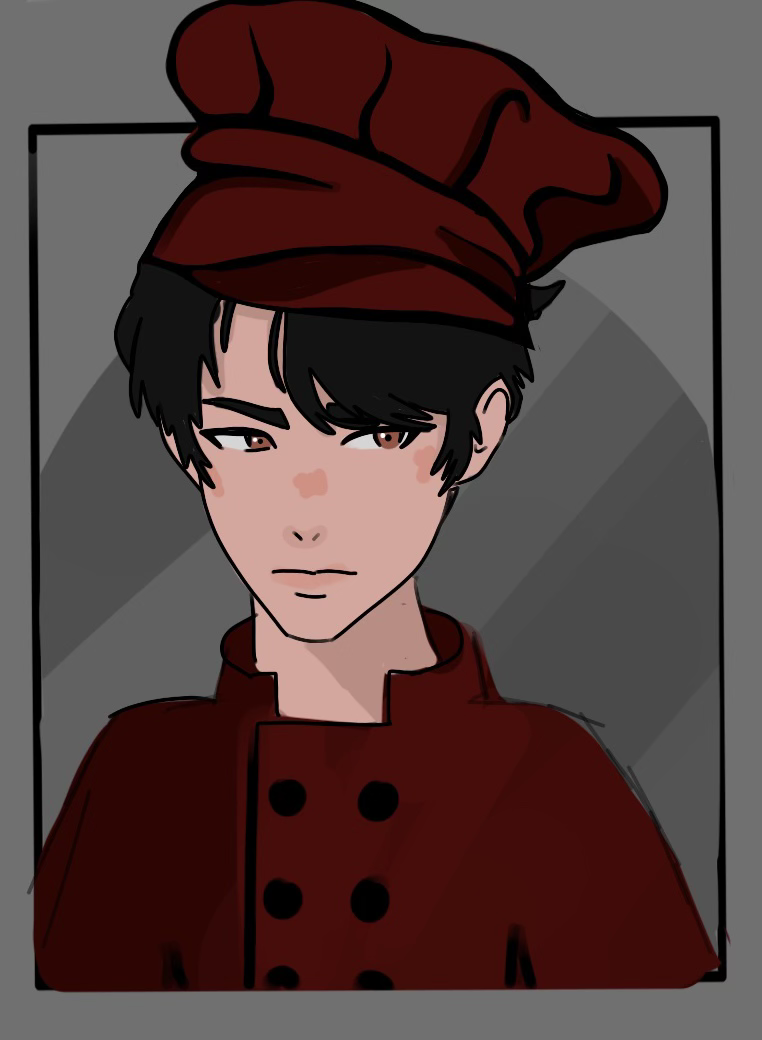 by Madison Kairalla
Zamethein (Neutral Male Hobgoblin) Zamethein is a talented craftsman, who is not half-bad at enchanting. Before working for Prisa, he used to make weapons for a goblinoid host but after it was disbanded he found his way, by chance, to the Huntsend Tavern where his skills were sorely needed. 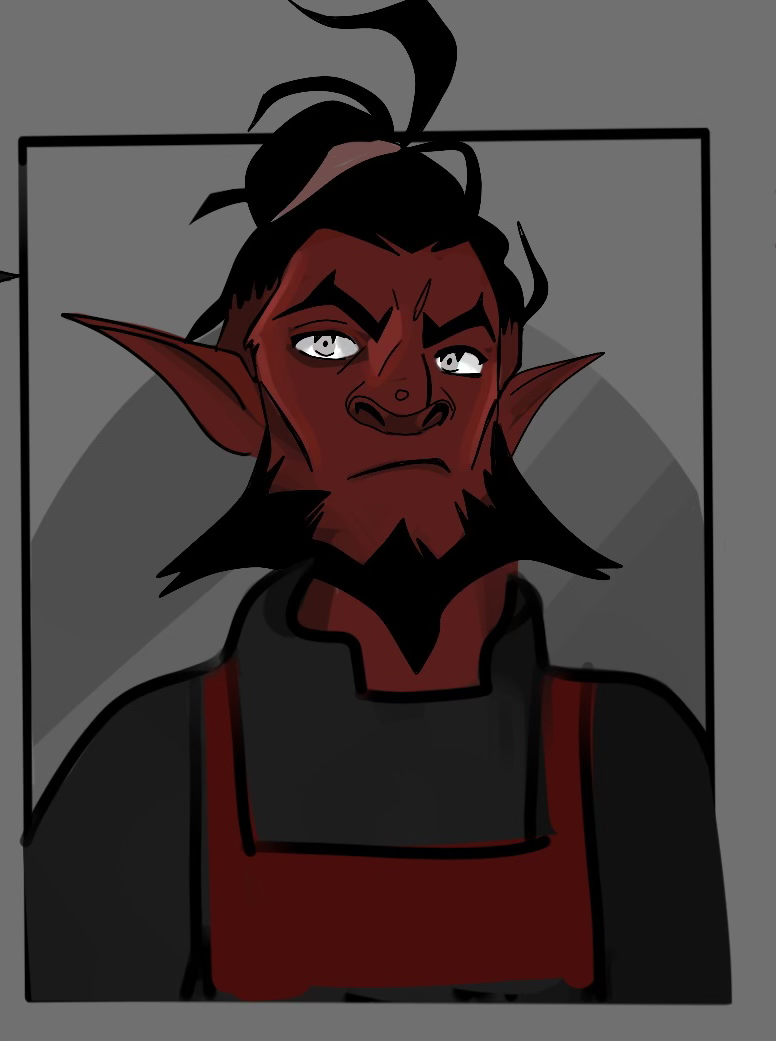 by Madison Kairalla
Tala Hasapis (CG female Elf) Tala Hasapis is another of the barmaids. In her free time, she performs many experiments with biomancy. Her latest experiments have allowed her to create unique familiars out of monster parts such as her own polyhedrooze companion. On an unrelated note, any strange effects you may or may not experience after a drink at the tavern are purely a coincidence and have nothing to do with biomagical experimentation. 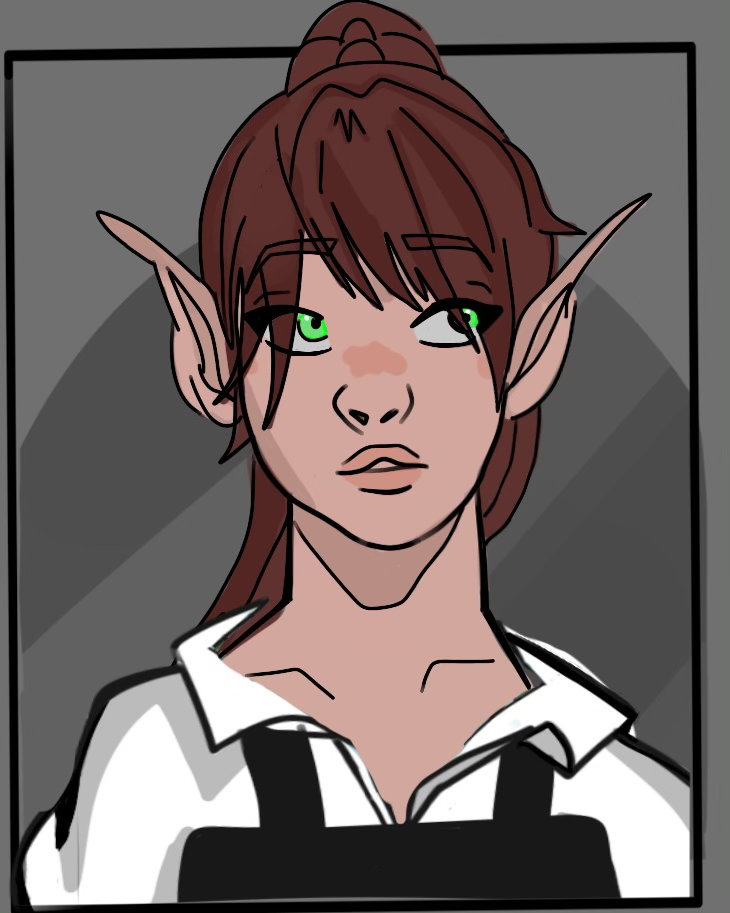 by Madison Kairalla
Thea Lorecheon (NG Female human) Thea is a friend and former party member of Prisa. She is a famous author of many books, some of which are tales of her adventures with Prisa and their friends. She is currently at the Huntsend Tavern to research her new book. 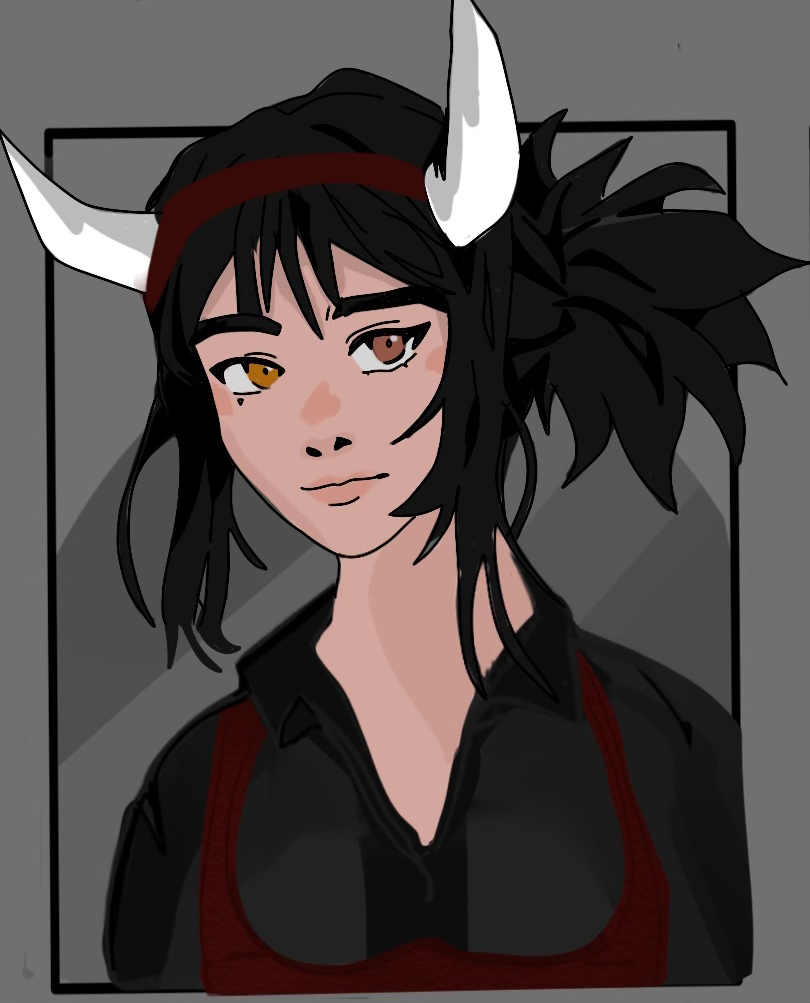 by Madison Kairalla
Dianne (CG Female "Human") Dianne is a bard and while she does not technically work at the tavern she likes hanging out there. Dianne certainly plays her lute enough to be considered staff. Dianne is super friendly and is eager to talk or make friends with just about anyone who walks in the door however, she seems to avoid Metem like the plague.   Metem (unknown Male Unknown) Metem is a masked figure who rarely speaks to anyone. Because of the solid white mask with no holes, no one knows exactly what Metem's race is but he is about "human"-sized. In typical rogue fashion, he likes to sit in the darkest corner of the tavern. He isn't particularly friendly, people suspect he hates Dianne as he is always gone when she shows up.   Chimor (LN Male Human) Chimor also does not actually work at the Huntsend Tavern but stays there a lot. He makes his money selling his wares to any of the guests at the tavern... or he would if a large goblin tribe was not blocking his trade route cutting him off from restocking his products.   Gishi Algero (LN Male Halfling) Gishi is a middle-aged looking man dressed in farmer's attire that comes to the bar every night looking quite frightened always glancing around as if to check if someone is following him he always sits silently at the bar and when he is done with his drinks he quickly leaves according to prisa he has been having some trouble at the farm   Sarth (CN Male Githyanki) Sarth is an astral ship captain that recently lost most of their crew to an astral dreadnaught they were hunting the remainder of his crew abandoned him so he is in need of a crew including a spellcaster to help him finish the hunt   Eluss ortem (CG Male Demigod) Eluss is a demigod of hades sent on a mission by his father to capture some rouge spirits they are looking for some adventures to help them out   Kazuki Takahashi (N male Human) this man is a highly skilled summoner he has come to the monster land to hone his skills and fight a worthy opponent to which he will grant his summon disk to

The tavern was built by Prisa Laode to house the monster hunters that help this town prosper.

Around 3 years ago the workshop was added so that Zametheian, who had just been hired, had somewhere to craft the weapons and gear he sells. Over the years a lot of magical defenses and wards have been added.

The tavern uses bronze for the doors and most of the walls are made from granite bricks with oak wood bracing the roof. The roof is actually made from the scales of the very same ancient red dragon whose head has been hung above the fireplace inside that was killed by the tavern owner while she was an adventurer.

The roof of the tavern is made of red dragon scales that protect it from most attacks from above and the walls are reinforced with magic wards. Nothing short of a dragon can destroy this place and all else failing, it is full of heavily armed adventurers.

The tavern was built around 20 years ago by Prisa Laode after she retired from adventuring. She decided to set up a tavern to help the next generation of adventurers have a safe place to find rest and high-quality gear. After a year, Prisa found that she was not a great chef so she hired Chef Caro to make the food. Around 10 years ago she found Mistis as a starving child sitting in an alley and took her in. Most recently, Prisa hired Zamethein to craft and sell weapons and armor to guests.

Due to its location in the Monster Lands, most of the guests are monster-hunting adventurers. However, some of the some are travelers just passing through, merchants who like to sell to the adventurers, as well anyone who visits for the fun of the tavern itself. Everyone who visits can expect to hear grand tales of monsters destroying towns and being stopped by powerful adventurers and see all of the many trophies that adorn the walls. People also come to enjoy the taste of exotic dishes made from monster parts or buy weapons made from such parts. Guests can eat meals and drink brews, mundane and magic alike, and relax in the evening with music from Dianne the bard or maybe just play a game of darts.   (character portraits and tavern header image are by Madison Kairalla)
Information:
Founding Date
Around 10 years ago, after the slaying of an Ancient Red Dragon
Type
Pub / Tavern / Restaurant
Owner
Prisa Laode
Characters in Location