Across fog-shrouded coasts or endless ocean swells, an ominous drone sounded on a conch shell chills the blood of all who hear it. This is the sound of the sahuagin hunting horn — a call to raid and battle. Coastal settlers refer to sahuagin as “sea devils,” for sahuagin have no compassion in them, slaughtering the crews of ships and decimating coastal villages.

Sahuagin are a predatory, piscine race that ventures from the ocean’s black depths to hunt the creatures of the shallows and shore. Though they dwell in the deepest trenches of the ocean, sahuagin view the entire aquatic realm as their kingdom and the creatures in it as blood sport for their hunting parties.
The self-styled rulers of sahuagin ocean domains are massive mutant males that grow second sets of arms. They are terrible foes in battle, and all sahuagin bow down before these powerful barons.
Sahuagin worship sharks and other large predatory fish. Only female sahuagin are deemed worthy of channeling the shark’s power, and priestesses hold tremendous sway in sahuagin communities.
Sahuagin are driven into a frenzy by the smell of fresh blood. As worshipers of predators, they also have a special kinship with sharks, which they train as attack animals. Even untrained sharks recognize sahuagin as allies and don’t prey on them.
The sahuagin might control the oceans if not for the presence of their mortal enemies, the aquatic elves. Wars between the two races have raged for centuries across the coasts and seas of the world, disrupting maritime trade and sometimes drawing other races into the bloody conflict.

With a vaguely humanoid appearance, these oceanic hunters also share many traits with fish.
While different tribes can vary immensely in coloration, and even some other traits typically a Sahuagin will have two arms, two legs and a short but muscular tail.
Some, known as "Barons" also have an additional set of slightly smaller arms located directly below their original pair.
Many also have long, eel-like fins running down the length of their backs and tails, or fin-like structures on the sides of their heads covering gills.

A female sahuagin will gestate her eggs internally for 3 months after conception.
After 3 months she will lay a clutch of 3 to 4 elongated, leathery grey eggs.
Each egg is 7 to 8 inches long and 3 inches wide.
Eggs, if kept in a warmer place, will hatch in 4 months.
Hatchlings will immediately begin to fight among themselves, attempting to eat one another. This is especially prominent if one hatches long before the others (Setting upon it's un-hatched siblings while they are defenseless), or if one is born weak or otherwise crippled.
Any offspring that survive this process (usually 50% of those hatched) are raised comunally by the tribe.

Sahuagin can swim and hunt immediately from birth, and reach full size within a year.
They typically reach breeding age by 3 years of age, and can continue to breed until they reach 14 or so.

Living in tribal groups of 20 to 100 members, Sahuagin are usually led by a Baron, as well as 1 to 10 Priestesses.
Tribes focus almost entirely on hunting and blood sport, these things are seen as the best way to provide for and train the tribe.

As worshipers of predators, they have a special kinship with sharks, which they train as attack animals.
Even untrained sharks recognize sahuagin as allies and don’t prey on them.

They speak their own language, known to outsiders simply as Sahuagin.
Some do learn Common or Aquan.
Very rarely, others may learn Elvish or Sylvan.

Most Sahuagin believe they are descended from Sekolah, the Mother of all sharks. This ancient predator was rumored to be a massive and ill-tempered megalodon, though there is no evidence that this creature ever actually existed.

Sahuagin have few allies, as their aggressive tendencies and willingness to kill and eat other sentient races often leaves them at odds with other species. 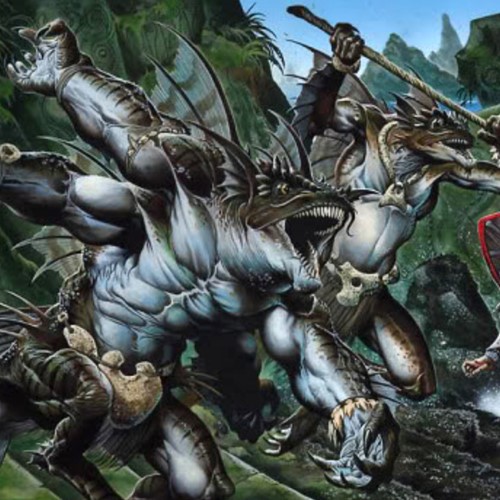 Scientific Name
Cogitemus Hominis Pistris
Lifespan
10 - 15 years
Average Height
6 ft.
Average Weight
200 lbs
Average Length
7 ft.
Body Tint, Colouring and Marking
Sahuagin are usually green-skinned; darker on the back and lighter on the belly. Many have dark stripes, bands, or spots, but these tended to fade with age.
Females develop specks of yellow or orange on their tails, which would grow in number until the whole tail was of a deep mustard yellow color. At that point, the female is no longer considered fit for mating.