Breja Wolfheart (a.k.a. The Huntress, She-wolf)

Even though she leaves an active and cardio rich lifestyle, Breja's figure is curvaceous and womanly with wide hips and a round ass. Her bust measures in at a boastful 38E.

She has a wolf paw tattoo on her left shoulder blade and a tribal tattoo of her former werewolf clan along her pubic mound.

A social oddity as well as a physical quirk Breja is a south paw favouring her left hand over her right.

She is learning to master her beast blood and is able to turn to a werewolf at will. However every night  without fail between the hours of 8 and 10pm she is forced to wander the realm as a werewolf, the length of time is determined by the phase of the moon. On a full moon she is forced to remain a werewolf until dawn, however a new moon sees her transform for just a few hours before she is able to willfully revert back. One thing is clear though, for as long as she is cursed with Lycanthrope, she will transform at night.

Call of the Hunt

Years of hunting have trained Breja in optimizing her skills with a bow and arrow. Recently she decided to switch to something with a little bit more punch when she stoped hunting game and started hunting vampires. Favouring a her fathers old crossbow over the more traditional hunting weapon.

Formerly a hunter Breja now earns gold as a vampire slayer. She is also known to take other odd jobs from time to time, to keep herself occupied in between jobs.

The loss of her husband has driven her to a seek out and purge the realm of vampires and their ilk. The trauma of his loss hit her hard and Breja can still see him, from time to time, in her minds eye. She talks to this manifestation of her husband whenever she is in need of guidance. Choosing to remember him how he was before the incident that ripped him away from her, Hadvar's ghost as she believes him to be serves as Breja's conscience and the only thing keeping her from fully turning into a feral werewolf.   Her beast blood is constantly at a simmer, ready to boil over at any moment, as a result she is quick tempered, and can become across as hot head. The heat coursing through her veins also leaves her uncomfortable and prevents her from getting a restful sleep. She suffers from constant headaches, and other pains as well, due to the swelling and rearranging of her body whenever she transforms.   To compensate for the lack of sleep she-wolf finds herself closing her eyes whenever possible, in hopes of dozing off, even if it is just for a minute.

The loss of Breja's husband hit her hard. She has sought a personal vendetta against the undead particularly Vampires. She hopes to see the end of all who possess vampiric blood.

When Breja loses herself and transforms into a werewolf, her primary motivation shifts from revenge to feed her hunger for human hearts.

Being part wolf has its ups as well as its downs. Her vision improved tremedously when she became a werewolf both during the day, and at night, but her vision was not all that improved. Breja's sense of smell also doubled allowing her to sniff out potential prey and use her nose to sense the presence of those around her.   Years of hunting has been augmented by her wolf like senses and allows her how to track down and prey upon the most vigilant of victims. Even the most elusive of vampires find their throats between her jaws eventually.

While she was once married to a man named Hadvar, Breja has always been infatuated with women and considers herself Bi-curious. Now that she is widowed she has become more open to exploring her sexuality -when her wolf blood allows it.   Her wolf blood also periodically leaves her insatiable as if she was in heat at times. These nights while rare are rather frustrating to the she-wolf as she more often than not leaves unsatisfied by her partners lack of endurance.

The love of Breja's life. They met hunting while tracking the same buck. She had nearly killed him when accidentally stepped on a dry twig and she fired her bow in his direction. Shortly after meeting Breja knew she would marry the man, and six turns of the moon later, they were wed.   Theirs was a happy marriage that had almost lasted five years. During the end of the fourth year, Hadvar began acting strange. Disappearing at seemingly random hours of the night, and pale as snow when he returned. They began to argue more than they had in the past, Hadvar's patience had become non-existent and Breja had no idea how to appeal to her husband. She missed him, even when he was beside her he seemed distant as if leagues away. It was not until the end of the fourth year that Breja discovered the truth. She followed her husband to a secluded cave not far from their cabin in the woods, and watched as he embraced a tall slender woman with glowing scarlet eyes and flowing silver hair. Feeling both betrayed and heart broken by her husband's actions Breyia turned to leave when suddenly she overheard the woman speak. Her voice was as sooth as her porcelain looking skin. While she could not make out the words there was an unnatural warmth to her tone, that also felt cold. It was not until the mistress wrenched Hadvar's neck to the side  and bit into his neck that Breja realized that he was not cheating on her but rather being used for food.   She does not remember what happened next. One minute she had been starring in horror as her husband willingly gave up his lifeblood, and the next she was waking up in an entirely different cave her head throbbing as if she had been hit in the head.

It was here she met a man whom only referred to himself as the Alpha. A lone wanderer that watched Breja enter the vampire lair and against his better judgement decided to try and rescue her. Alpha promised to grant Breja the ability to fight the Vampire without worrying about succumbing to the vampires disease if she promised to join his pack, and follow him after.  Breja hesitantly accepted and it was then that Alpha cut his hand and dripped his blood into a chalice. "The blood of the wolf" He called it as Breja started at her cup dubiously. Not having anything to loose anymore Breja drank deeply from the blood filled chalice and began to feel her blood once again boil with rage. This time however it was not rage she felt, but the blood of the wolf rewriting her DNA, and replacing it with that of the wolf. Pain permeated throughout her body, and Breja passed out. Hours later when she awoke, the pain had subsided but she was filled with a hunger that she had never felt before. She had embraced the blood of the wolf and through Alpha had became a werewolf.

Wolf is a common wolf that was separated from his pack, he has been her partner for a while now, and the two have become inseparable. The bond between them is strong both when she is human, and when she has transformed.

Breja has the social aptitude and tact of a wolf. She does not care for other peoples feelings, or dancing around the bush. She is straight forward and honest, almost to a fault, but only when it comes to topics that do not involve her past.

Breja does not care for small talk and tends to lose interest in a conversation that is riddled with it. She prefers actions to words.

A few moons ago Breja encountered a lone wolf that had been separated from his pack. Half starved and angry the wolf tried to attack Breja, only to back off when he picked up the familiar scent of a fellow wolf.  From then on Breja and the wolf that she named just that, wolf, hunted together both.

While that part of her life is behind her Breja still goes on hunting trips whenever she can, to remember her husband Hadvar.

Born to be Wild

With hunting also comes her other favourite pass time; Camping. She used to joke with her husband that she must be part wolf as she would rather sleep under the stars then in some house with a roof.

Breja and Hadvar met on a hunting trip when Breja accidentally shot Hadvar with an arrow when they were hunting the same buck. Breja quickly took Hadvar back to her camp in the woods where she nursed the him back to good health. While he was a little distrusting of her given the circumstances of their meeting, over the course of the year the two began to fall in love, and eventually they married in the same spot where they had met.    Their marriage was a happy one, until Hadvar began sneaking out at random hours of the night, returning home haggard and drunk the next morning and sleeping well into the later parts of the day. After weeks of this Breja's suspicions finally took hold of her and she followed him. It was on that night that she lost her husband.

While Hadvar was still alive there was not a day where the two did not spend time in the woods, hunting and camping. Breja used to joke that they should have been born wolves as they both preferred to spend their nights under the stars, rather than under a wooden roof.

Unbeknownst to the rest of their kin, Hadvar never died. He instead had become enthralled by a vampire named Virra Bloodletter, who seduced and turned Hadvar into one of her willing servants.    Likewise Hadvar is one of the few individuals still alive that knows Breja's secret of being a werewolf, after she tried to kill his mistress of the night by transforming into her beast form in front of them. She was unsuccessful and Virra and Hadvar escaped into the darkness never to be seen again.

Most of her wealth has been amassed through odd jobs she picks up, while not rich she is able to afford lodging on nights that she wishes to spend indoors. 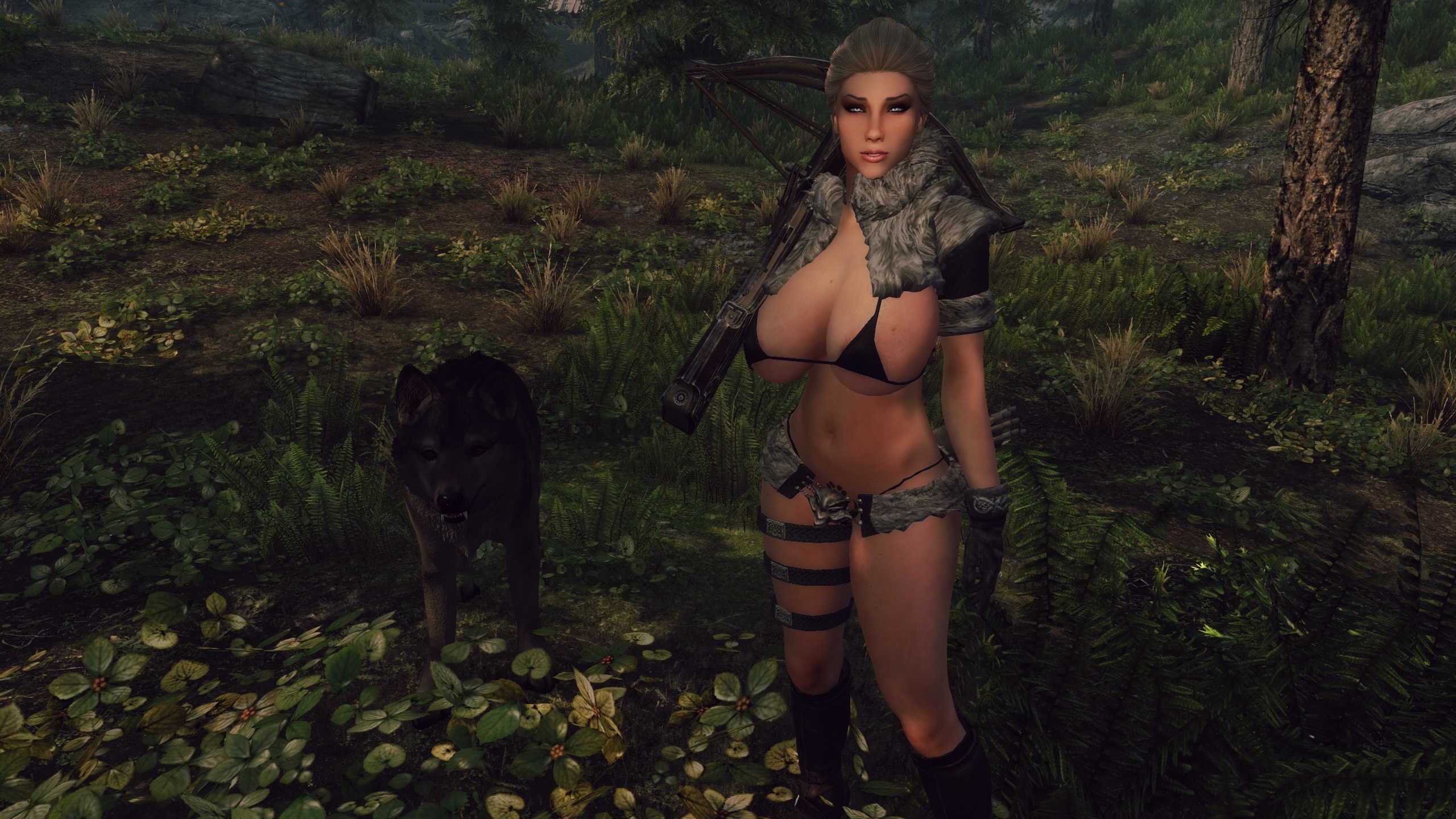