Overtime is the personal ship of Hahshih Vah— a Vulin Duster who frequently aids ihuah who are being hunted by Senior Employee Retention Specialists in escaping their isolated homeworld.

If found before she can escape— Hahshih must often fight SERs and other law enforcement, with this in mind— she has swapped the ship's original short-range laser cannons with less deadly EMP launchers.   These allow her to disable the vehicles of her opponents and escape, without traumatizing her passengers. 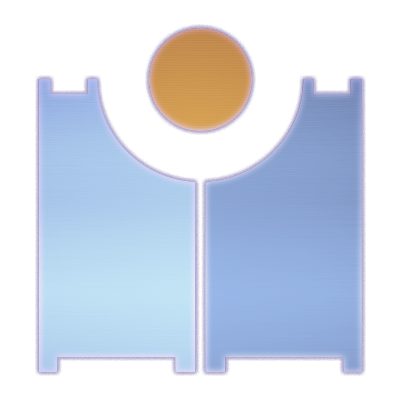 by Garrett Lewis
Overtime is a lightweight spacecraft meant to carry no more than three people, alongside a small cargo bay at its back end. The ship was originally issued to Hahshih during her employment as a Senior Employee Retention Specialist— SER for short. As such, it is fairly utilitarian in design, and was originally designed to evoke fear in any runaway employees the ship would descend upon. However, over the years, Hahshih has gone to painstaking lengths to create the opposite effect— a ship that welcomes those who see it.   The ship's original pyramid shape has had all of its sharp, angular edges beveled. The red and yellow paint on its exterior has been replaced with blue and white— and its myriad harsh red lights replaced with soft yellows. The ship's name is proudly displayed along the bottom of each side in soothing yellow stencils. At the back, flat end of the ship, the harsh, sharp rectangular frame of its thrusters have been replaced with circular ones, lined with a golden finish. In place of piercing red streaks left in their wake, they now leave a calm blue trail that almost dances in the air behind them.   Even the ship's interior has been completely renovated— from imposing black and red metal, to soft white and blue leather. The radio that once endlessly played advertisements instead plays soothing music, calming the mood of not just those she rescues— but also her own. Most notably, however, is the fact that the ship's interior now lies completely upside-down in comparison to its original state. Rather than fly with the pyramid's flat top facing towards the sky— greeting those on the ground with the sharp point below— Hahshih pilots the Overtime with this flat side facing the ground.

I'd heard stories— but never fully believed them. Caught between a SER and a cliff I was honestly weighing both options— until that pyramid rose from behind me. I've never been happier to see a ship in my life.
— An escaped ihuah

I really like the details of how the ship has been redesigned from its original state to be less imposing, and I love that it now flies upside down to the original intent. I think the fact that has been changed from an implement of fear to one of hope is what makes it most interesting.

Thanks! It was fun to try and come up with.