Thus far in I've only ever run TTRPG campaigns on one of the continents in my world, Gardemoor which means it is the only continent that's really fleshed out. There is still a lot to be done there, but the time has come to expand my continents of Akroasia and Cadenar. I have several ideas to work with, cities, landscapes, people and their culture, the only thing missing is putting it all down on paper (digitally).

Cadenar I figure will be my take on what would happen if different nobility in the Holy Roman Empire each made their own colonies in the Americas. But - oh no! - the Americas is already full of dragonkin. A whole bunch of rich Renaissance Europeans making city states in wild lands filled with new dangers.

Recently I also started working on expanding the lore related to my world's two moons and their related goddesses, Ies and Jiana. I am hoping at least a couple of the prompts will allow me to work on these hellish moons of fire and ice as my to-do list is filling up with things I need to add.

I really look forward to seeing where the summer camp prompts will help me add to my world.

Motivation number 1: I love worldbuilding, and that is really all that matters. But I have other reasons as well. I've been planning a D&D campaign on Cadenar for a couple of month now, and I find that the more worldbuilding I have before starting a campaign, the easier DMing will be. And as of a few days ago another one of my players was curious about Akroasia, and now we're planning another campaign there as well. So all in all summer camp will be an excellent way of expanding my world in a way that will bring joy to both me and my players.

I wish, I hope, I'm hyped for diamond! But I'm not going to use that as my goal. I'm thinking silver should be achievable, so that is 16 articles. Any more than that is just a bonus!

A thing or two

Just a few specific ideas I have that I want to write about, and I hope at least some of them will align with the prompts. Some things come from my to-do list, others are being spat out directly. 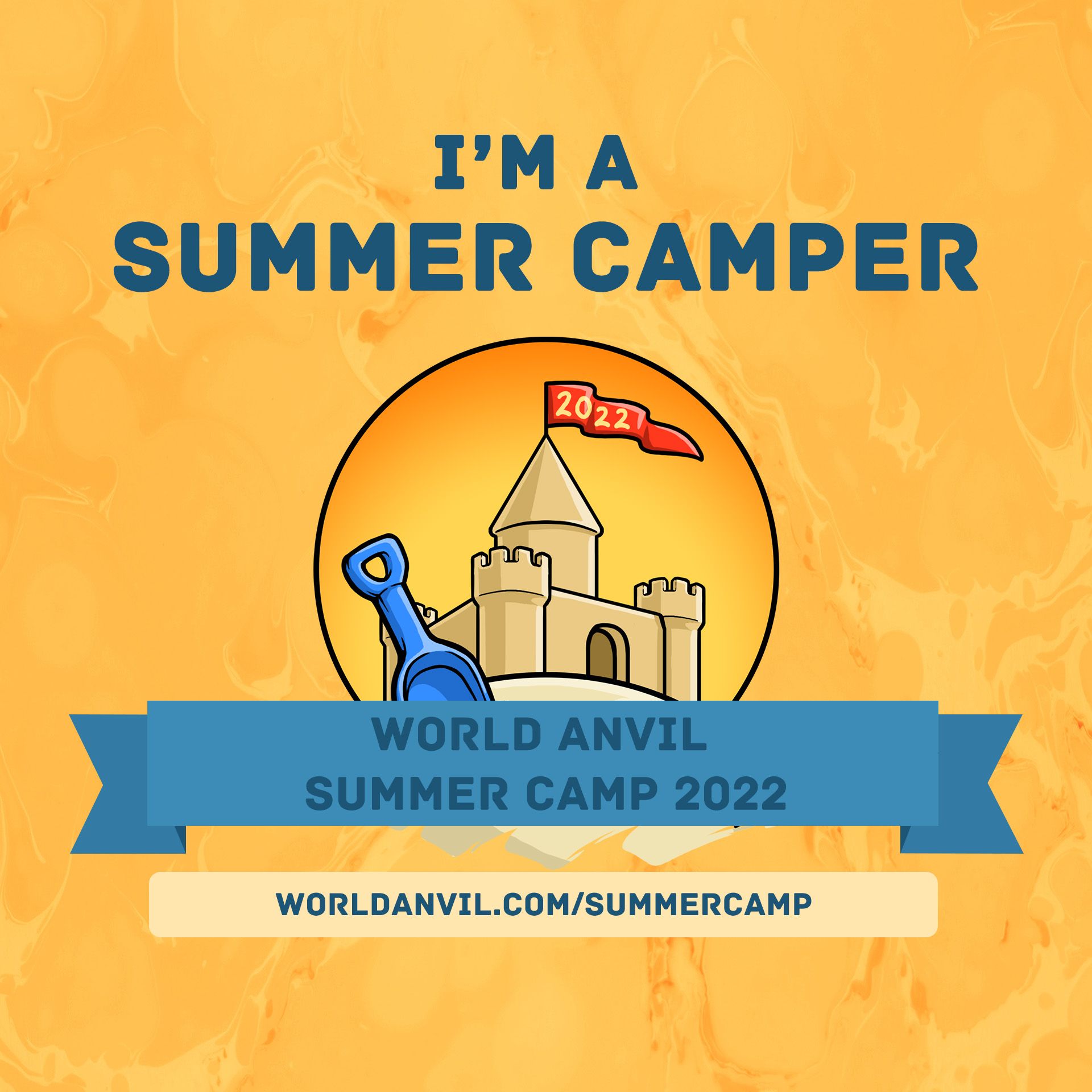 Great theme for expanding my moons. Wast fields of flames for Ies, endless icy spires for Jiana. I also don't think I have a single article about any of my world's oceans, so there's certainly some potential here.

This is what my campaign in Cadenar is going to be all about. There are so many factions both local and foreign, religious and criminal, noble and adventurous, and of course they all have leaders. Some factions will consist of only leaders. Probably going to be my favorite theme.

As mentioned earlier my goal is to expand upon two new continents and two moons. This is going to be all about discovery it seems! New locations, lost civilizations, a bit of self-discovery among the people living there?

I love me a good monster, whether it's a beast or a terrible person, they tend to add a whole lot of flavor to society. I think this theme will tie in nicely with the leadership theme. I'm going to add me some dragons too.

I primarily look at cool art online and listen to music to get the creative juices flowing, and so I'll have some of my most inspiring imagery and songs down below. I have many thoughts that are very abstract and I can't really describe in any reasonable way why I'm inspired by these, but the experience of them gets my fingers writing.

For the sake of building an asian inspired continent I've taken to watching some Chinese cinema and Korean series. Ying Xiong is one of my favorite movies and is always worth a rewatch, same goes for Chi Bi and IP Man. Now there's a surprising amount of decent Korean series around, thus far I've taken some inspiration from Kingdom, Bulsgal, and Aseudal Yeondaegi. I'm also continuously browsing the webs for sources on asian myths, legends, and monsters!

I am not a scheduling type of person. Yet there are habits within my spontaneous nature. If there is writing to be done it usually takes place just after noon or just after midnight. My plan is to write once a day at either of these two times. If I miss my noon appointment with myself, no worries, I will certainly make it to the midnight appointment. Less stress this way for a guy who doesn't normally plan things out very often.

As I think I have stated before I am primarily writing for me, and for the ttrpg games I run. With two new campaigns coming up after summer my friends and players will certainly help me through this marathon. I will likely follow the progress of others on the word anvil discord and the community tab here, but my own accountability comes down to me.

All images are either commissioned by me, or made by me using Inkscape, Gimp, MS Paint, Dungeondraft, and/or Wonderdraft. I also use Artbreeder. Any uncredited image is made by me.
Article template
Generic article
World
Harmony
Author
PrippyMontyPoppyCock
Publication Date
8 Jun, 2022
Creation Date
8 Jun, 2022
Last Update Date
26 Jun, 2022
Visibility
Public
Views
83
Favorites
11
Comments
0
Work In Progress