All Qhonian are female. To become pregnant, they must procreate with a male specimen of any sentient humanoid species. For a Qhonian's partner, mating is not usually an enjoyable affair. The pairing is painful, and even sometimes lethal to weaker males. For this reason, Qhonians are attracted to males that prove to be hale and hearty. While some Qhonian choose not to reproduce at all, the maternal drive is strong.   Their societal structure is usually democratic. Large groups of Qhonian with common interests will band together as equals. Occasionally a leader is chosen, and she is usually the oldest member of the group. Children are raised by the group collectively, with no special regard to the actual birth parent. Upon reaching adulthood, a Qhonian must decide if she will stay with the group or wander in search of something else. If she stays with the group, she will be expected to procreate in the near future. Qhonian who leave the group are shunned afterwards and may never return. Regardless of the Qhonian’s decision, her coming-of-age is celebrated and, if she does decide to leave, she is treated with kindness and respect until she does so. The Qhonian are a compassionate people, contrary to what some rumors would suggest.   Physical Description: Qhonian are Medium-sized, lithe, and pale female feykith. They have large orange eyes, translucent blue-white skin, and cat-like ears. Their hair is long, transparent, and nearly invisible when not lit by two luminescent antennae that flow from the top of the rusalka’s head and down either side of her body. A skirt of dozens of jellyfish-like tendrils sprout from a Qhonian’s waist, each tipped in blue luminescence. A Qhonian’s blood is likewise radiant, and her heart can be seen pulsing with red light in her chest. Despite their alien composition, most humanoids find the Qhonian to be hauntingly attractive.   Ability Scores: 18, 18, 14, 14, 12, 10. One of the 18s must be in Dexterity or Charisma, and the other cannot be in Strength but can otherwise be allotted to any ability score. The 10 cannot be allotted to Dexterity or Charisma.   Racial Buoyancy: -20   Depth Tolerance: 1,000 feet   Size: Medium   Speed: 30ft Swim, 20ft Land.   Vision: Darkvision 60ft, Low-Light Vision.   Glungs: Feykith can breathe both air and water through their mouth and noses, which is then processed through organs known as glungs. For game purposes, these organs function as both gills and lungs.   Cold Tolerance: Qhonian are well accustomed to the cold waters of the sea. Feykith receive a +2 racial bonus on Fortitude saves versus cold weather, severe cold, or exposure.   Feykith Resistance: Feykith have an immunity to sleep spells and effects. In addition, they receive +2 bonus to saving throws against enchantment spells and effects.   Blazing Blood: An injured Qhonian may choose to exude a cloud of luminescent blood once per hour. The glowing red patch spreads out in a 10-foot-radius cloud that provides total concealment and persists for 3d4 rounds. It may also attract hungry predators.   Bioluminescent: The Qhonian can (at-will) cause her antennae to shed as much light as a torch.   Seducer: Qhonian add +1 to the saving throw DCs for their spells and spell-like abilities of the enchantment school. In addition, Qhonian with a Charisma score of 15 or higher may use charm person once per day as a spell-like ability (caster level is equal to the user’s character level).   Stinging Skirt: A Qhonian’s tentacle skirt is capable of draining the life out of those it touches. Each creature that begins their round in the same square as the Qhonian loses 1d4 hit points. Each round that the Qhonian drains hit points in this manner; she heals herself for 1 hit point of damage. This effect is voluntary on behalf of the Qhonian, she may chose not to drain hit points.   Languages: Qhonian begin play speaking Common and Qhwel. Qhonian with high Intelligence can choose any of the following: Aquan, Ceti, Cephalite, or Delatari. 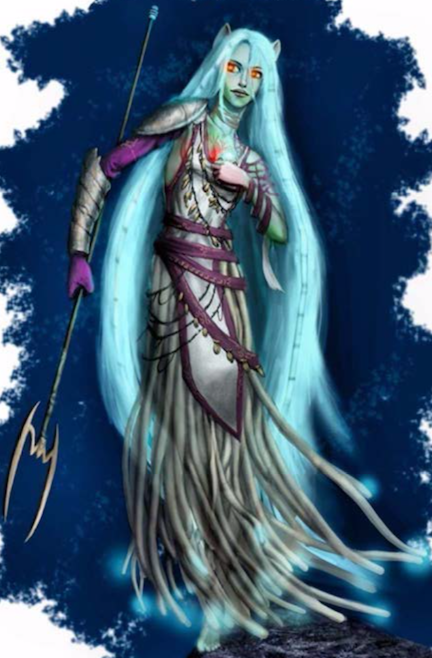